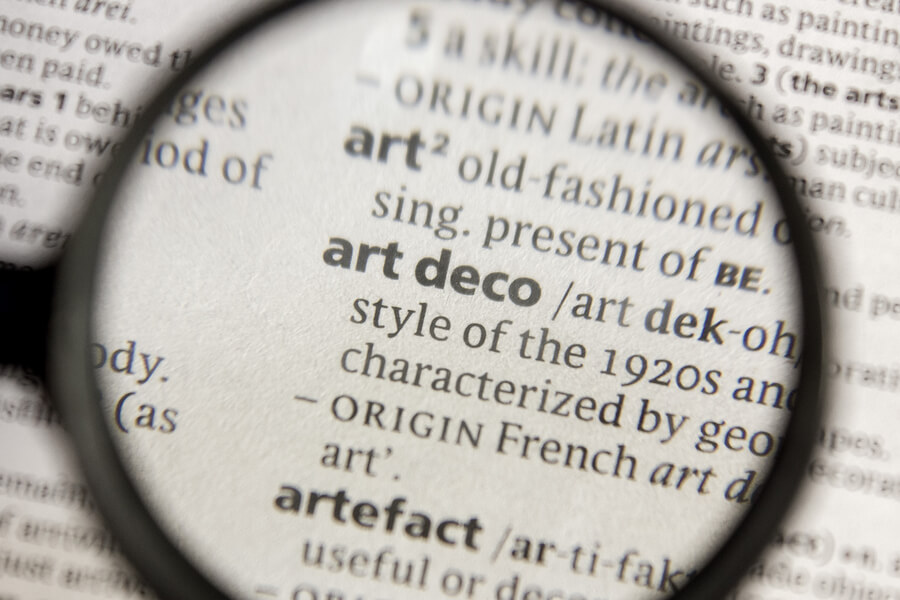 The Art Nouveau and Art Deco movements both were outgrowths of significant world events: the Industrial Revolution and the aftermath of World War I respectively.

Both were influenced by ancient, newly discovered art forms.

Japanese art, sequestered within its own borders for more than 200 years, was an inspiration to the Art Nouveau jeweler-artists with themes of nature rendered in simple yet exotic lines.

Egyptian and Mesoamerican excavations unearthed the art of ancient civilizations and inspired Art Deco jewelers with its geometric designs and the sumptuousness of its artifacts.

The jewelry produced in those eras, however, is quite distinctive, and with a brief overview of each, you will be able to distinguish between the two.

As the 19th century drew to a close, the sometimes-harsh effects of the Industrial Revolution gave rise to a nostalgia for the “good old days” (which seldom were in reality), a time that was simpler, gentler, in tune with nature.

Jewelers met the mass-produced jewelry spewing out of machines with increased artistry. It was the time when jewelers transitioned to artists. Rather than merely set stones, they created pieces of jewelry that were works of art. And they found a wealth of inspiration in the previously unknown Japanese art that portrayed nature with exotic yet simplistic lines and the signature “whiplash curve” that infused the gracefulness and rhythm of nature with forcefulness.

Art Nouveau themes inclined toward flowers and plants, birds and insects, swans and peacocks. Dragonflies and butterflies were especially popular as dramatic metaphors for the different stages of life.

The designs of nature had an air of calmness and fluidity that followed through with a color palette of pastel colors, such as a seafoam blue, dusty rose, celadon green, and barely-there earth tones.

The jeweler-artists continued to use gold but ventured into more unconventional (at the time) materials, such as horn, ivory, amber, glass, and tortoiseshell.

In keeping with the overall theme of Art Nouveau jewelry, softer-looking stones displaced large diamonds for the most fashionable ladies: moonstone, amber, coral, large and irregularly shaped baroque pearls and iridescent opals in free-form shapes so ideally suited to enameling.

Arguably, the quintessential technique of Art Nouveau is enameling with its use of subtle colors and swirling designs often derived from nature.

Of the various types of enameling, -a-jour was the most coveted. The enamel was applied in cells, and the finished piece had no backing, allowing light to shine through the translucent enamel. It was a precious, miniature version of stained glass.

Think “loud and proud,” opulent and extravagant, sleek and sassy.

Unlike Art Nouveau, Art Deco embraced the machine age and the accompanying advances in technology and economic prosperity. The war had been won. There an abundance and sense of freedom not seen since, perhaps, the French Revolution.

Planes and luxury ocean liners made the world smaller, as people traveled to foreign lands and great expeditions unearthed the accouterments of ancient civilizations in Egypt and Mesoamerica, e.g., the opening of King Tut’s tomb and the discovery of bas relief carvings of pre-Columbian cultures.

It was characterized by sharp geometric shapes, such as chevrons, cubes, spheres, and sunburst patterns—exotic motifs inspired by exquisite antiquities as well as Modern Art with the angularity of Cubism and the kaleidoscopic color schemes of Fauvism for vivid pops of color, particularly bright red and deep turquoise.

While diamonds (both real and synthetic) resumed their popularity, they shared the spotlight with colored or opaque gemstones (again, genuine and artificial).

Rubies, sapphires, and emeralds were very much in vogue. Onyx, ivory, jade, lapis lazuli, coral and turquoise were the rage amongst the youth who wanted to forge their own styles (and who could only afford the less expensive stones.)

White metals were in fashion, platinum above all due to its malleability, durability, and resistance to tarnish. White gold was invented as a less expensive alternative to platinum.

Newly invented chrome, stainless steel and even bakelite (the first synthetic plastic) worked beautifully with all stones, from the precious to the quirky.

The defining technique of Art Deco jewelry was filigree; a delicate lace-like design created thanks to the strength of platinum. Usually, the openwork design features flowers, leaves, or swirls and gemstones.

A “cheat sheet” to help you identify Art Nouveau and Art Deco jewelry.

Of course, you won’t have to wonder “Is it or isn’t it?” when you have the expertise of a reputable dealer to rely on.

There are mountains of fakes around. It may simply be that a particular dealer isn’t knowledgeable enough to know the difference, but then there are the dealers who sell fakes knowingly. We have to hope that those dealers do not stay in business long.

Click on Tips for Shopping for Vintage Jewelry for ways in which to choose a trustworthy and conscientious dealer.

If you have any questions, please leave them in the comments below, I always answer 🙂