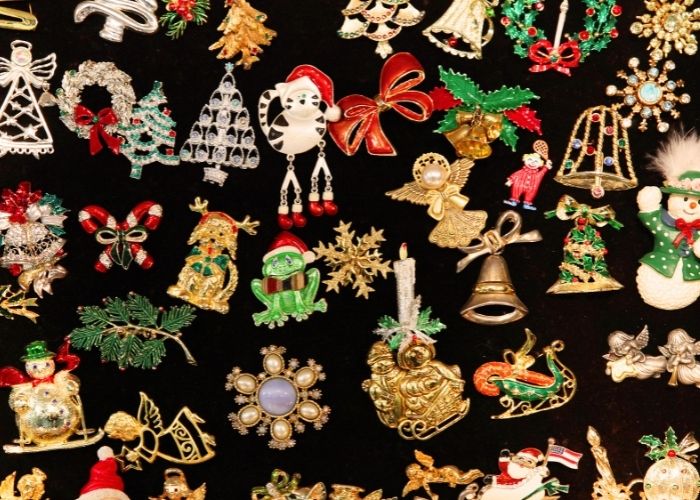 Looking for vintage Christmas jewelry? Learn about the history, designers, and where to buy in this guide.

Since Victorian times, people have worn decorative items to show their excitement for the Christmas season. At first, women wore somewhat fragile corsages of fresh sprigs of holly or pine, berries, and colorful ribbons. These were gradually replaced by durable costume jewelry. First were Christmas tree pins and soon women were wearing beautiful, shiny wreaths, angels, snowmen, holly, sleighs and bells as necklaces, bracelets and earrings as well as pins. 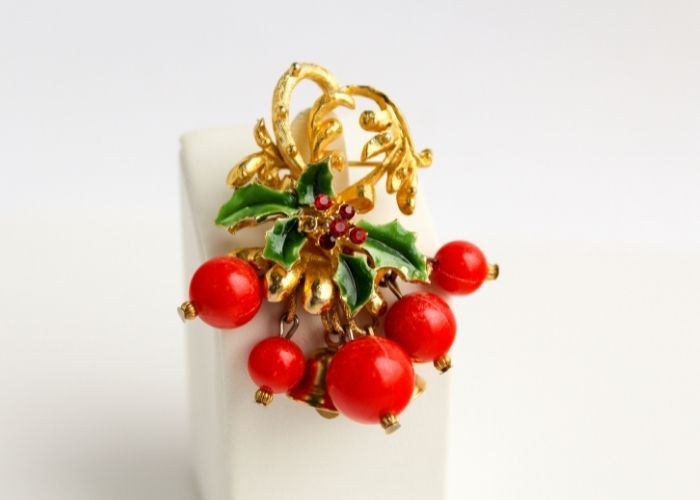 A Brief History of Christmas Jewelry

The celebration of Christmas began as a way for Christians to fit their religious rituals into established pagan ones. The rowdy Roman Saturnalia festival marked the winter solstice, but a small Christian sect incorporated into it the birth of Jesus Christ. By the 6th century, Christianity was the official religion of the Roman Empire and Christmas was an official holiday.

During the Middle Ages, Christmas was celebrated for 12 days. People were off from work, homes were decorated and gifts exchanged. Church services included bountiful feasts, merry singing and dancing, and games.

In 17th century Germany, people decorated evergreens in honor of Christ's birth and eventually they decorated trees with candles and fruits and nuts. As Germans emigrated to other lands, they took the customs of Christmas with them.

When the German Prince Albert married Queen Victoria, he introduced her (and all of Great Britain) to Christmas trees. In the late 1840s, a depiction of Victoria and Albert and their family around a decorated evergreen tree made the custom fashionable, The English and Americans were among the first to adopt the custom and add their own touches.

By the 20th century, American women were wearing corsages made of sprigs of evergreens and berries adorned with colorful ribbons during the Christmas season. Following World War II, costume jewelry replaced the corsages. Certainly, Christmas of 1946 was especially festive after the difficulties of life during the war and, before that, the Depression. And with the resulting prosperity, it was not only the wealthy who could afford the seasonal jewelry.

As far as we know, it was Stanley Hagler who was the first jewelry designer to create a lucrative business with his Christmas creations.

Stanley originally worked for Miriam Haskell as a business advisor until, on a whim, he decided to design a piece of jewelry. From then on, he worked as a jewelry designer for her, and later opened his own jewelry company. He is credited with inventing the Christmas tree pin. Whether he did or not, he definitely was the jeweler who popularized it during the late 1940s. His pins were ornately adorned with red and green rhinestones or Murano glass. One of his most magnificent was a mother-of-pearl tree with red-glass flowers. 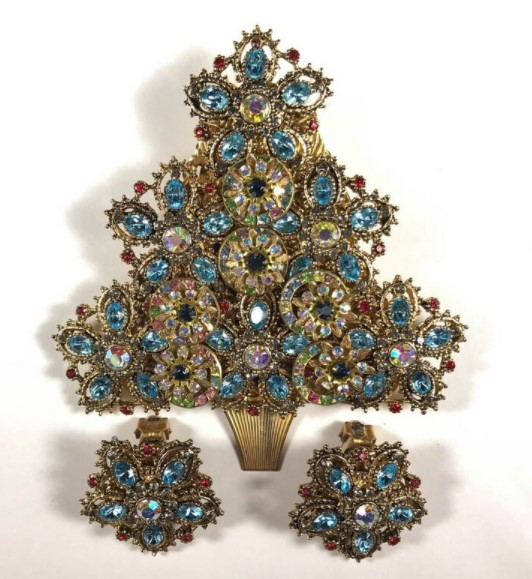 This set from the 1960s is extremely rare, and it is signed. The brooch measures 4 inches by 3¾ inches, the earrings 1¼ inches by 1¼ inches.

Larry also began as a jewelry designer for Miriam Haskell—years after Stanley Hagler. He went out on his own in the 1970s and began designing costume jewelry for the stage. For that reason, his pieces tend to be large and bold, so they can be seen throughout the theater. His Christmas tree pins were as popular as Stanley’s, and they were designed with large cabochons, aurora borealis stones and rhinestones. 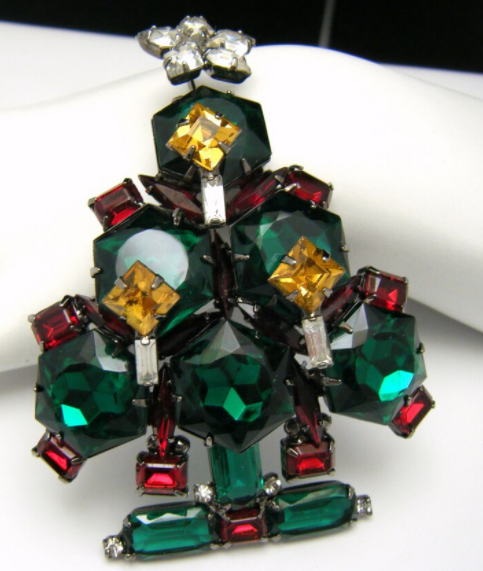 This extravagant brooch dates back to the 1960s.  The rhinestones and glass are set into a gunmetal gray setting. The brooch measures approximately 3 ½ inches by 2 ½ inches and is signed.

Marcel began designing jewelry for Cartier, first in Paris, then in New York City. During the Depression, when fine jewelry was not in demand, he worked for Mazar Brothers making affordable copies of high-end jewelry. He and a colleague opened Marcel Boucher & Cie in 1944, continuing to produce costume jewelry. Marcel was known for intricate metalwork, rhinestones that could pass for precious gems, and his enamel work. He also fancied mechanics and some of his pieces had moving parts. Lucky the collector who finds any of those! 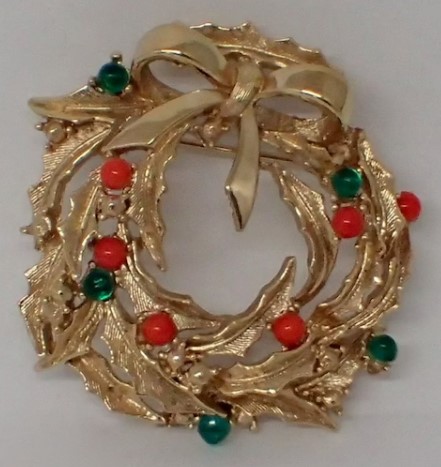 This signed and numbered Christmas pin from the 1960s is a fine example of Marcel’s penchant for meticulous detail work. Made with green glass cabochons and a gold plate setting, the pin measures approximately 1½ inches by 1½ inches.

Coro (owners Emanual Cohn and Carl Rosenberger) was one of the largest manufacturers of beautiful and affordable costume jewelry in the United States from 1919 to the mid 1970s, including Christmas jewelry. The partners were merchants, so they hired Adolph Katz as Director of Design to hire talented designers and oversee the styles of jewelry created. 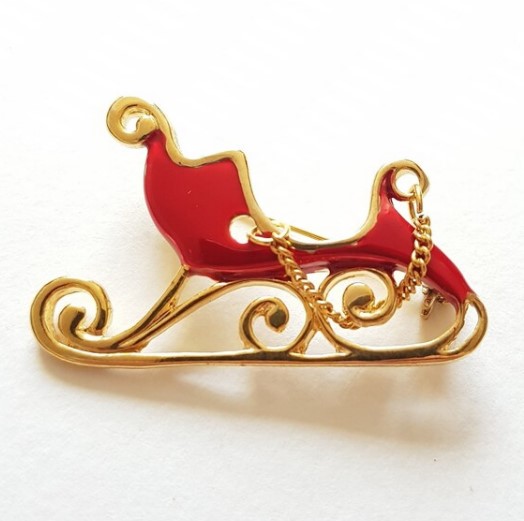 This Coro brooch was created during the 1950s or 1960s. The Christmas red enamel is set into gold-tone metal. Measures 1 ¾ inches by 1 inch.

Albert designed jewelry for Coro in the 1930s. He excelled at floral and figural brooches and earrings. He went out on his own in the 1950s. He is best known for his use of smoky (“black diamond”) rhinestones and was one of the first to use Swarovski’s aurora borealis crystals. Collectors celebrate when they find an enamel or japanned piece, which was a stunning combination with the jewel-tone rhinestones. 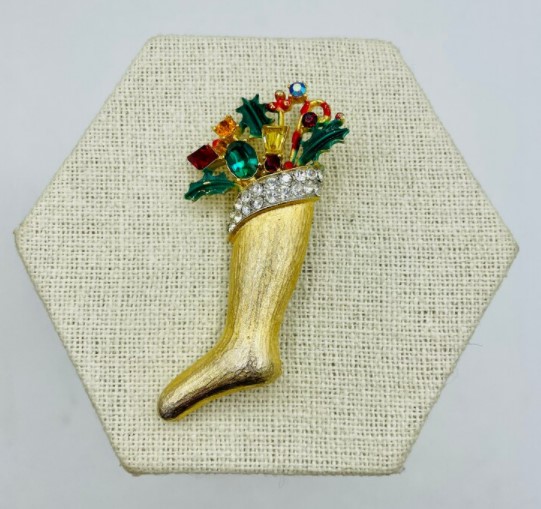 From the 1980s, this Christmas stocking brooch features rhinestones, green enamel leaves, and a candy cane.

Hattie Carnegie came to America when she was a teenager. She worked for Macy’s until she could open her own clothing shop in 1909. She was very successful, and in 1939, she added costume jewelry to adorn her fashions. The jewelry became even more popular than her clothing. 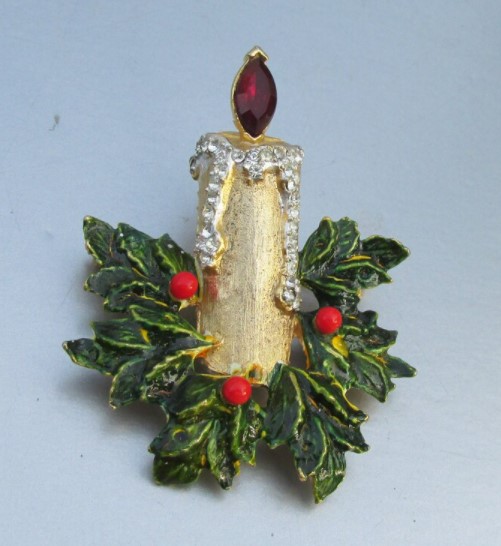 A signed vintage pin from the 1960s. 2 1/4" tall with enamel holly at the base, tiny dripping rhinestones, red cabochon berries and a dark red marquise rhinestone as the flame.

Gustavo Trifari established his jewelry company in 1925 and, mostly, his clientele was the glitterati of Hollywood. After World War II, he, as the other designers, created Christmas jewelry—but with a marketing twist. He made a limited number of pieces to increase the demand and the value. His Christmas trees were more refined and less garish than many others, but it was his “Partridge in a Pear Tree” that stands out as one of the most collectible and coveted Christmas pieces. He was inspired by the 1949 recording of The Twelve Days of Christmas by Bing Crosby and the Andrew Sisters.

Trifari Partridge in a Pear Tree 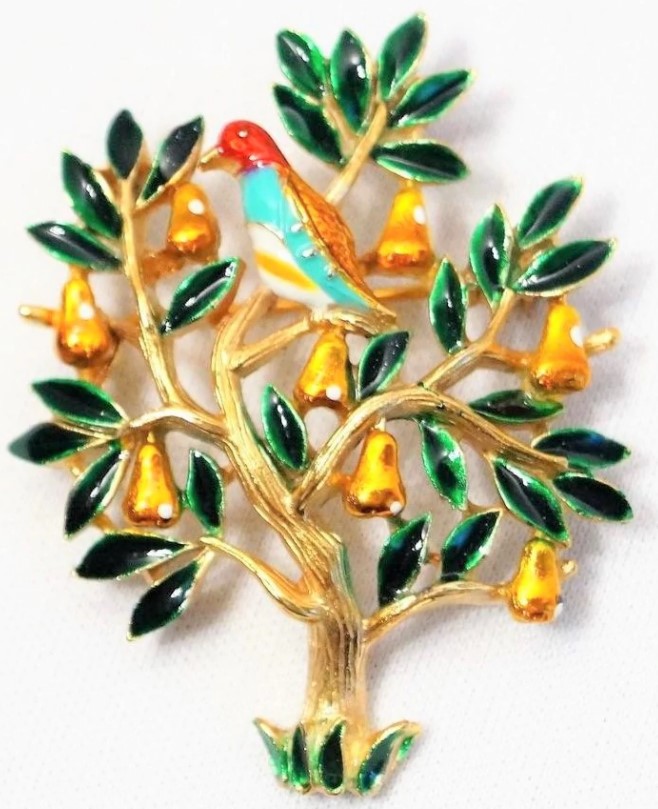 Trifari Partridge in a Pear Tree Pin Brooch from minkroad.com

This signed brooch dates back to the early 1950s. It is made up of enamel and Trifari’s own gold plating, “trifarium,” and measures 2 inches by 1½ inches.

There are some very helpful books to scour before going out shopping and to refer no matter how experienced you become: