Intricate and ornate, Miriam Haskell jewelry is known for their artistically designed looks. These pieces are conversation starters, as they are big, bold and beautiful! In this article, you will learn about Vintage Miriam Haskell Costume Jewelry, the history, materials, marks, most collectible pieces, and tips on how to buy.

Miriam Haskell was born in Indiana on July 1, 1899. Full of creativity and a business drive, Miriam moved to New York City in 1924, after completing three years at the University of Chicago. It is said she had $500 to her name when she moved, which proved to be enough to open a gift and jewelry boutique in 1926. This first store was located in the old McAlpin Hotel on Sixteenth Street. Within the year, Miriam opened her second store on West 57th Street.

It is said that Miriam was the business brain behind her company, adding a creative partner shortly after that first shop opened, Frank Hess. Hess was previously a window dresser from Macy’s, but Miriam saw his greater talent: jewelry design.

While Miriam may have designed some of the earlier pieces, many feel it was Hess who was the true creative genius behind their jewelry. Together, they put out affordable costume jewelry from the 1920s to 1960s, when a new creative director joined the company.

Miriam’s popularity continued to grow, with an expansion to 392 Fifth Ave, a location in Saks Fifth Avenue and Burdines Department Store. They continued to spread to Miami and London. With this exposure, they gained a large celebrity clientele.

Stars such as Joan Crawford, Lucille Ball and the Duchess of Windsor were often seen wearing Miriam Haskell jewels. Lucille Ball even wore some pieces on her major television show, I Love Lucy! Joan Crawford is rumored to have owned almost all of the pieces Miriam ever made! 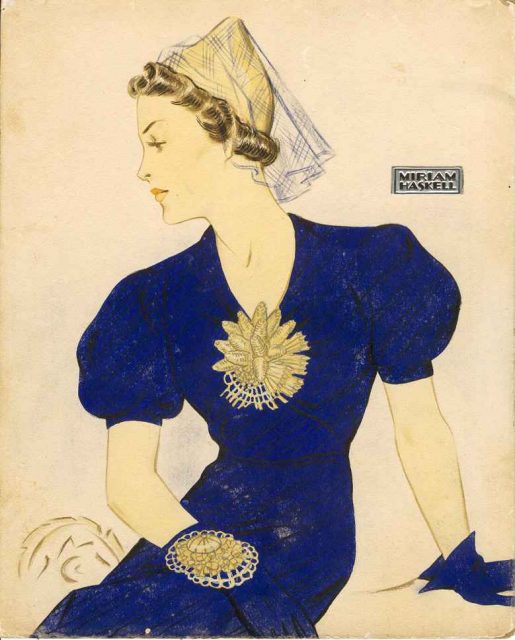 Another creative outlet to come out of the the Miriam Haskell house is that of their use of watercolors for advertising. Artist Larry Austin painted unique watercolor advertisements, designed by Frank Hess, between 1930s to 1940s. These pieces are quite collectable these days.

Her necklaces were the most sought after of the varying types of jewelry. She sold many faux pearl strands, varying from single to multiple strands.

Not only were her jewelry pieces very embellished, as are the findings, such as clasps. You’ll see these clasps ornately decorated with faux pearls and a filigree design decorating the ends of necklaces.

Pins were her most freest in terms of design. While you certainly will still see the floral themes, you’ll also find animal and shell designs as well as freeform filigree pieces. 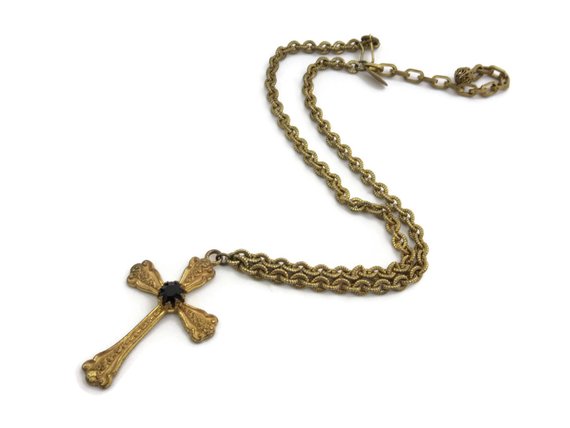 Similar to other costume jewelry, Miriam Haskell pieces used faux pearls, faux gemstones and rhinestones, set in gilt base metal findings. Many of her pieces include crystal and glass beads. They also really enjoyed using rose montees. This is a precut crystal, the rose component, which would be mounted in a silver setting, the montee component. This piece would have a hole or a channel in it so that the piece would be sewn into a garment or attached to another piece of jewelry. 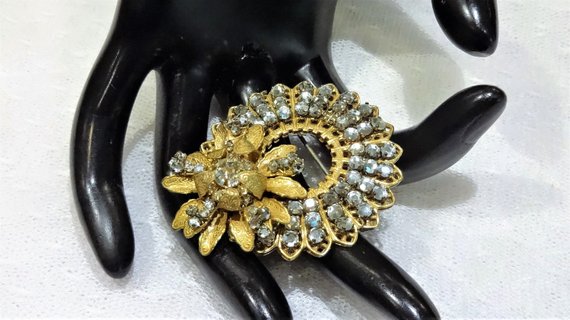 How to Identify a Genuine Miriam Haskell Piece

Many of Miriam’s pieces went unsigned until the 1950s when her brother Joseph took over the company. We aren’t really sure why she didn’t sign her pieces, but some say it is due to the fact that she rarely did the designing herself.

Purchasing an unsigned piece of jewelry might sound risky, and frankly, it can be. Be sure you are purchasing from a reputable source. You can also look online to see if you see images of those pieces with sourcing citing they are in fact Miriam Haskell designs.

The book, “Miriam Haskell Jewelry” by Cathy Gordon and Shelia Pamfiloff is a great resource that includes examples of her work. Larry Austin’s watercolors are also a good source for finding examples of Miriam’s pieces.

Some of the first signatures we see are of a semicircular plaque, shaped like a horseshoe. This was attached to the back of some pieces around 1947/48. After the 1950s, this was changed to a flat oval shape with ‘Miriam Haskell’ stamped on it. The stamp went through to the other side, showing a reverse imprint, which could be seen when it was used as a hangtag.

During the 1980s this was changed to a flat back where the signature was not seen on the reverse side. Some pieces produced during the 1990s included an identification number.

Clasps are an important element in identifying Miriam Haskell jewelry.

Pieces that are highly collectible and rare include:

Miriam Haskell can be purchased at many vintage and estate stores and shows, but I enjoy shopping from home on either Etsy or eBay.

Some tips for shopping for vintage jewelry Online:

Some excellent shops on Etsy include:

Miriam Haskell pieces are such a great statement piece of costume jewelry. Well made and uniquely designed, these bold, ornate pieces will be a perfect addition to your collection!

Please leave any questions you may have in the comments below, I always answer!