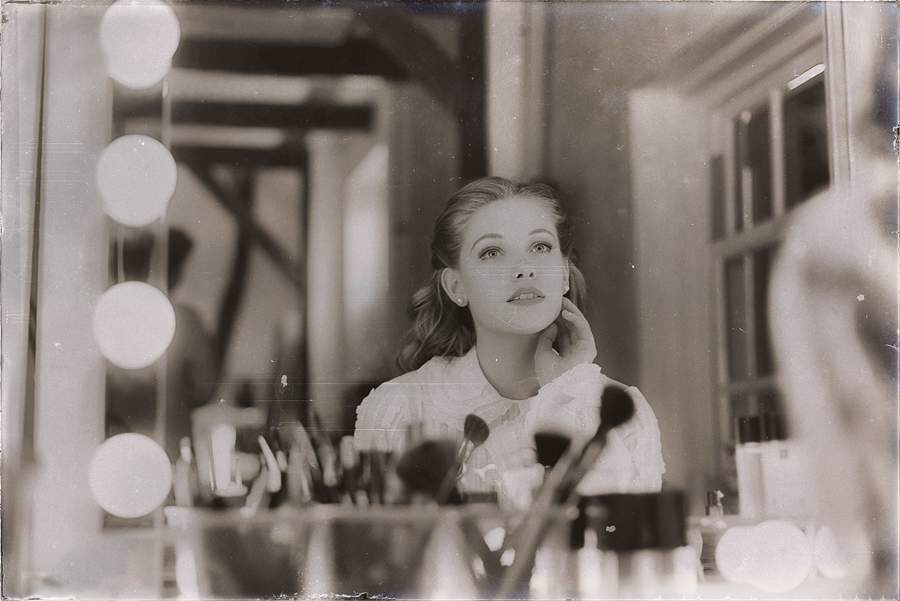 The decade of 1940 witnessed one of the greatest events in the world’s history – World War II (1939 to 1945). As the period of the Great Depression was ending, the world was sinking into a new turmoil, WWII. Fashion trends and jewelry industry were also significantly affected by the distress created by this global war and the uncertainty over its outcome.

America and Hollywood influenced the style of the 1940s with the European fashion industry hit hard by the war. Bright, bold, and cheerful colors made their way in clothing and jewelry to take the wartime gloom away.

Hollywood actresses were all over on the front cover of fashion magazines wearing designs in bright dazzling colors, sporting relaxed looks instead of wearing the usual French haute couture. These actresses wore cheaper costume jewelry from America and became brand ambassadors of this ‘cheap costume jewelry’ which was affordable to masses.

Jewelry industry saw major changes effected by the war, restrictions on the use of metals, and scarcity of materials. As the war progressed, there was a shortage of the metal supply due to its restriction to war use. Imported faux pearls, high-quality imitation gemstones from central Europe, and even the skilled labor were in short supply. Eventually, Sterling silver replaced other base metals for jewelry making.

The gold plated jewelry quenched the desire to wear fine jewelry without being heavy on the pocket. Vermeil, a type of gilded silver was plated with gold and resulted in a warm golden finish. Due to its appearance and low-cost, it became a popular choice for costume jewelry. 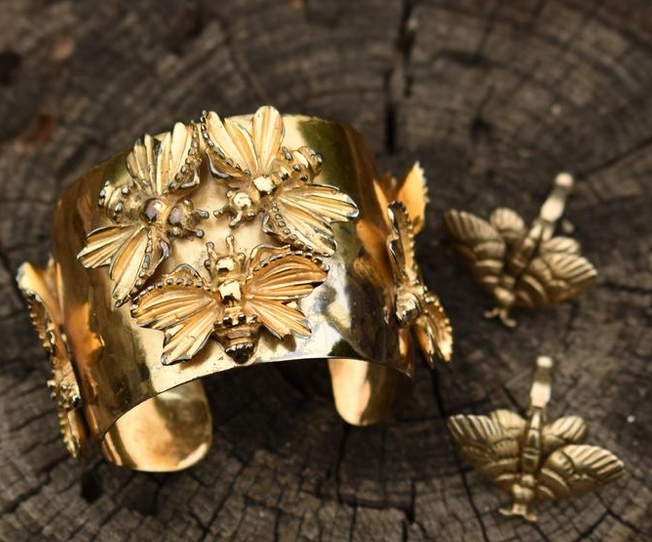 Miriam Haskell and Alfred Phillipe's innovative jewelry designs using plastic and wood replaced fine quality stones and crystals. Plastics such as Bakelite, Lucite, and Catalin and other materials such as wood, leather, natural shells, plaster, and ceramic were used in producing cheap costume jewelry. Rhinestones were used to add a sparkling shine to the jewelry.

Bakelite jewelry available in a wide range of bright and attractive colors and low prices made costume jewelry affordable to masses.

Jelly Belly, a creatively innovative jewelry design pioneered by Trifari in the 1940s. Made out of polished Lucite, the designs were usually of animal figures such as elephants, penguins, and poodles. Large-sized Lucite cabochon appeared like rock crystal and thus gained popularity. It is a must-have for many vintage costume jewelry collectors. 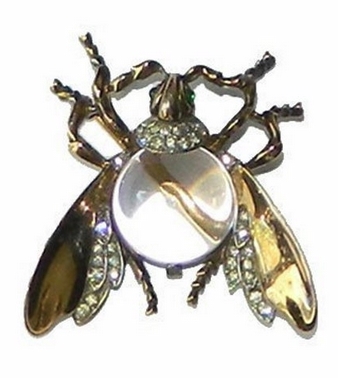 Catalin, another type of plastic also gained popularity at this time. Catalin could produce marbled effects and translucent hues and gave a strong competition to the vivid shades available in Bakelite.

Flower Motifs: Jewelry in the 40s evolved to be more feminine with the addition of flower motifs. Miriam Haskell created beautiful flower designed jewelry in bright unusual color combinations and bold shapes using wood, beads, and shells. Women often styled these flowers by hand-sewing these at home which gave it a personalized touch. 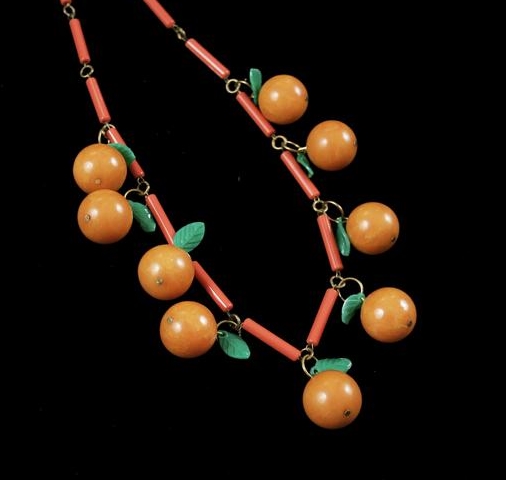 Fruits and Vegetables: Amusingly, fruits and vegetable designs also served to be a fashionable jewelry choice. Red Cherry was the favorite and the number of designers used it repeatedly in their creations. Other fruits such as banana, grapes, oranges, pears, and vegetables such as carrot and sweet corn were also preferred for jewelry designs.

Natural Shapes: Like the last decade, natural shapes and forms continued its popularity in the 1940s too. Motifs of feathers, birds, insects, and leaves were used commonly in costume jewelry designs.

Patriotism: Wartime lead to patriotism reaching its peak and reflected in the jewelry designs. Brooches with patriotic symbols such as airplanes, propellers, flags, eagles, drums, trumpets and military insignias, and slogans such as ‘V for victory’ became very popular. Designs and colors of the flag - red, white, and blue also became popular to lift the gloomy spirits to rise higher.

Mac Arthur Heart Pin: One of the most prominent jewelry designs from this era and favorite of collectors is MacArthur Heart Pin. The heart was symbolic of love, hope, unity, and of course, patriotism. The pin was first featured on the cover of “Life” magazine in 1941 and gained popularity thereafter. 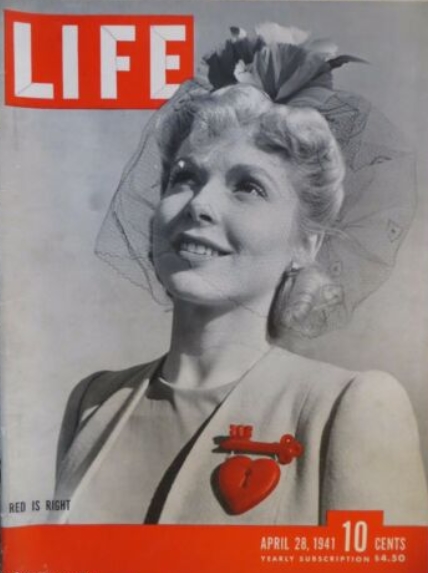 It is said that during WWII, women used to donate their fine jewelry/precious metals for the war effort and would buy plastic jewelry as a sign of patriotism and in a hope that their men would return home safe.

Many necklaces and bracelets also adorned hearts with arrows or key designs.

Apart from these, many jewelry designs were also inspired by Aztec Folklore, Native American and Old West styles.

Bracelets and bangles remained popular items of jewelry in this era too. Charm bracelets, Identification bracelets, and Wide panel bracelet were the most popular styles of bracelets in this decade.

Charm bracelets were made up of a thin silver or gold chain with different trinkets and charms attached to it. It was a rage among teens. Ladies and teens collected charms to attach them with their bracelets. Adding charms to the bracelets personalized it for the wearer, thus making it special.

Identification bracelets were made of a thin metal chain and a flat metal in the shape of a rectangle or oval was attached in the center which would have a name engraved on it. Gold-tone was preferred more, however, both silver and gold tones were used in its making.

Wide paneled cuffed bracelets in sterling silver, gold tones were a popular style and worn as a statement piece. Natural shapes and figures, gemstones, heart shapes with intricate details were encased in the panels.

Plastic, wooden, and gold-tone bangles, thick or thin remained popular in the 40s too with women stacking them in multiple on their arms. 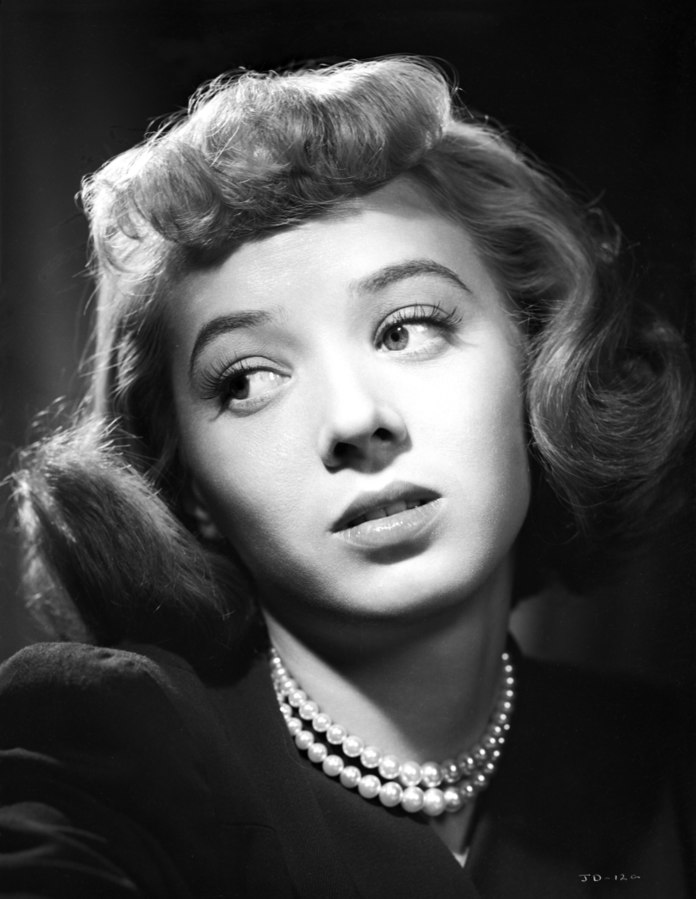 Long necklaces from previous decades were replaced by shorter necklaces which adorned the neck just above the clothing neckline. Long necklaces were shortened to 16 inches.

Plastic, Lucite or glass beads in multiple hues and shapes were used, however, round beads topped the list. Necklaces usually had large-sized beads, and smaller beads with braided or rolled designs and multi-stranded beads necklace were also popular.

White on white styled, pearl, and clustered rhinestone choker necklace were favored for the evenings.

In the late 40s, Bib necklaces with oversized matching earrings saw a surge in popularity as the jewelry designs were getting bigger and bolder. Due to wartime, locket necklaces became popular with all age groups which were earlier referred to as a teen item. Locket, usually in the shape of a heart had the picture of the wearer’s love one.

Brooches and Pins designs were on the lines of popular themes of this decade such as floral designs in different materials, mostly hand-made by women.

Nature-themed JellyBelly pins were a new style of animal figural pins that were favored by many.

Pearl and heavy rhinestones big sized brooches were coordinated with the evening outfits for a glamorous appeal. Double-clip brooches from the last decade continued with their popularity.

Clip-on earrings in large round or button shapes were popular along with hoops and cluster earrings. They were often accompanied by a matching brooch.

The popularity of cocktail rings dates back to the decade of 40s when wearing a cocktail ring in a cocktail party or any special event became a must. The big-sized stone was skilfully cut to imitate any precious or semi-precious stone and thus creating an illusion of wealth.

Wearing cocktail rings had its advantages. It could be worn as a statement piece and made the wearer feel rich without spending anything much in buying it.

Another popular ring style was a simple band with birthstones and engraved initials, which was worn by girls until their marriage.

Wedding rings had simplistic designs with an arrangement of hearts or flowers. Pair of two bands were also popular with one band having a quite simple design, and the other one having a diamond or clear gemstone in the center and smaller stones at the sides. These could be worn separately or stacked together. This style retains its popularity even today.

Where to Shop for 1940s Jewelry

Jewelry styles of the 40s are bound to leave you impressed in a quite unconventional manner with emotions of patriotism, respect, love, unity, and safe homecoming of loved ones reflected through jewelry. Somewhere, these jewelry styles also speak about people’s sacrifices and challenges they faced during the difficult period of WWII.

And therefore, adding jewelry pieces from the decade of 1940s to your vintage jewelry collection is a must.

Etsy and eBay provide the best shopping experience for buying 1940s jewelry. These are the easiest, safest, and most-trusted platforms for online shopping. Etsy and eBay make shopping enjoyable, hassle-free with a multitude of options to choose from.

So, click on the links above and add more to your vintage collection from the historic decade of the 1940s!