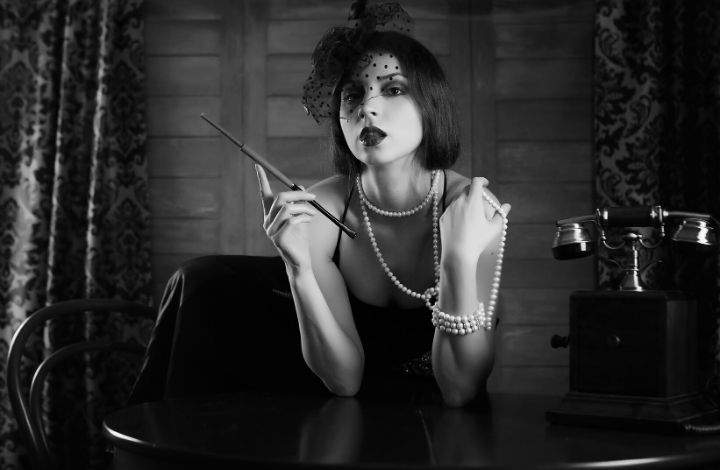 When the stock market crashed in October 1929, the world was taken aback. The Great Depression changed the world which included the fashion industry too. Every sector from clothing to jewelry began to struggle as necessities of life became a priority and luxuries were given a back seat.

By 1930, the silent movies were replaced with sound filled movies, and spending time in theatres made a way out on people’s list of leisure activities. Spending time watching movies became a way to escape from one’s troubles. Hollywood’s influence on fashion rose immensely as the movie industry created a desire for glamour and inspired women to wear more jewelry. 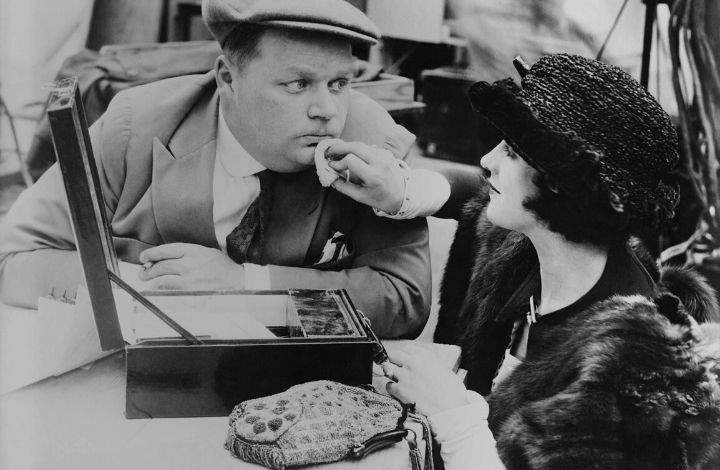 Many of the costume jewelry pieces of this decade are known for being whimsical and imaginative due to the influence of Surrealism on designers, and the increased use of colorful, inexpensive plastics such as Bakelite, molded glass, rhinestones, imitated gemstones and fake pearls that became popular during this period.

In the 1930s, as Hollywood movies became increasingly popular, actors and actresses became the most influential fashion figures. Sparkling clear jewels and gems looked better on the screen than colored stones and gems. Therefore, to stand out on screen, actresses covered themselves in glittering jewelry from head to toe. Sparkling jewelry became the rage – the more sparkle, the better! 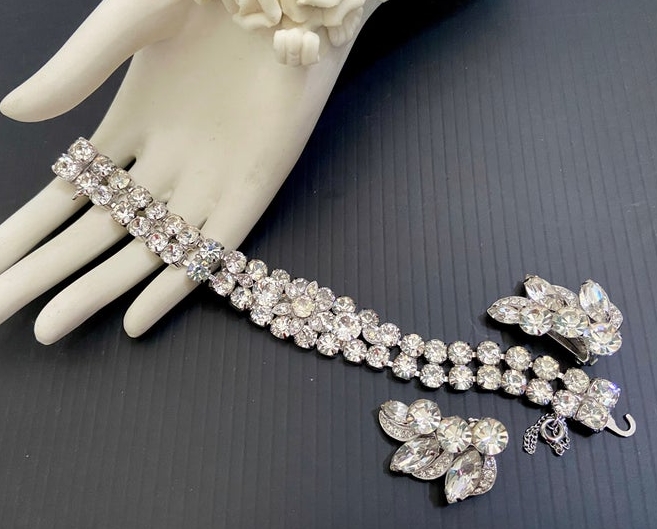 The Great Depression and demand for sparkling accessories collectively lead to a surge in the popularity of costume jewelry. Eisenberg, as a marketing campaign to increase the sales, produced free costume pins with each outfit. And later it became so popular that many designers and dressmakers started selling coordinated jewelry with their line of clothing.

Clear rhinestones set into zinc and nickel silver created affordable costume jewelry which imitated the trend perfectly. White gold, platinum, and pale silver were used as a base in creating fine jewelry. 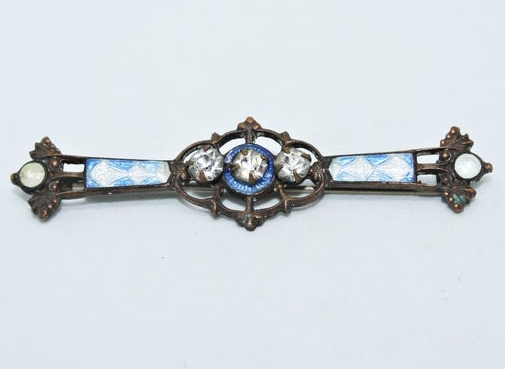 To achieve maximum sparkle, stones were set closely together, or were produced using ‘paste.’ The paste was made from ground glass heated with other elements and mixed to form a paste – hence the name. It became an incredibly popular method of producing imitation gems and would remain so for the next few centuries. ‘White on white’ style was also another way used to achieve higher sparkle.

The use of floral and nature motifs such as birds, feathers, flowers, and leaves was a popular trend in the latter part of this era. Perhaps the most popular of this style is the ruby and diamond feather brooch by Van Cleef & Arpels, given to Wallis Simpson in 1936.

During the art deco period, stars and moons, celestial motifs were frequently seen in jewelry and accessory designs. Chanel was so inspired by star motifs, that she designed jewelry in the early years of the decade with beautiful clusters of shooting stars. 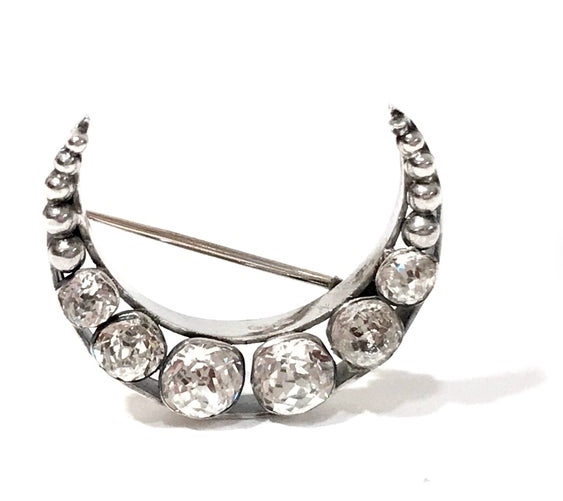 Shapes ranging from squares to ovals to rectangles experimented with gem settings. In the early 30s, these were set in the black base, however, set in silver became the preference by the end of the decade.

Towards the end of the decade, styles became more naturalistic, moving away from the earlier geometric shapes and sparkle.

To the surprise of many, mixing and contrasting colors is not a millennial trend but promoted by 1930s fashionistas. People loved to create a statement by contrasting colors within their jewelry. For instance, they would intentionally layer sharp beads with flashy dress clips to catch other’s attention to themselves. However, people made sure to color coordinate with their evening outfits.

As promoted by Chanel in the 1920s, long strands of pearls became popular once again. They were everywhere, be it necklaces, bracelets, earrings or brooches. They could be worn in so many ways proving that they are a timeless jewelry item.

Also in the 1930s, the baskets of fruit and flowers (known as fruit salads or tutti frutti) marketed by Cartier and other fine jewelers produced a wave of imitations among costume jewelry makers. Companies such as Coro, Trifari and Boucher and others, produced costume jewelry made with molded glass that imitated the rubies, sapphires, and emeralds. 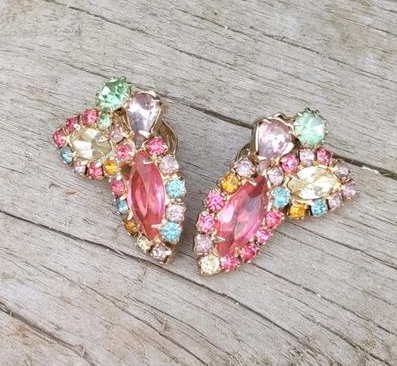 Gemstones were the most coveted alternative to diamonds, as they were affordable, available in plenty of shades, and could be personalized as per the preference. They were a perfect option for daily wear providing a glamorous feel at the same time.

The ‘bobbed’ cut faded with the end of the 1920s. The women returned to a more feminine look by growing their hair longer with soft waves and curls, a look which accentuated their beauty. Long hair resulted in fuller hairstyles which were decorated with accessories inspired by Hollywood.

Sparkling combs and barrettes were encrusted with sparkling clear rhinestones and fake pearls. These accessories added an eye-catching flash to a lady’s hair, sure to get her noticed. 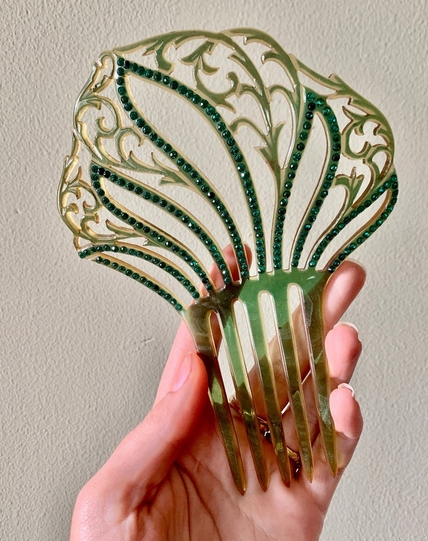 Brooches, dress clips, and pins were the most interesting pieces of jewelry in the 1930s. Their versatility was such that women found endless ways to flaunt them. They were used as a statement piece to highlight an outfit, to decorate a hat to a scarf or a handbag to shoes and sandals.

It was also popular to wear two matching pins on each side of the neckline as a statement. This trend became such a hit among masses that in 1931 Coro patented a device ‘Duette’ which allowed two clips to be worn as a single brooch. Later, many other designers came up with their versions.

In making these accessories, the use of glittering clear rhinestones, fake pearls, and celestial motifs was prominent in the first half of the decade.

One trend which remained strong from the 1920s was the stacks of bangles. The actual fit of bracelets tightened during this era, mostly due to Hollywood as with the advent of sound in movies, studios did not want actresses creating unwanted clanking of their bangles and bracelets. Therefore, they were worn tighter on the wrist. 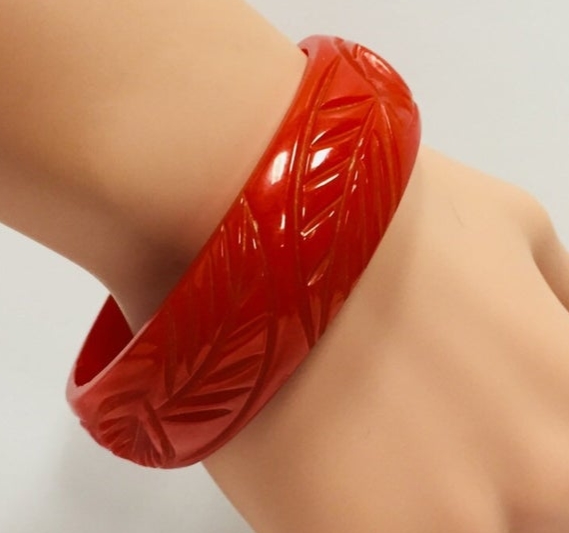 The designs for bracelets and bangles varied, sometimes sparkling with paste set as imitation diamonds, or sometimes as a simple bangle style. Bakelite was widely used due to its cheap cost. It was embellished with rhinestones to make it look flashy or intricate designs were carved on it. Light colors were more prominent in keeping with the Hollywood trend.

The love for long beaded necklace continued in the 30s with long strands of glass beads becoming the favorite. As colored beads became fashionable again, women began to color coordinate these with each outfit they would wear.

As ladies' hair grew longer, the earrings became smaller and closer to the ear. The “Button Earring” as they were called became an instant hit among the masses. Domed and flattened buttons were decorated in a variety of fashions to keep up with the trend.

However, evenings were still reserved for long drop earrings (as they highlighted the neckline) with a clear sparkling rhinestone set into silver tones.

A new design that gained immense popularity was clip-on earrings as many people refrained from ear piercing.

Throughout the Great Depression, costume jewelry helped women achieve lady-like glamour without putting any burden on the pockets. These accessories made the cheaply made outfit look worth a million dollars. Many popular designers Ciner, Trifari, Eisenberg, Coro, and Boucher popularized costume jewelry for riches as well as for the masses.

Despite the challenges of this era, the popularity of costume jewelry continued to blossom. By the end of the decade, 1930s costume jewelry with sparkling glass jewels and imitation precious metals had carved a niche in the fashion industry and became a necessity for every lady’s wardrobe.

Key Jewelry Styles of the 1930s

Where to Shop for 1930s Jewelry

While the information and knowledge about 1930s jewelry trends must have left you impressed, the million-dollar question is where to buy it from in the present era!

In today’s time, the online platform provides the best shopping experience for a variety of reasons, the biggest being comfort and immediate access.

Etsy and eBay are the best shopping sites to buy jewelry of your preference. Providing with the safest and most trusted shopping experience, online shopping has never been easier and hassle-free.

So, shop now and add more to your glamour from the decade of the 1930s!