The Trifari brand is well known for their fine costume jewelry. Their pieces were created with the highest craftsmanship, in order to emulate high end jewelry. In this article, you will learn about Trifari Vintage Costume Jewelry, the history, materials, marks, most collectible pieces, and tips on how to buy.

Gustavo Trifari arrived at Ellis Island in 1904 at the age of 20, from Italy. He came to America with a dream and by the 1910s, he established that dream with the creation of Trifari Jewelry. Jewelry had been in his family for years, with his father being a Napoli goldsmith.

By 1925, Trifari decided to partner with his sales managers, Leo Krussman and Carl Fishel, turning the company into Trifari, Krussman and Fishel. To this day, most of the jewelry is just known as Trifari.

In a great marketing move for the company, during the 1930s, Trifari started working with Broadway and Hollywood producers. Trifari would create custom costume jewelry pieces for famous actors, creating an instant form of advertising for the company.

One of Trifari’s greatest business moves though, was hiring Alfred Philippe as their Chief Designer. Alfred, a French craftsman, was with the company from 1930-1968, though prior to joining Trifari, he worked for Van Cleef & Arpels. With Van Cleef, he developed the use of the invisible setting, and he brought that over to the world of costume jewelry with Trifari. Invisible setting is a way of setting diamonds and gemstones to make it look like there are no prongs or bezels holding the stones in. It is almost as if the setting is invisible, hence the name!

This style had previously been known only in high end jewelry, like Van Cleef, so it was revolutionary to have brought this type of luxury into the costume jewelry world. The ability for Trifari to emulate high jewelry allowed them to broaden their clientele scope. Alfred not only brought this technique to Trifari, but also his fine level of craftsmanship. This impeccable work skill can be seen throughout all of Trifari’s pieces.

With this increased level of skill at Trifari, they started to gain well known celebrity clientele. One of their most famous clients was First Lady Mamie Eisenhower. During her time as First Lady, Mamie was ranked as one of the best-dressed women in the country by New York Dress Institute. She like to mix both high end and lower end items, which is where her love of costume jewelry, particularly Trifari, came in.

For the inaugural ball in 1953, Mamie had Alfred design a set of pearl jewelry for her. The set included a pearl choker necklace with a matching three stranded bracelet and earrings. There was a set made for her, the Smithsonian and Trifari archives. These pieces complimented her pink gown which was embroidered with rhinestones. She loved this set so much that she had Trifari design another for the inaugural ball in 1957.

Trifari continued to produce high quality pieces, well into the 1990s. In 1994 it became part of the Monet Group, and was then acquired by Liz Claiborne in 2000.

Watch the Following Video to see Examples of Trifari Jewelry

During World War II, there were major metal rationing, which affected all businesses, including jewelry. Many jewelers, including Trifari, switched to Sterling Silver during this time. After the war, they wanted to go back to their previous metals, but customers were used to and like the silver. In order to accommodate their clientele, but while also staying fresh, Trifari started advertising a ‘new’ metal called Trifanium. Trifanium is a basic metal alloy which could be polished to a shiny finish, but wouldn’t tarnish like silver. You’ll see this metal in many of their pieces.

Similar to other costume jewelers of the time, Trifari used paste and imitation gemstones. We often see imitation moonstone, chalcedony and pearls. Rhinestones and enamel were also often used.

Trifari created many designs, but there are a few that stand out as some of the most prized. First we have the famous Trifari Crown Brooches. These pieces were one of Alfred’s designs which he made from the 1930s to 1950s. Designed in a crown motif, these pieces are very colorful and bright! Often you will see two large cabochons of imitation gemstones, with glittering rhinestones throughout. There was often a base of baguette cut imitation gemstones as well.

In order to celebrate Queen Elizabeth II taking the throne they created a Coronation Gem Series, which included a crown as well. These pieces became so popular and synonymous with the brand, that Trifari decided to incorporate a crown motif into their hallmark. 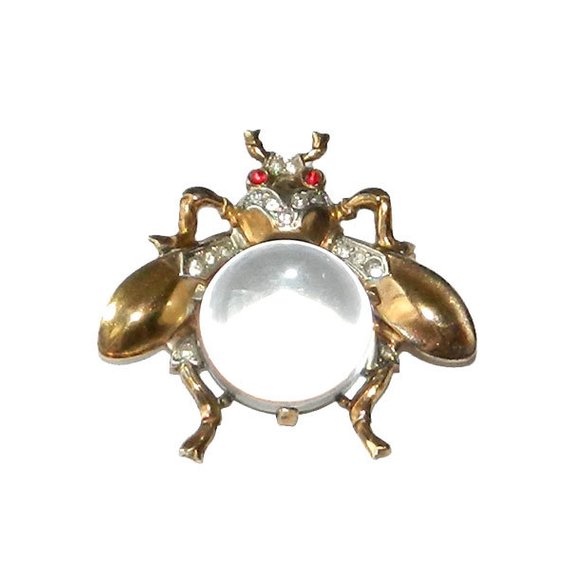 Another popular item was their Jelly Belly Brooches. During the 1940s, these brooches depicted animals such as seals, poodles and roosters. Poodles are the most rare and collectible. The belly consisted of a piece of lucite, often carved into a cabochon shape. Lucite is just a clear type of plastic.

During the 1940s, Trifari created many patriotic pins. These depicted American flags as well as red, white and blue eagles.

Many Trifari pieces had the look of diamonds, though they weren’t actually diamonds. These pieces were coined ‘Diamante’ items and were very popular.

Trifari was quite revolutionary in jewelry design. The company created Clip-Mates, where a large brooch could be separated into two dress clips. The wearer had the option of wearing it as one large piece or two smaller items.

Trifari came out with Limited Edition series' during the 1990's. These are the last of the signed Trifari pieces and are highly collectible.

As with many costume jewelers, Trifari went through a few different maker marks, but they were very diligent about stamping their jewelry. They would produce advertisements that stated, “If it isn’t signed, it isn’t Trifari.” We suggest being cautious when purchasing something not signed, but advertised as Trifari.

These marks can help you to identify the age of your piece. During the 1920s through 1940s, you will often see the stamp ‘KTF’, with a larger ‘T’. This represents the three owners, Leo Krussman and Carl Fishel, along with Trifari himself.

Trifari Signed all of their Pieces 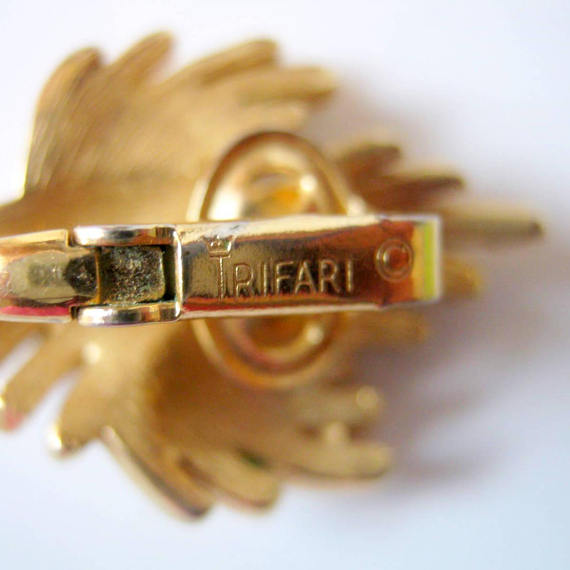 Trifari Earrings from InspireInMotion on Etsy

There are some other marks we see often, such as ‘Trifari’ in script in an oval. Some Trifari necklaces have been embellished with a metal tag with a crown over a ‘T’. No matter the mark, it is just important that you see one. 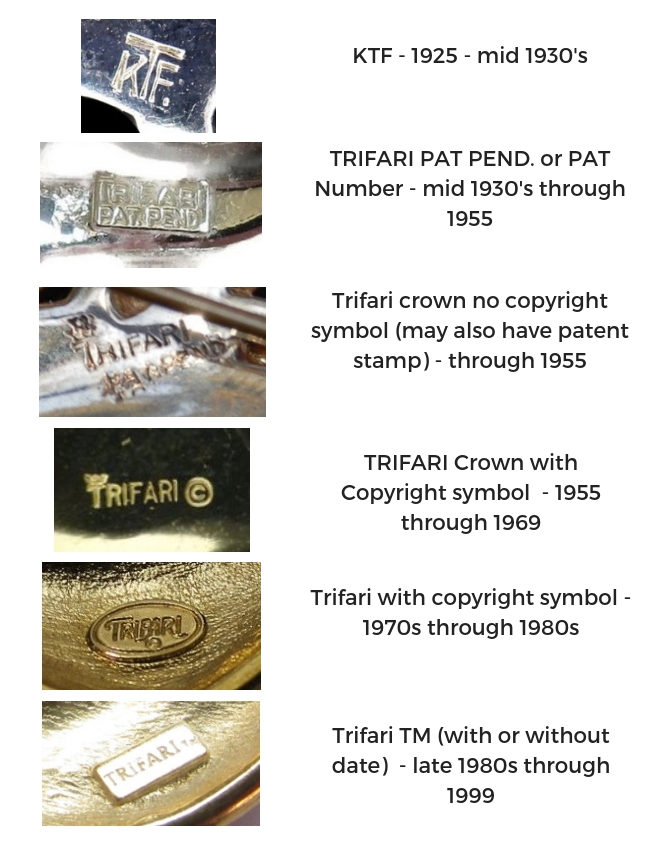 Trifari can be purchased at many antique and estate shops and sales, but there is also an abundance of items to be found online.

I enjoy purchasing my vintage jewelry from Etsy or eBay.

Some tips for shopping for vintage jewelry online:

We’ve seen a few Etsy Stores that carry an abundance of Trifari items:

Adding a piece of Trifari jewelry to your costume jewelry collection would be a great purchase. These pieces are crafted with excellent care and talent, as well as with high end looking designs. You’ll always cherish your Trifari jewelry!

Please leave any questions you may have in the comments below, I always answer!