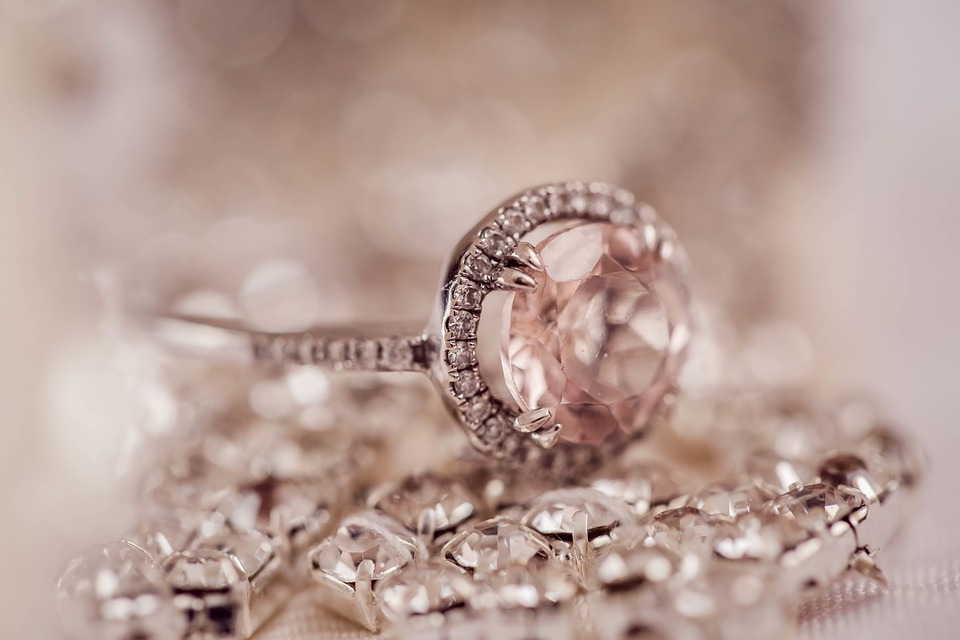 What Does "Cut" Mean?

The term "Cut" refers to the symmetry, proportion, and polish of a diamond. It does not relate to its shape. A diamonds cut will affect its brilliance, and a poorly cut diamond will have less luminance. 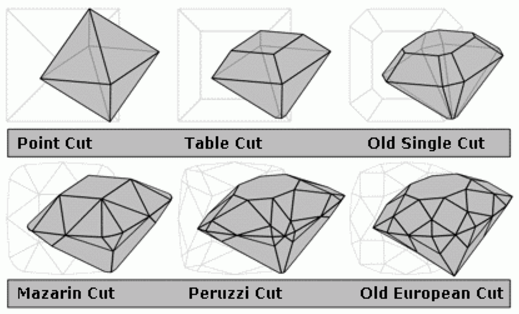 To understand diamond cuts, you must have some knowledge of the parts of a cut diamond.

Diamonds have a distinct three-part structure. The diamonds midsection is called the girdle, the top is known as the crown, and the bottom is called the pavilion. The flat part on top is referred to as the table and is often the gems largest facet. The tiny facet capping the diamond's pavilion is called the culet.

What is the Difference Between Vintage and Antique?

Before the invention of modern day cutting machines, diamonds were cut by hand. The diamond cutter wanted to get the most out of a stone, so maintaining a high carat weight was top priority. As cutting techniques evolved, diamond cutters could better manipulate brilliance and sparkle, inventing new cuts to maximize light.

Antique cut diamonds were cut to sparkle under candlelight, and offer a soft, romantic glow.

There are several different vintage and antique diamond cuts; these include:

The point cut dates back to the mid 14th century; this cut is a simple polishing of the octahedral crystal faces to create even and unblemished facets. It was the first diamond cut ever created. By the mid 15th century, the point cut was improved upon by having one-half of the octahedron sawn off, creating a table cut.

Diamonds cut this way appear black to the eye. They do not reveal the "fire" that diamonds are known for today. During this era, colored gemstones such as ruby and sapphire were much more popular.

The table cut is the second diamond cutting technique developed in which took the point cut and sawed off the top of it to create a smooth, flat surface.

Similar to its predecessors - rough and point cut diamonds, table cut diamonds appear black to the eye. But, by adding a culet to the opposite end, diamond cutters were able to entice a smidgen of light back to the eye, releasing a bit of fire from within the stone.

Table Cuts are the ancestor of the Emerald Cut and the Square Cut.

Enthralled with the manipulation of light, diamond cutters began experimenting with ways to increase it. They took the pavilion and faceted it a 45-degree angles, achieving more brilliance. They also maximized light but cutting the crown at 45-degrees.

Full Table Cut diamonds were rectangular or square in shape and grew in popularity throughout the Renaissance Period.  Only a few survive to this day, as they had excellent proportions to be recut into modern Brilliant Cuts.

One of the earliest diamond cuts to come from Europe after the table cut.

Invented in 1458 but Flemish diamond polisher, Lodewyk van Bercken. He also invented the scaif polishing wheel which enabled him to cut facets with more precision and paved the way for more complex diamond cuts.

A Carré cut diamond is a rare step-cut diamond with very long and open facets that display the clarity and color of a diamond. They were invented to minimize waste during cutting and use the most of a rough stone.

Carré cuts are square in shape, with straight facets rather than the triangular facets used in Round, Marquise, Pear, Heart, and other diamonds. Carre cuts and Asscher cuts are very similar. However, a Carre cut diamond has four sharp corners, while the Asscher cut diamond has eight corners.

The rose cut came about in the middle of the 16th century and was common during the Georgian and Victorian eras.

Rose cut diamonds are named for their shape, which resembles a rose bud in bloom. The cut consists of triangular facets (from 3 to 24) arranged in a symmetrical radiating pattern with no table facet. The bottom of the stone is left flat - that is, it lacks a pavilion.

A rose cut diamond will have a circular shape. It used to be that you could only find rose cut diamonds in antique pieces, but modern jewelers are now making them, due to a rise in popularity.

The briolette cut is believed to be derived from the rose cut. It is a 3D teardrop shape composed of 48 to 88 triangular facets that cover the entire surface of the diamond. Because of their symmetry and how much they maximize light reflection, the briolette cut looks stunning as a pendant or hanging from a pair of earrings.

After Napoleon gifted his second wife a necklace containing briolette diamonds in 1811, this cut became highly fashionable and sought after by European royalty for the rest of the 19th century. Today, fancy colored briolette diamonds are becoming increasingly popular.

The single cut dates back to the 1300's and is also known as the eight cut, they traditionally have eight crown facets and eight pavilion facets, with an octagonal shape. Modern single cuts have been modified to have a rounder shape with more facets.

A single cut diamond has a large table and the culet may be pointed or flat.

The Mazarin cut was invented in the mid-1600s by the French Cardinal, Jules Mazarin. The Mazarin cut has 17 crown facets and 17 pavilion facets. With the increased number of facets, diamonds were beginning to sparkle more than ever before and moving closer to today's brilliant cut.

The Peruzzi cut came about in the 1700s, as an improved Mazarin cut. With 32 facets on the crown and 25 on the pavilion, these 57 facets could now bounce light around the diamond and back to the eye, displaying brilliance like never before. The Peruzzi cut is cushion shaped and has a distinguishable X pattern visible from the table.

The Peruzzi cut was the inspiration for the Old Mine cut.

A popular cut in the 1700's, the French cut is used in both diamond and sapphire jewelry. The name French cut comes from the fact that they were in higher demand in France than anywhere else.

In the French cut, the crown appears square when viewed from above. It has nine crown facets, with the square (or rhombus-shaped) table facet diagonal to the square of the crown. The four sides of the table are joined by four triangular facets that point towards the corners of the crown. This gives the appearance of a four-pointed star.

The crown of these diamonds is usually high, and the table is small. The French cut was a favorite during the Art Deco period.

During the mid 18th century, King Louis XV of France commissioned his court jeweler to create a diamond cut for his mistress Marquise de Pompadour. The cut became the marquise cut, and was also known as the navette cut.

The Marquise cut is a modified round brilliant cut that is elliptical in shape with pointed ends. Older marquise cuts usually have an open culet, whereas in the 1930s they start to transition to a closed culet.

The Old Mine cut was invented in the mid-1800's through the 1900's. It is the predecessor to the Old European cut and the brilliant cut. It was popular in the Georgian and Victorian eras.

From the top, an old mine cut diamond looks like a gently rounded square; it is a deep cut with a high crown, small table, and flat culet.

Old mine cuts are often confused with modern cushion cut diamonds. Technically, the old mine cut is a type of cushion cut because it has a rectangular shape and rounded corners. However, the cushion cut has had years of refinement, giving it more distinct qualities.

Old mine cuts have smaller tables, open culets rather than no culet, higher crowns, and deeper pavilions than cushion cuts. Old Mine cuts have 58 facets.

The old European cut was developed in the 19th century. It is the forerunner of the modern day brilliant cut and is considered the most advanced cutting technique of the 19th century. it was widely used in the Victorian, Edwardian, and Art Nouveau eras.

Old European cut diamonds are circular in shape and quite similar to old mine cuts regarding faceting. Like the old mine cut, these diamonds possess a high crown, small table, and large culet. The difference is, the old European cut has a circular girdle, shallower pavilion, and different arrangement of facets. The Old European cut boasts 58 facets for more intense sparkle.

The transition (or American) cut was invented in the 1870s by Henry Morse, a master diamond cutter in America. He was the first person to focus his cutting on diamond beauty over carat size. Traditionally cutters wanted to minimize the amount of rough diamond they removed, however Henry was willing to sacrifice this in order to reveal the diamond’s most flattering form.

During the 1930s and 40s, transitional cut diamonds were most prevalent in jewelry. This cut is a cross between the clunky facets of Old European cut diamonds and the precision cuts of today. They have an old world feel but with a modern shape and higher color grades. Rather than being cut to sparkle under candlelight, their focus is on symmetry and uniformity.

The Antique cushion cut evolved over the centuries with subtle changes, such as the shrinking of its culet and the widening of its table. Different to the old mine cut, there doesn’t appear to be a hole in the middle of this cut, which indicates that the culet has been reduced to increase its ability to shine.

The baguette cut evolved from an antique cut called the hogback, a cut with an elongated table and simplified crown featuring either a ridge or a single row of steps. Dating as far back as the 16th century, hogbacks were most frequently used to make jeweled letters and diamond monograms.

Baguette cut diamonds are miniature table cuts with 14 facets. Because of their small number of facets, these stones have a subdued fire. However, their clarity and luster make them a stunning accent stone.

Cartier and Harry Winston re-popularized baguette cut diamonds in 1912. Through the 1920s and 1930s baguette stones were welcomed by western society as an alternative to traditional round cut stones. The Baguette cut became the leading style in Art Deco jewelry with its clean lines and geometric shape.

Created in 1902 by Joseph Asscher, this cut was the first "signature" diamond cut. They are a modern take on a vintage diamond shape. The Asscher cut is square or rectangular with wide corners. The crown is usually very high with a small table. The culet is large.

An emerald cut has roughly 25 pavilion, 25 crown and 8 girdle, making up 57-58 facets. It is a rectangular step cut design, meaning it has horizontal facets which differ in angles of inclination. The emerald cut is one of the first faceted diamond cuts, after the point and table cut.

The emerald cut was originally invented as a way to cut emeralds and minimize chipping. Diamond cutters took notice and began incorporating the cut into diamonds as well. While the emerald shape doesn't supply maximum brilliance, this diamond cut still has plenty of shine and offers a unique look.

This cut has a dramatic hall of mirrors effect and was standardized in the 1940s. The shape gained popularity during the 1920’s Art Deco movement.

Why Choose a Vintage or Antique Diamond Cut

There are a couple reasons why more people are choosing vintage and antique diamond cuts:

Where to Buy Vintage and Antique Diamonds

I like to shop on Etsy and eBay for pre-owned vintage and antique jewelry.

I hope this article helps you understand the evolution of diamond cuts. Let me know if you have any questions!