The decade of the 1970s was in many ways a continuation of the previous decade. The West witnessed huge political and social changes in this era. Fashion in the 70s was influenced by hippie lifestyle, disco styles, demand for equality, and freedom. It was all about individuality and self-expression which reflected in people’s choice of fashion. With counterculture, people were not into buying high fashion, but high fashion was what they were wearing.

In the 1970s, a wide number of new jewelry styles took inspiration from non-Western cultures and enjoyed huge popularity. Jewelry designs had to be bold enough to stand out against multiple styles of this era: hippie, unisex, disco, punk, ethnic, gypsy, classical, native, sports, and bohemian.  Today’s jewelry has picked up many elements from 70s jewelry such as using natural materials, wearing multiple layers of necklaces, and taking inspiration from other cultures. 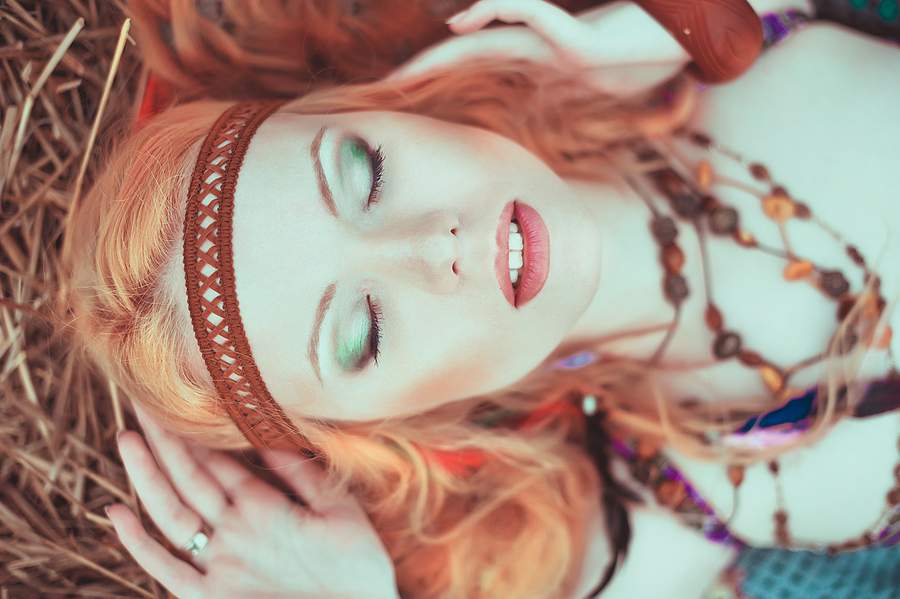 Jewelry Material Popular in the 70s

Loud prints and flowy dresses were in fashion in the 70s, and people wanted big, bold gemstones to pop out against their outfits.

Bold gemstones included turquoise which was widely used, and then there were also malachite and Lapis Lazuli which enjoyed great popularity. Not only these gemstones were bold and bright, but, were less expensive than others making them more desirable.

Gold continued to enjoy its popularity from the 60s, and was all over in the decade of 70s. The warm tone of gold fit perfectly with the autumnal colors, the oranges, and the browns, that dominated the interior designs in this era. Another reason for its popularity was being relatively less expensive and thus quite affordable in the initial years of the decade.

Silver also enjoyed widespread popularity in this decade along with gold.

Puka shells created a revolution in the 70s and their jewelry was highly sought after. As puka shells were naturally pierced, they were strung into necklaces, bracelets, and anklets. Their uneven size and distinct appearance gave a unique vibe to the jewelry. Later, as the demand skyrocketed, any shells were sourced as raw material, and cut and drilled to make ‘puka beads’.  David Cassidy has been largely credited for popularizing them all around the world. Men also wore puka shells jewelry with great enthusiasm.

Other materials like faux pearls and natural materials such as wood, stone, bone, ivory, and even feathers were used to produce the jewelry. 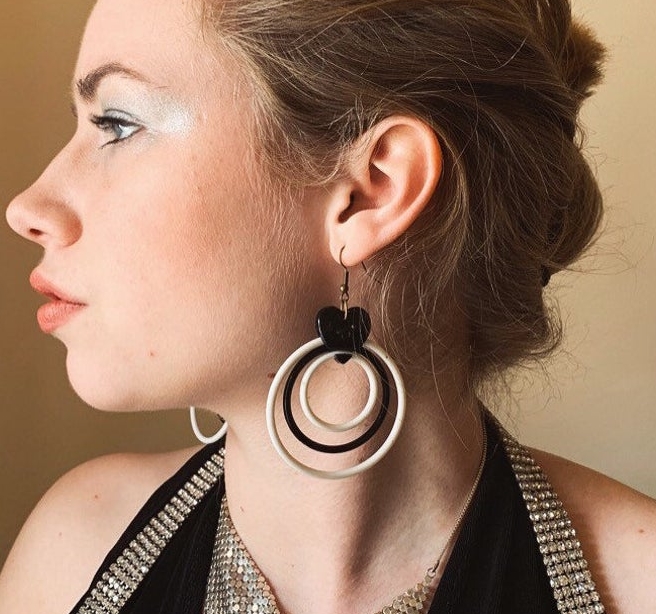 Disco style had a strong influence on the choice of earrings. The theory “the bigger, the better” worked with all earring styles.  Long, dangling earrings which were sparkly, glamorous and dramatic were in trend. They were made from inexpensive material s for affordability and mass appeal.

Dangling earrings in hippie styles and natural designs were also popular. One of the most prominent styles which overshadowed all other styles were large-sized hoop earrings produced in a multitude of vibrant shades and cheap materials. Some hoop earrings were so gigantic that they almost touched the shoulders. 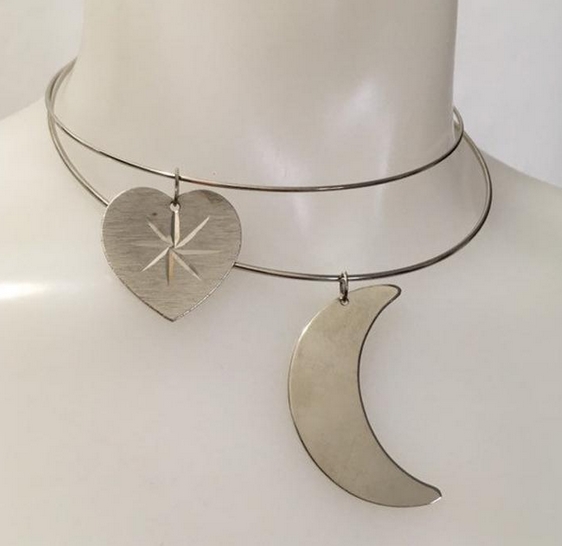 Layering was one of the most popular styles of wearing a necklace. It was common to see women wearing several chain necklaces in layers. Chunky chains, both short and long were cool and in style.

Love beads were one of the most popular unisex hippie accessories. They were usually handmade and consisted of one or multiple long strings of beads that were worn around the neck. Hippie’s fascination with non-western cultures is credited for their evolution. They could also be turned into a bracelet by wrapping onto the wrist. Love beads were passionately preferred by men as well.

Choker necklaces in a variety of styles were another popular style of this era. Faux pearls were a staple fashion accessory. Long strand pearl necklace, multi-layered pearl necklace, and pearl chokers were highly favored.

Bulgari Monete necklace is one of the most iconic jewelry pieces of the 70s. The necklace featured antique coins that were mounted in the center. A famous coin collector, Nicola Bulgari encouraged the production of this collection. The most striking element of this necklace was real and original unaltered coins used in the necklace. Monete necklace enjoys popularity still today with coins featuring from ancient Greece and Rome.

Huge, flashy, eye-catching pendants were high in popularity in the 70s. In 1974, Elsa Peretti along with Tiffany & Co. launched her collection which included the all-time celebrated open heart pendant, the bean pendant, and the perfume bottle pendant. Peretti’s jewelry was bold and made a statement. 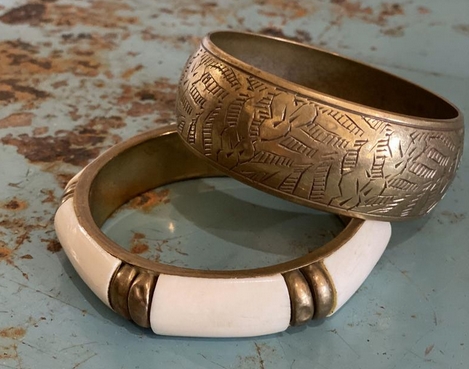 1970s Bone and Brass Bangle Bracelet from AmericanDrifter on Etsy

The bracelets in the decade of 1970s were larger and wider, and available in various shapes and sizes. Large and wide cuff bracelets were worn as a statement piece, with thick bangles been equally popular. They were produced especially in silver and gold plated metals.

ID bracelets became popular in the 70s and had the name of the loved one engraved on the bracelet.  Their popularity soared higher when Americans began wearing them with the engraved name of the soldier missing or being a prisoner of war during the Korean War or Vietnam War. The ID bracelet is still a very popular piece of personalized jewelry.

Friendship bracelets were decorative bracelets to symbolize strong friendship. They were mostly handmade in various patterns and hugely popular among teenagers.

Love bracelets were one of the most important jewelry items in the 70s designed by Cartier. This stylish and chic bracelet represented endless love and devotion. Aldo Cipullo, bracelet designer designed this after getting influenced by the medieval chastity belt.  The bracelet fitted onto the wrist in two parts, secured with a small screwdriver, and was meant to be worn as a timeless tribute to passionate romance. Love bracelets are still popular today and spotted on wrists of many celebrities such as Angelina Jolie, Cameron Diaz, and Lindsay Lohan.

Bone Cuff marked the beginning of a jewelry revolution. Elsa Peretti designed it in the early 70s for Tiffany. With its lean outline, no stones, and embellishments, it was made purely by sculpting metal. It rebelled and broke the norms in the fine jewelry segment with its choice of silver as the metal.  The bone cuff is still popular today not only in the original form but also in many vivid colors. Celebrities such as Angeline Jolie, Sophie Lauren, and most recently, Naomi Watt have been spotted wearing Peretti’s gleaming bone cuff.

Ankle bracelets were a fun accessory to wear in the 70s. With different styles, ankle bracelets could be worn as a silver chain, or as chunky as a charm bracelet. 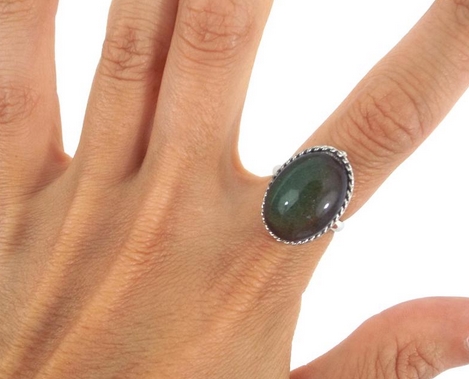 Mood rings were the most distinctive jewelry piece of the 1970s. The popularity of mood rings was over the fact that these could indicate the supposed mood of the wearer by changing color. With their bohemian appeal, mood rings were the trendiest and coolest accessory to the sport.

Puzzle rings were another fun accessory worn in the 70s. The fun part with puzzle rings was putting them together and taking them apart again. These rings ranged from silly costume jewelry to wedding bands.

Cocktail rings as large, flashy statement pieces were in rage in this decade too. Women loved to show off these rings in both in formal and informal settings.

Brooches remained to be an integral wardrobe accessory in the 70s. They were large and had a very striking characteristic such as distorted appearance. They could be made with pearls or glittering stones. Since they were relatively expensive, many people felt contented with owning one or two pieces. And with the anti-fashion trend, people found unusual places to cling them such as on tips of pants, shirts, coats, and even shoes.

With a plethora of shopping websites on the internet, it is an arduous task to choose the best, safest, and most trusted ones to shop for your dream jewelry.

We recommend buying jewelry from Etsy and eBay, two best websites providing you the easiest, safest, and most-trusted shopping experience. With their countless vintage collection of 70s jewelry and essential filters, you will find that perfect piece of your choice.

Shop now to add 70s vintage glamour to your collection!