If you are looking to add some Weiss Vintage Costume Jewelry to your collection, you have come to the right place. Here you will learn about the history, jewelry marks, materials used, most collectible pieces, and tips on how to buy.

Albert Weiss produced bold, vibrant, high-quality costume jewelry from 1942 to 1971. Compared to other companies of that time, Albert’s business was small and was open only for a brief period of time. However, he and his jewelry had a sterling reputation, nationally and internationally. Since there were considerably fewer pieces made, it is difficult to find these treasures today. But it is worth the hunt—his jewelry is magnificent and as “trendy” today as it was in the past. 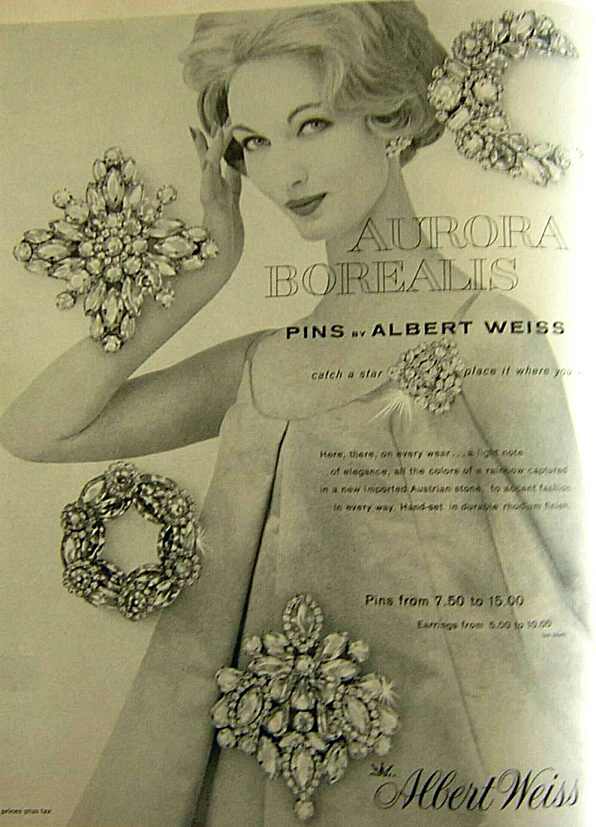 Albert Weiss was born in New York City. He grew up poor and so was determined to make good, for himself and his family. He went to college to study accounting, but had to quit—it was the 1930s and he needed to get a full-time job. His very first interview was with Coro Jewelry. He got the job and discovered a talent for jewelry designing. He had an unerring eye for intricate detail, classic designs and appealing color schemes. His business sense also turned out to be a great advantage. Albert went on to become a manager at Marvella Jewelry and then on to being responsible for the whole business at Grad and Schrager Jewelry House. By 1942, he opened his own jewelry company: “Albert Weiss” on Fifth Avenue in New York City.

He followed Coro’s example of having lines in varying price ranges so that ladies of all financial circumstances could enjoy his jewelry. Albert will always be known primarily for his exquisite rhinestone designs. He used the finest of Austrian rhinestones, because their higher lead content out-dazzled any others. He also gained famed for his “black diamonds,” smoky rhinestones that simulated German quartz.

Albert retired in 1969. His son, Michael, tried to keep the business going, but it closed two years later.

We only know of one designer employed by Albert, Charles James, a fashion designer. He didn’t last long. As bold as many of Albert’s pieces were, Charles’s work was too bold.

Albert bought pieces from contract or freelance jewelry designers and from wholesalers, most notably Hollycraft, previously known as Hollywood Jewelry Manufacturing Company, which explains the many different styles that made up the Weiss collections. 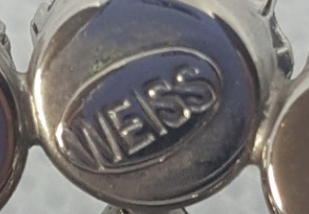 “The greater the effort, the sweeter the reward” perfectly fits collecting Weiss jewelry. It is not as readily available as many other vintage designers, you will search longer, but the thrill when you succeed in your “treasure hunt” is unsurpassed. Make your path to your Weiss treasure smoother by working with only reputable, proven dealers and avoid the angst of trying to decide if an item is real or fake.

For beautiful examples of vintage Weiss, see the Weiss pages on Etsy.