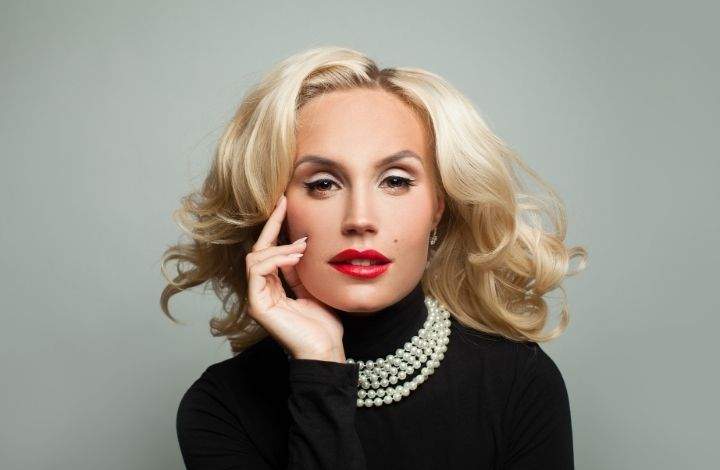 Kenneth believed that “elegance, luxury, and good taste never go out of style.” His costume jewelry embodied his belief and was worn proudly by women of all social strata. If you are looking to add some vintage Kenneth Jay Lane jewelry to your collection, you have come to the right place. Here you will learn the history, materials, marks, and most collectible pieces.

Kenneth Jay Lane was born in 1932 in Detroit, Michigan, the son of an automotive parts supplier. He graduated from Detroit Central High School, went on to study architecture at the University of Michigan, but soon transferred to the Rhode Island School of Design and graduated in 1954. And then he set out to conquer New York City. He worked in Vogue magazine’s art department, but didn’t last long. He designed jewelry for Hattie Carnegie, then moved on to designing shoes for Christian Dior, Bill Blass, Norman Norell and Arnold Scaasi. Kenneth designed bejeweled shoes for Scaasi for a particular show and suggested creating earrings and bracelets that matched the shoes. They were only plastic bangles covered with rhinestones, but they were a smash hit. Kenneth was soon selling his jewelry to major department stores and gained a following that included Jackie Kennedy, Elizabeth Taylor and Audrey Hepburn. He launched his own business in 1963 as “K.J.L.,” which he changed to “KJL” in the mid-1970s.

His jewelry reflected his encyclopedic knowledge of art with the Asian, African and Middle Eastern influences evident in the arm cuffs, large necklaces and hanging earrings and the designs that incorporated Buddhas, dragons and Indian goddesses. Other popular pieces were neck collars, bib necklaces, animal cuff bracelets, opera length (and longer) strands of faux pearls. He traveled to the museums of the world to be inspired by the work of celebrated designers and by the jewelry of European and Indian royalty. Closer to home, his “big cat” pieces were inspired by Cartier. He was even inspired by his former work on shoes: He covered bracelets with the skins of cobra, alligator and lizard.

Kenneth was especially adept at copying high-end jewelry. His clients would have him copy their costly pieces so that they could wear the copies without fear of losing them (or being robbed of them). It was quite the status symbol to be seen wearing a copy by Kenneth. Perhaps the most famous copy was one Kenneth did for Jackie Kennedy Onassis—a Van Cleef & Arpels “Maharani” necklace given to her by Aristotle Onassis. He gave it to Jackie free of charge for the right to sell copies. One of the copies showed up on the 1980s television show, Dynasty. 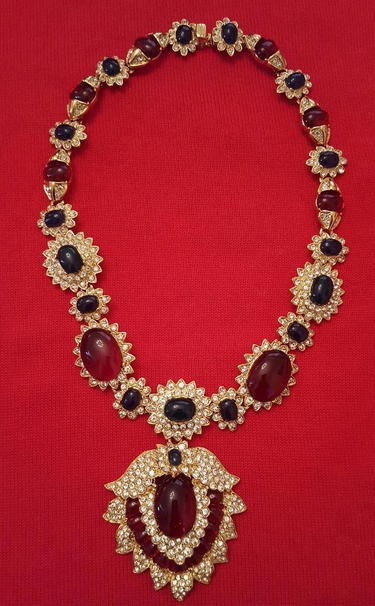 As much as he was adored by the rich and famous (which he reciprocated), they were never his primary focus. From the beginning, he sought to provide beautiful, exciting jewelry for the average, everyday woman. In the 1980s, he designed a line for Avon, and in the 1990s, he made a fortune selling his jewelry on QVC.

Kenneth died in 2017. He turned the direction and ownership of his company over to his executive vice president, Chris Sheppard, who had been with the company for 20-some years and remains as president today.

Kenneth’s earliest pieces were unsigned, but that did not last for long. Since then, the hallmarks have gone back and forth—with periods or without, with a copyright © or without.

The necklace with its matching earrings appears on Page 21 of “Identifying Avon Jewelry” by Sandra Sturdivant.

Kenneth Jay Lane is one of the newer designers to be included in vintage jewelry. That does not mean that those pieces are not worth collecting. For instance, in 1996, a Kenneth Jay Lane pearl necklace sold at auction for $211,000.

There is an utterly fabulous collection of his pieces on Etsy and a quite extensive collection on eBay.