Theodor Fahrner costume jewelry was among the most popular in the first half of the 20th century. Much of his success was due to his determination to raise the quality of machine-made (or partially machine-made) jewelry to be objets d'art. If you are looking to add a piece of history to your jewelry collection, you have come to the right place. Learning about vintage Theodor Fahrner jewelry is sure to give you some inspiration for your next purchase!

Theodor Fahrner was born in 1859 in Pforzheim, Germany. His father, Theodor, Sr., manufactured and sold rings that memorialized historical events. Young Theodor trained as a metal engraver at the Pforzheim Art Academy where he honed his natural artistic talent and developed a lifelong love of art.

When his father died in 1883, Theodor took control of the company and expanded its production beyond rings to necklaces, bracelets, brooches and earrings. He also pioneered designer jewelry and the use of well-known and respected artists of various disciplines to design jewelry made partly or entirely by machine. Each artist had a distinctive style, and the little ring factory became  was one of the most prosperous jewelry houses in Europe and remained so until the 1950s. Theodor Fahrner jewelry gained international attention when designer Max J. Gradl received a silver medal at the 1900 Paris World Exhibition. Soon Theodor was exporting large quantities of his jewelry around the world, most notably to London and New York City. 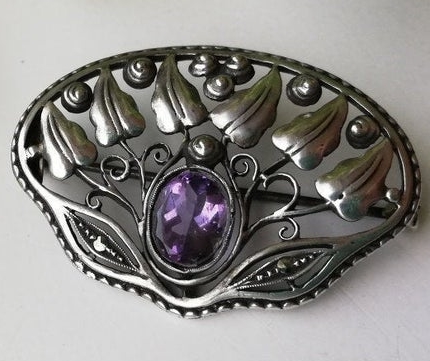 Theodor was known for Art Nouveau and Jugendstil (a German style influenced by English Art Nouveau, Japanese prints and Viennese abstracts) designs. Even though his pieces often contained semi-precious stones, he believed that the true worth of any piece lay in its artistic merits. He insisted on mass producing affordable yet exquisite jewelry that people of various economic statuses could enjoy.

In 1919, Theodor died and the firm was purchased by Gustav Braendle. The firm’s name became Gustav Braendle - Theodor Fahrner Nachfolger (German for “successor”).

From the 1920s to World War II, the Art Deco designs reigned. They represented the Jazz Age as they became more geometric. The combination of black enamel, green agate, coral and onyx used by Theodor became signature colors for the Art Deco Era.

In the 1930s, filigree jewelry was introduced, but first German politics, then the war adversely affected production. In the 1940s, the factory was destroyed by a bomb.  After the war, production resumed with a large variety of designs, but the company never regained its pre-war prominence.

In 1952, Gustav Braendle died and his son Herbert took charge of the company with a greatly reduced workforce.

In the 1960s and 1970s, while the company continued producing their traditional styles, many designs were modernized and the jewelry made with stones, both precious and semi. Gold joined silver as the “go-to” metal and both were used to re-create Roman and Egyptian motifs.

In 1979, Herbert died, and Gustav Braendle - Theodor Fahrner Nachfolger was liquidated and most of its records destroyed. However, the jewelry remains in demand today and is sold at high prices. 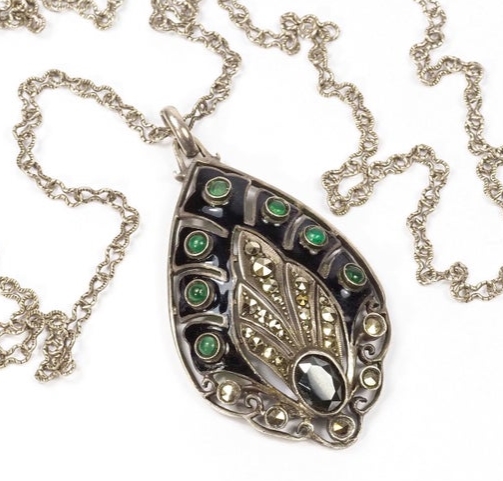 Theodor believed that “all art is one” and hired artists from all disciplines, including: 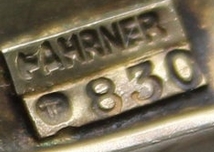 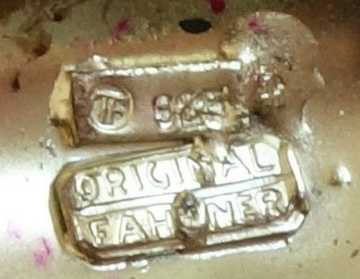 Theodor Fahrner filigree jewelry was introduced in the 1930s. This ring is a superb example of the filigree style as well as Art Deco design. Its intricate and elegant design is fashioned from gilded sterling silver. The three faceted aquamarine stones (likely synthetic) are a stunning color.

This brooch from the late 19th century is a rare example of Theodor Fahrner's Art Nouveau designs.  The green onyx stone is set into sterling silver with embossed lilies and leaves.

An Art Deco filigree bracelet from the 1930s made from gilt silver with flower-like links centered with golden citrine-colored stones, likely synthetic.

This pendant from the 1920s is sterling silver with a gold wash finish. Detailed roses make a lovely oval frame for the marquise-cut amethyst. Amethyst is slight less than 1 inch by ½ inch (11mm by 23mm).

A fabulous example of Theodor Fahrner’s silversmithing from the early 20th century: the geometric design with a center chrysoprase gemstone set among marcasite, mother-of-pearl and black enamel.

For devoted collectors, there is a stunning book, Theodor Fahrner Jewelry Between Avant-Garde and Tradition: Art Nouveau, Art Deco, the 1950s that is a crash course in his designs. It is an invaluable resource for recognizing and assessing Theodor Fahrner jewelry.

See the Theodor Fahrner pages on Etsy for a variety of his jewelry from different eras and in different styles.

Click here to see a fine selection of pieces for sale on eBay.