Swarovski produces the highest quality crystals, and the most in demand, in the world due to their secret chemical formula and the absolute precision of Daniel’s revolutionary cutting machine.

If you are looking to learn more about vintage Daniel Swarovski jewelry and maybe add some to your collection, read on to learn what you need to know about the history, materials, designers, and most collectible pieces.

Daniel Swarovski was born in 1862 in Bohemia (now part of the Czech Republic). Not only was Bohemia the world center for glass production, but his father owned a small glass-cutting factory. Daniel learned from his father, was naturally talented and became known for his skill in the art of glass cutting.

In 1883, at twenty-one years of age, Daniel partnered with Franz Weis, and they opened their own jewelry company. In only three years, the company had grown to include 70 employees, and Queen Victoria was a client. Not long after, Daniel married his partner’s sister, Marie, and they eventually had three sons, Wilhelm, Fritz and Alfred, who would follow their father into the business in due time.

Daniel’s favorite thing was to experiment, with different techniques and different equipment. Glass cutting was done manually until Daniel revolutionized the industry with his glass-cutting machine in 1891. The machine was able to create a high refraction index in crystals and as many as 100 facets that would mirror light and bend it in various directions. He moved his business to Austria to begin producing crystals.

During World War I, production ceased. There was a dire shortage of grinding tools needed to produce crystals. Daniel spent the down time on R&D and devised a way to manufacture their own abrasives.

Was there ever an era that so perfectly called for crystals like the Roaring Twenties did? I don’t think so. Glitter and glamour all around, from the flappers’ bobbed hairdos decorated with crystal-embellished headbands to the tips of their sparkly T-strap shoes.

The Swarovski company was not immune to the financial woes of the Great Depression nor to the constraints imposed by World War II. But after the war, the crystal business exploded. Crystals were de rigueur on designers’ fashions. They inspired the likes of Coco Chanel and Christian Dior and lit up the silver screen, maybe nowhere quite as radiantly as in Gentlemen Prefer Blonds with Marilyn Monroe, and on the red carpets. Even before that: Did you know that Dorothy’s ruby slippers in The Wizard of Oz were made of Swarovski crystals?

Daniel never stopped researching ways to make his crystals more brilliant. In 1956, in collaboration with Christian Dior, he tried vaporizing crystals with a metal coating, and his “aha!” result was the Aurora Borealis finish that dazzles with every color of the rainbow. That was his last burst of crystal ingenuity. He died that year at the age of 93. Daniel expected (and so did everyone else) that his sons, who joined the business in the 1920s, would take over the reins. They did but not for long. In a sad twist of fate, all three died between 1960 and 1962. Daniel’s grandsons, Daniel II and Manfred, were next to own/operate the company.

Daniel, from the very beginning, cared about the well being of his employees. The “Swarovski Spirit” that he initiated included ensuring that his employees had rich, full lives outside of work and being a responsible part of the community by supporting sports, recreational activities, and social endeavors. The Swarovski Foundation, a non-profit organization, continues that spirit while also championing programs that provide education and healthcare for underserved children and women and being a leader in the efforts to project our planet. 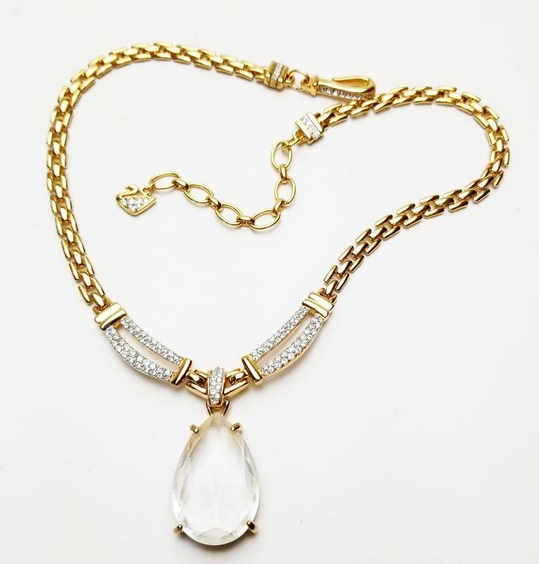 According to the company, all Swarovski jewelry and crystal products have hallmarks. 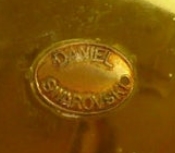 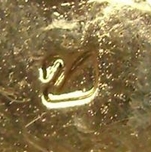 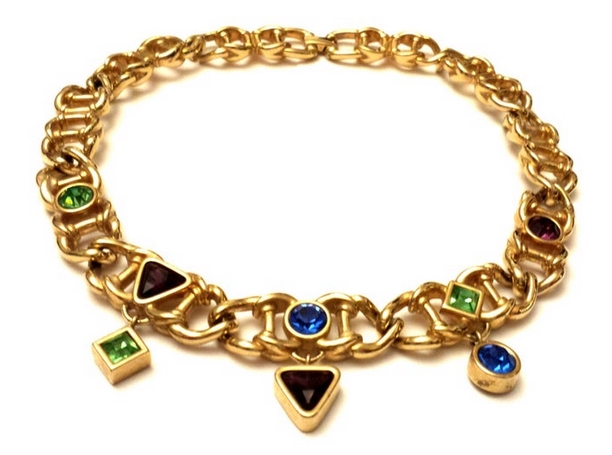 Strung on thin monofillament are iridescent beads that are black on one side and a blue/black “oil slick” finish on the other and radiate several colors when worn. Necklace is 18” long with a 3” extension. Swarovski stopped production of pagoda beads in the 1950s, so this necklace is quite a find.

If you ever have the opportunity, there is a Swarovski museum, Swarovski Crystal Worlds (Swarovski Kristallwelten) near Innsbruck, Austria. It is unlike any museum that you have ever seen. There are dozens of rooms, each in a different theme of crystals; a “Crystal Cloud” of more than 800,000 crystals; outdoor attractions; and a playground for children—to name only a few of the wonders you will see.

For now, you can “ooh” and “aah” over the fabulous crystal creations that appear on Etsy and eBay and hopefully get your hands on some vintage Daniel Swarovski jewelry.