Wanting to learn about Elsa Peretti for Tiffany? Learn about the timeless and distinctive style of one of the most famous jewelry designers of all time.

Elsa Peretti (1940-2021) was one of the most successful jewelry designers ever. Taking inspiration from nature and objects from everyday life, her designs had a distinctive, sculptural quality. When describing her work she said, “The idea is to make beautiful things that people will really care about.”

The popularity of Elsa Peretti’s designs are as wearable today as when Tiffany & Co., first launched her line in the 1970s. “There is no new design, because good lines and shapes are timeless,” Peretti explained.

Peretti was born to a wealthy family in Florence, Italy. Educated in both Rome and Switzerland, her initial career goal was interior design. She began modelling in Barcelona, Spain, in the 1960s. By 1969, she signed with the Wilhelmina agency, in New York.

American designer Giorgio di Sant’Angelo, agreed that Peretti, and some of the other models could wear her jewelry designs on the runway. Featured in the show was the first piece of jewelry she ever created. This was a small, two-inch, silver bud vase pendant on a necklace, in which a real flower could be placed. The audience loved it.

Soon afterwards, Peretti befriended Halston, the millinery designer, who turned to crafting collections of women’s clothing, when hats fell out of favor.

As a featured model in Halston’s showroom and fashion show, she modeled not only clothing, but her elegant jewelry creations. Diamonds by the Yard pieces were featured on the runway, long before appearing in jewelry showcases. Her association with Halston, and the buzz her designs created, led to a highly lucrative deal with Tiffany & Co., in New York, in 1974.

Joining Tiffany in 1974, it was purported that Peretti’s jewelry designs alone represented 10 percent of the company’s overall net sales between 2009-2011. This led to a one-time payout of 50 million dollars to the designer, in 2012.

Tiffany opened its first store in New York, in 1837. Charles Lewis Tiffany and John B. Young, set up shop together, selling a fine selection of stationary and fancy goods. The business located in lower Manhattan was then called Tiffany, Young and Ellis. In 1853, Charles Lewis Tiffany took full control and changed the focus to jewelry.  The name was shortened to Tiffany & Co.

In 1848, Tiffany became known for its incredible collection of quality diamonds. Charles Lewis Tiffany purchased brilliant cut, precious stones from European aristocrats and added them to exclusive jewelry creations. Shortly after, the 28.55 carat fancy yellow Tiffany Diamond, was purchased, as a showpiece for the flagship store.  In 1886, Tiffany designed the 6-prong solitaire diamond ring, allowing the full brilliance of the diamond to shine. This became the standard for high quality engagement rings.

Tiffany & Co., were also specialists in metals. In 1851, the company developed the standard in silver jewelry with the .925 stamp. In 1886, they started crafting fine jewelry in gold.  The retailer also introduced new gemstones they found to the public. This included tanzanite, and morganite, a type of pink beryl.

Made for the Everyday Woman

Fashion was changing in the 1960s and 1970s. Styles became more relaxed. Peretti wanted to design pieces that women could wear every day, for a life of casual comfort.

Peretti broke from the tradition that fine jewelry had to be made from gold. Beginning in the 1930s, Tiffany and Co., eliminated silver jewelry from its showcases. With the reintroduction of silver, starting with Peretti’s Bone Cuff, the retailer attracted a new customer: women buying jewelry for themselves. The designer made wearing silver glamorous.

While Elsa Peretti’s jewelry designs have always been coveted, two are known as her iconic signature pieces: Diamonds by the Yard, and the Bone Cuff.

Diamonds by the Yard 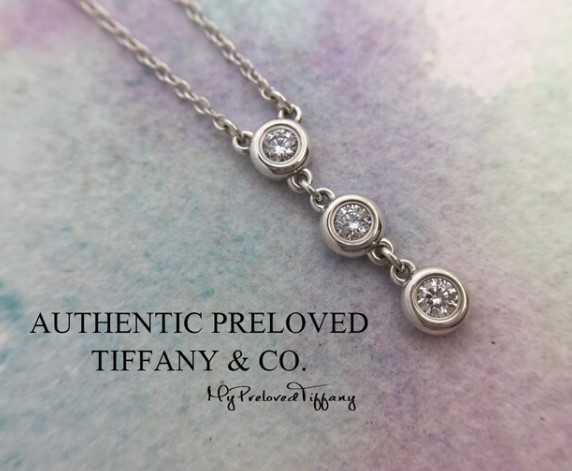 Elsa Peretti Diamonds by the Yard Necklace from Etsy

Peretti created Diamonds by the Yard, with bezel set, round diamonds on a delicate chain. The collection ranges from one elegant diamond pendent centered on a chain, to multiple floating diamonds suspended along the length. The number of diamonds, the type of precious metal used, and the length of the chain are all determining factors in the price point. It is popular to layer the necklaces of various lengths.

Some of the Diamonds by the Yard pendants feature a more traditional claw setting. Others are in a tear shaped, elongated bezel.

The Diamonds by the Yard collection also features bracelets to create matching sets. For earrings look for round bezel set stud earrings, and longer drop style earrings. As for rings, you’ll find singular diamonds on a tiny chain band. Floating bezel set diamonds, clasped between a top and bottom ring of precious metal, expose the skin on the finger for a stunning effect.

Eventually, the gems in Diamonds by the Yard were adapted to include colored stones for a collection called Color by the Yard. Precious gemstones available include blue sapphires, or the more exotic pink, as well as emeralds. Other stones include aquamarine, turquoise and even jade.

Pearls by the Yard, another variation still, are designed with cultured freshwater pearls.

Elsa Peretti also re-envisioned Diamond by the Yard with Diamonds by the Yard Continuous Necklaces. In these works, diamonds are set much more closely together, with only a clasp of precious metal in between.

The Bone Cuff, designed by Peretti over 50 years ago, is a thick bracelet, crafted to fit the bones of a woman’s left or right wrist.  Originally crafted in silver in the early 1970s, it was made without stones, and relied on its strong sculptural silhouette for its style.

The Split Cuff is a later, lighter version, with the center cut out.

When Elsa Peretti turned 80, Tiffany and Co., launched a special edition series of the Bone Cuff. With a copper base the collector’s item are washed in shining red, green and blue.

In her Wave collection the designer was inspired by the movement of the sea. The classic rings twist upward toward the knuckle in five thin rows of precious metal. Rings incorporating a single diamond solitaire are available in one wave, three or five. Bracelets follow the same undulating wave format, in bangles stacking three, five or nine rows. Wave necklaces are available with or without a scatter of diamonds. 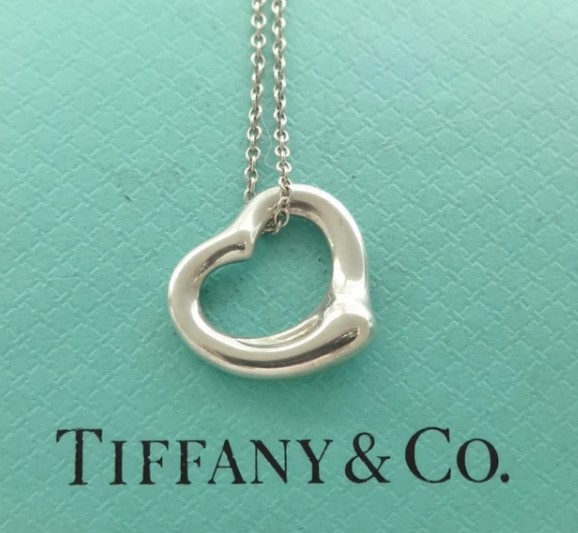 Hearts are popular motifs in Elsa Peretti jewelry. There are open hearts, full hearts, and knotted hearts throughout the collection. Each are stylized forms that modernize each design. Hearts appear as finishing touches, like in the Open-Heart Pearl Bracelet that uses the motif as a toggle closure.

The designer felt that the simple bean represented the origin of all things. It was a symbol of life. Beans are woven throughout the collection, as pendants on chain necklaces or wires. One design features a bean, capture in a handwoven silk net with a tassel, both crafted by Japanese artisans.

Some necklace and rings feature a multitude of bean images, side by side, creating one continuous row 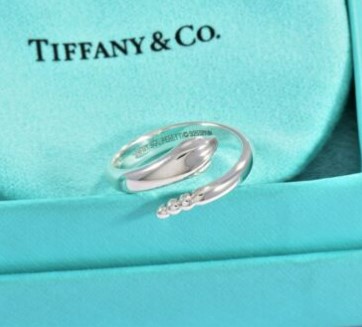 Peretti was captivated by the natural world. The scorpions found around her home in Spain were ideas incorporated into her works. Serpentine images are popular forms. There are even mystical creatures like dragons. These were not exact replicas, but functioned more as starting points for modern sculptural representation. 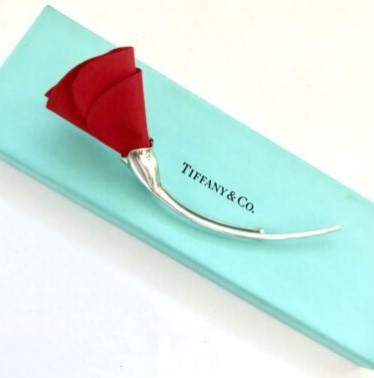 You will also find a variety of floral motifs such as Amapola, the Spanish word for poppy, crafted in precious metal. The Open Bottle Pendant, or Open Jug Pendent, allow for the wearer to insert their favorite flower to create temporary, one of a kind looks.

The Quadrifoglio Pendant, the Italian word for four-leaf clover, is a stylized work. Appearing almost as a knotted image, with an open center, it is meant as a symbol of good luck. While some are crafted in precious metals, others are created in silk. The Silk Quadrifoglio sits on a 30-inch silk cord, with a tassel. The center of the clover hosts a brilliant round diamond, set in 18 carat gold. The necklace is available in black, green, or red silk.

Other Images and Symbols

Other symbols incorporated into her work include letters from the alphabet, crosses, the star of David, and symbols from the Zodiac.

Elsa Peretti designs are stamped with the company name Tiffany & Co., along with the words PERETTI.  Most pieces come complete in the original blue Tiffany box or pouch. These are almost as prestigious as the jewelry they hold!

Elsa Peretti style has a classic and timeless look. Pieces purchased today will still be fashionable in a decade. These exquisite, well-made designs can easily become family heirlooms.