Tiffany & Co., is known not only for its fine selection of quality diamonds, but for their equally impressive array of colored gemstones. The jewelry company has always carried the finest rubies, sapphires, and emeralds. There are Elizabeth Taylor sized, special occasion rocks, to smaller pieces meant to be worn by modern women everyday.

Tiffany has also been instrumental in discovering and introducing other coloured gemstones into North America. Three of Tiffany’s top designers, including Jean Schlumberger, Elsa Peretti and Paloma Picasso, have all incorporated  a vast variety of colored stones into their jewelry creations.

An Introduction of Colored Gemstones

Tiffany & Co., opened its first store in New York, in 1837, as a fine stationary and fancy goods store. Owned by Charles Lewis Tiffany and John B. Young, initially it was called Tiffany, Young and Ellis. In 1853, Tiffany became the sole owner. The name of the store was changed to Tiffany & Co. The focus became fine jewelry.

Over the years, Tiffany has introduced some popular colored stones to the American public. Think kunzite, morganite. Tanzanite and tsavorite.

In North America, prior to the 19th century, colored stones were rarely used in jewelry design. Gemologist Dr. George Frederick Kunz joined Tiffany & Co., in 1876. The company gave him the freedom to select colored gemstones from around the world. This led to both the discovery and introduction of new varieties into the marketplace.

Stunning kunzite, with its pinkish, violet tones was named after Kunz, when it was discovered in 1902. The more vivid the color, the more expensive the gemstone. 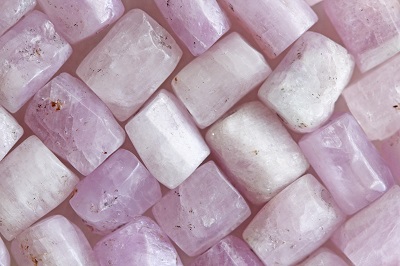 Morganite, discovered in 1910, was named after millionaire J.P. Morgan, who financed the expedition. A light to deeper pink, morganite, is more expensive than aquamarine. 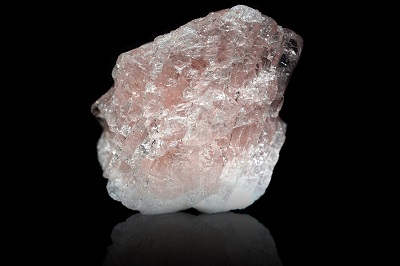 Tanzanite was introduced, in 1968. The vibrant blue purple stone was found near Kilimanjaro, in Tanzania, the country from which it was named. The same year tsavorite was discovered near the Tsavo National Park, at the Kenya Tanzania Border 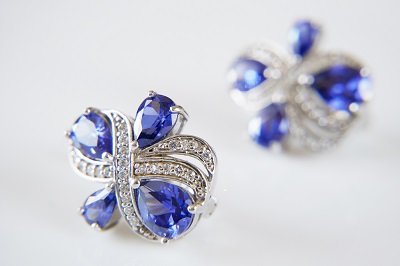 Jean Schlumberger, one of the most successful designers at Tiffany & Co., loved to use colored stones. This is especially stunning in his brooch designs. Many have been discontinued but are still available from vintage dealers. These works fetch a steep price! 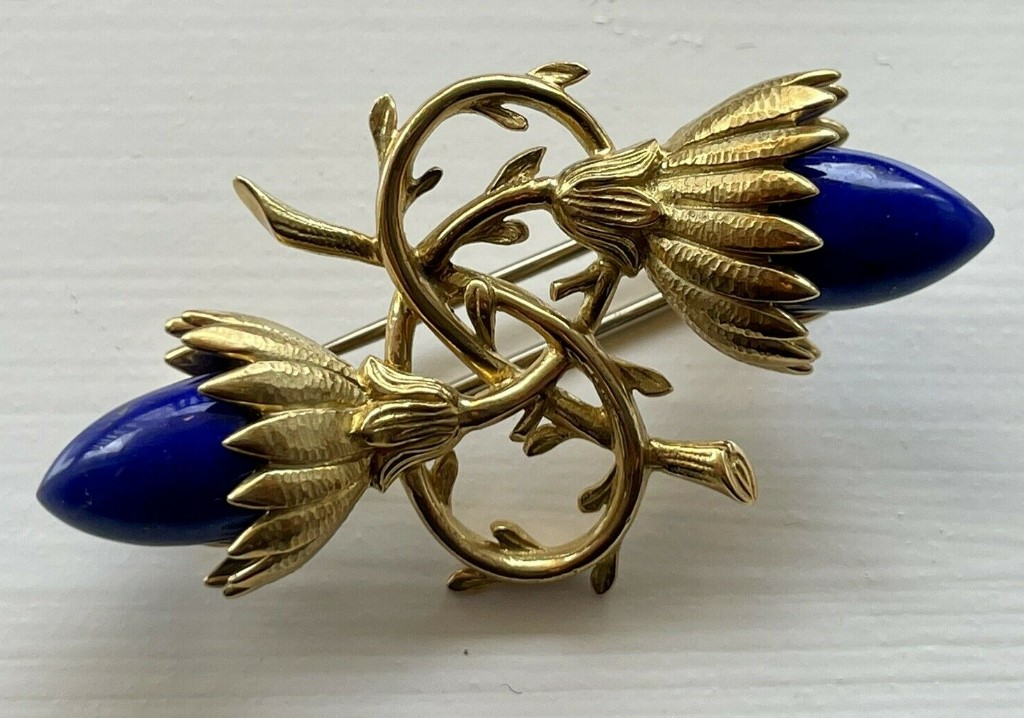 Think the famous Bird on a Rock pin. A glittering bird covered with diamonds walks upon a giant gemstone crafted in variations including aquamarine, citrine, tanzanite, and tourmaline. It is a classic.

Underwater creatures captured Schlumberger’s imagination. You will find fish pins with peridot and turquoise, or blue sapphires, with cabochon ruby eyes. Then there are botanical motifs such as thistle brooches with peridot and ruby, or sapphires and emeralds.

Color By the Yard

First, Tiffany jewelry designer, Elsa Peretti, designed the Diamonds by the Yard collection, in the 1970s. This was her most successful collection, and today still appears timeless. Delicate bezel set diamonds, scattered along various lengths of chains, appearing to float. The necklaces have matching earrings, bracelets, and rings.

Tiffany Color by the Yard Earrings from AmsJewelsInc on Etsy

Later Color by the Yard was re-introduced using colored stones. This variation on the collection includes gemstones such as blue, and pink sapphires, rubies, emeralds, aquamarine, tanzanite, pink opal, jade, turquoise and moonstone.

Like her father, artist Pablo Picasso, jewelry designer Paloma Picasso likes bold colors. The Paloma’s Studio collection pairs colored stones with geometric design. Made to be worn both on their own and stacked, hexagon shaped rings, feature a custom cut, colored stone, framed in 18k gold. Choose from green tourmaline, tanzanite, or rubellite. Match the rings to the Hexagon Pendant, with a 16–18-inch adjustable chain, and stud earrings. 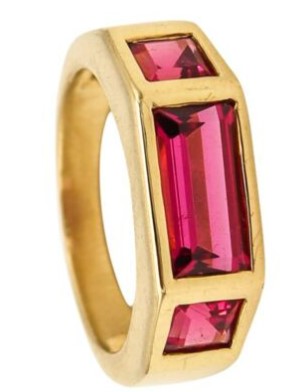 Bar Earrings, which are also part of the collection, pair two baguette-colored stones, set end-to-end, rimmed with gold. These rectangular shaped earrings add interest to the ear. Available in rubellite.

Colored Gemstones: A History of Engagements

Colored gemstones were given as engagement gifts throughout the centuries. Think royalty, movie stars and heads of state. Jewelers world-wide have crafted elegant, memorable pieces with these stones.

Emperor Napoleon Bonaparte asked Josephine for her hand in marriage, in 1796. He presented her with a diamond and sapphire engagement ring, each weighing one carat, set on a gold band.

One of the most famous sapphire engagement rings is the one Lady Diana Spencer chose for herself, when she became engaged to Prince Charles, in 1986. The stunning, oval cut, 12-carat Ceylon sapphire, is surrounded by diamonds, and is mounted in a setting of 18k white gold. When their son, Prince William, proposed to Kate Middleton, it was with the very same ring.

Prince Andrew, the younger brother of Prince Charles, presented his bride to be, Lady Sarah Ferguson, with an oval Burmese ruby, surrounded by leaf shaped diamonds, in 1986.

Not long after, Princess Diana’s younger brother Earl Charles Spencer was engaged to Victoria Lockwood, in 1989. He too chose a ruby, which he had custom made into a ring, to replicate one that Queen Victoria owned. A pear-shaped diamond and ruby sit side by side, encircled by diamonds. This replicates the shape of two hearts joined as one larger design. At the very top sits a crown, with a sparkle of small individual diamonds.

Emeralds have not been left out of engagements. John F. Kennedy presented his wife to be, Jacqueline Bouvier, with a diamond and emerald ring, each almost three carats in size.

Actor Richard Burton chose an 18-carat emerald brooch from Bulgari, to present to actress Elizabeth Taylor, when he asked her to be his wife. It was a non-traditional engagement gift instead of a ring, for their first engagement, and subsequent marriage. She wore it pinned to her wedding gown. Later he bought her matching pendant earrings, a necklace and ring. She often pinned the brooch to a chain and wore it as a pendant.

Diamonds have set the standard for engagement rings, since Tiffany & Co., first set the six-prong design in 1886. Other brides, when given the choice, prefer a beautiful colored gemstone.

Under the heading of engagement rings Tiffany only lists one: the Tiffany Three Stone Engagement Ring with Sapphire Side Stones in Platinum. One brilliant cut diamond sits in the center, with two velvety blue sapphires on either side.

Wedding bands for women include the Tiffany Embrace Band Ring. It features a half circle of alternating diamonds and rubies or diamonds and sapphires on platinum.

The coveted The Sixteen Stone Ring, by design Jean Schlumberger, is surrounded completely in gemstones, with a signature X between every two stones. Colored gemstones, with alternating diamonds include, rubies, and tsavorite, set in gold, or sapphires, in blue, or pink, set-in gold or platinum. It is the perfect wedding band.

Another beauty of a ring that would make a unique wedding band, is the Tiffany Victoria Vine Bypass Ring. Two rose gold vines, made from round and marquise cut pink sapphires, along with round, brilliant diamonds, cross over each other at the top of the ring. It is also available in platinum, with blue sapphires.

The Tiffany Nova ring is a stunning oval stone available in blue or pink sapphire, emerald or ruby. The delicate band is encircled entirely in diamonds. The setting is also available in a cushion cut or emerald cut.

Tiffany Soleste Ring has a colored gemstone in the center, surrounded by two rows of brilliant cut diamonds, which also expand along the band. Settings are available in  round  cut ruby, blue sapphire, emerald, or aquamarine. A cushion cut setting is available in tanzanite. Look for matching earrings and pendants.

Another stunner is the Tiffany Victoria Vine Ring in Platinum with a Tanzanite and Diamonds. Inspired by nature, the round cut, central tanzanite stone is looped with a diamond vine, with more diamonds around the band. It is also available in pale pink morganite, or soft blue aquamarine.

Tiffany’s Kunzite Ring is a stunning, and intricate design set on platinum. The 25.29 carat dazzling, pink kunzite, sits in the center, supported by a botanical motif basket design. This is crafted from round brilliant diamonds, marquise, and pear-shaped diamonds.

The Tiffany Anniversary Morganite Necklace is a diamond necklace, with a bow design, holding a 175.72 cushion cut, shimmering pink colored morganite gemstone. It is a one-of-a-kind creation.

The Tsavorite and Diamond Bracelet from Tiffany & Co., has an Art Deco feel. The thick band wraps around the wrist, in a geometric pattern comprised of baguette tsavorite and brilliant round diamonds.

You will find jewelry made with colored stones at Tiffany stores everywhere. For discontinued or preloved items, search reputable vendors online through Etsy and eBay. All  jewelry will be stamped Tiffany & Co.

Tiffany & Co, have designed beautiful jewelry using high quality, colored gemstones from around the world. These pieces are worth collecting, and a joy to wear.