The History of Edwardian Jewelry

Edwardian style of jewelry was named after British monarch King Edward VII ( 1841-1910 ) the eldest son of Queen Victoria. He ruled from 1901-1910. When Prince Albert died, Prince Edward was often at his mother’s side for official royal duties.

Delicate Edwardian jewelry designs were a backlash to the mass-produced machine varieties. During the last ten years of the 19th century large pieces were replaced with smaller, intricate jewelry to show it was both expensive and handmade. The style continued until 1914. It was the last jewelry to be named after a monarch.

Jewelry was a status symbol of the wealthy. A new, stable upper middles class also purchased fine jewelry. Those with tighter pocketbooks bought replicas made of cheaper materials.

King Edward VII was an adored ruler, a socialite, and a lover of luxury. He always dressed formally, wearing expensive styles to attend celebrations and gatherings as a prince and later king. As a young man, it is said that he changed outfits at least six times a day, as a display of his wealth and to always look fresh.

The king was a style icon, unbuttoning the bottom of his waist coat. This was a trend that gentlemen everywhere followed. Later, the king was bored with white ties and tails in the evening and started to wear formal black clothing instead. He set the stage for sophisticated fashion.

Edward met Princess Alexandra of Denmark and the two were married, at Windsor castle. Like her husband she became a fashion icon. Jewelry was a status symbol of the extremely wealthy. It was worn together in abundance. Woman wanted to wear the jewelry styles Queen Alexandra wore.

Queen Victoria and her Jewelry

Victorian jewelry was crafted during the Victorian era between 1837 and 1901. Queen Victoria loved jewelry. Not only did she inherit a great deal of it, but her husband Prince Albert also loved to gift it to her. 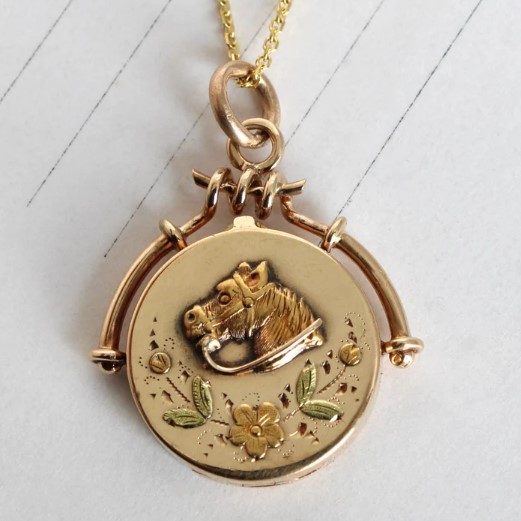 Lockets became popular, colored stones for evening jewelry, and symbols of love including hearts were all part of Victorian jewelry design. Objects from nature were used as motifs, such as flowers, insects, and animals. Some of these motifs continued onward in Edwardian styles.

The cameos Queen Victoria popularized continued to be pieces women coveted in their jewelry collections.

Other Influences on the Edwardian Style

The Edwardian era was also a time of the Arts and Crafts Movement, as well as the Art Nouveau Period. While all three styles were in reaction to the mass production of the industrial age, all remained distinct. Edwardian jewelry did however borrow the “garland” style from Art Nouveau. The fluidity of the line was incorporated into traditional styles creating Edwardian jewelry as it is known today.

Jewelry designers reached into the past, utilizing looks from the 17th and 18th centuries and the Court of Versailles. Patterns from architecture provided style. Think French Baroque and Rococo. Cartier, the fine jeweler encouraged designers to walk the streets of Paris looking for inspiration from the buildings.

Classical Roman and Greek design elements were also apparent. Some Indian designs made their way into jewelry from the king’s wife Queen Alexandra, who adored it. 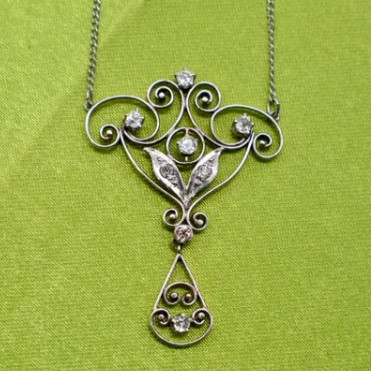 Platinum changed the jewelry industry in the Edwardian era. Early examples of platinum, used to create fine jewelry involved a backing of gold or silver. It wasn’t until 1903, with the invention of the oxyacetylene torch, that jewelers were able to work at high enough temperatures, to craft in pure platinum. The strong metal could now be designed into delicate lace like formations or petit point embroidery styles, with openwork filigree. This enabled invisible settings where gemstones appeared to float on the skin.

The knife edge setting used minimal platinum wires. Another method was to use a milgrain edge, on a low bezel of tiny beads. Both methods allowed for the gemstone to be the main focal point. 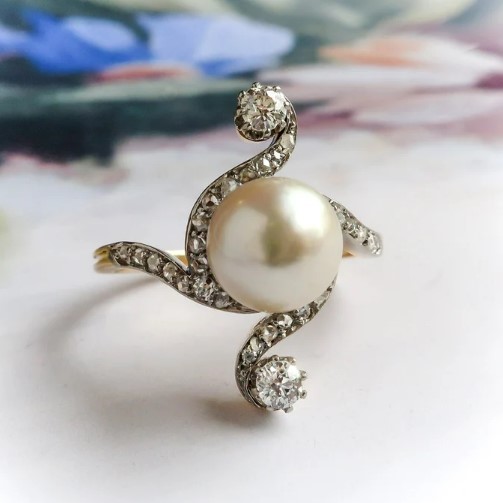 Women wore pastel dresses and the new platinum jewelry with pearls and/or and diamond jewelry, also called “white on white jewelry”, were perfectly matched. The trend lasted until World War I, in 1914.

During this time parures or matching sets of jewelry were no longer a part of a women’s wardrobe. White on white jewelry enabled a woman to have jewelry that looked matched and monochromatic in color but remained distinctly different in style. 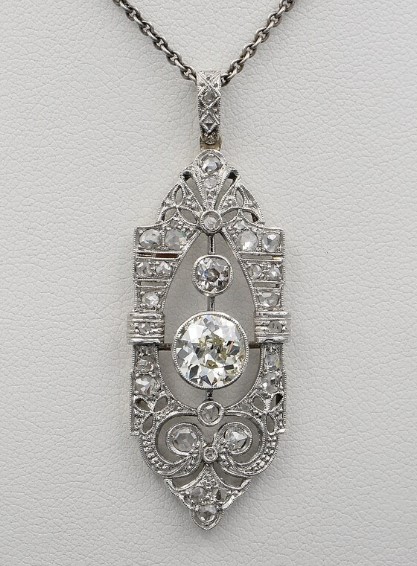 Edwardian 1.45 Ct Diamond and Platinum Pendant from hawkantiques on Etsy

Diamonds were more accessible and affordable with the founding of De Beers Consolidated Mines Ltd in the late 1800s. Within Edwardian style diamonds played a huge role. These sparkling gemstones featured a multitude of diamond cuts within the same piece of jewelry.  Think old mine cut, old European cut, rose cut and marquise cut. In 1902 Joseph Asscher invented his namesake cut, an octagonal shape with 74 facets. 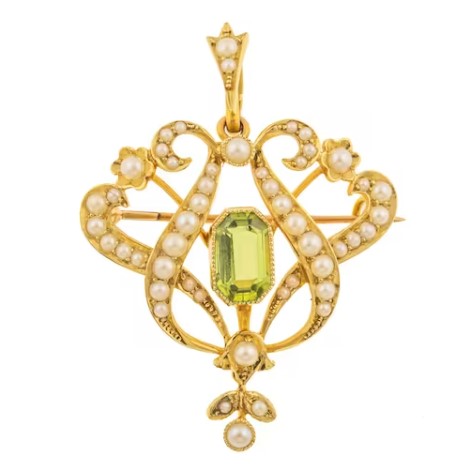 Antique Gold Peridot and Pearl Pendant from Lillicoco on Etsy

Pearls were considered much more rare, precious, and more expensive than diamonds. Cultured pearls had yet to be perfected. This began with the introduction of Mikimoto cultured pearls, in 1905.

Natural round pearls were incorporated into designs, as well as seed pearls. 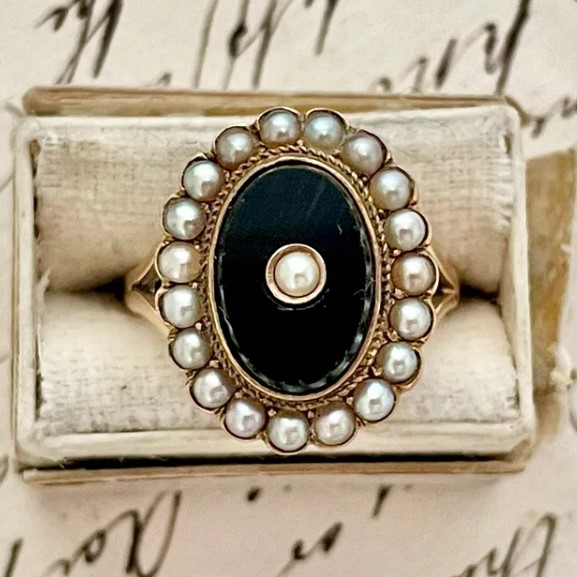 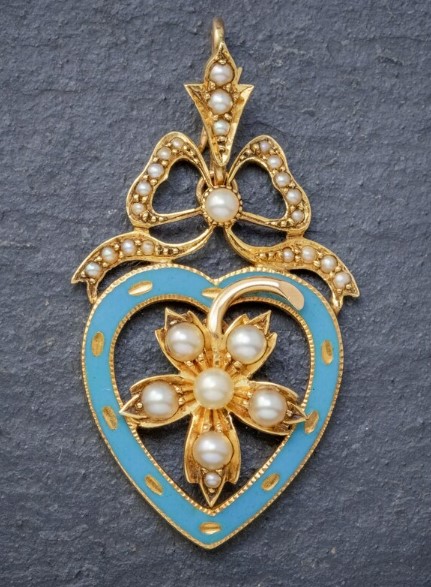 Bar brooches with colored stones and diamonds were worn at the neckline. Round brooches often had large colored stones in the center. It was fashionable to wear numerous pins at one time.

Necklaces were piled on in Edwardian times. Dog collars, the necklaces that originated in France, in 1853, were comprised of a velvet ribbon worn tight to the neck, with a buckle, or floral central design. These pieces of jewelry often contained diamonds. By 1880, dog collars gained popularity in England. The velvet was replaced by multiple strands of pearls worn as chokers. This was popularized by Queen Alexandra.

Long pearl necklaces were layered on, and often fell to the waist.  Sautoirs were long  ropes of pearls and sometimes beads, with tassels on the ends. These were simply wrapped around the neck to hold them in place. Lighter style included long fine chains, with alternating pearls and gemstones, that could wrap around the neck multiple times. 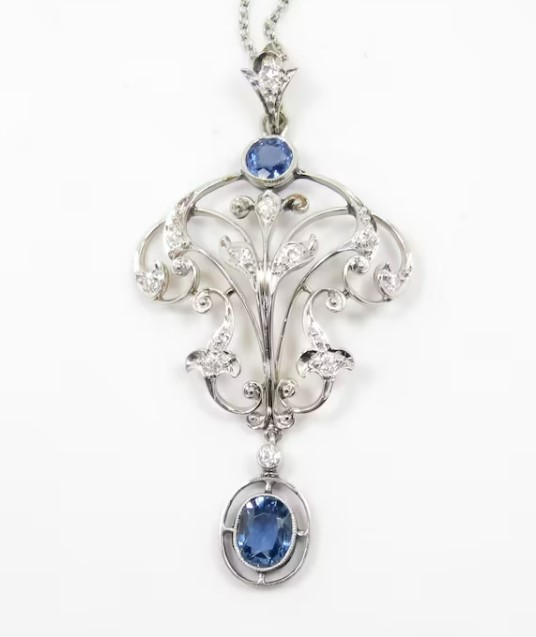 Sapphire and Diamond Edwardian Necklace from MagpieVintageJewelry on Etsy

The lavaliere necklace that was popular between 1600-1700 was a pendent necklace, with a singular round, oval, or pear-shaped gemstone. It became a trend setter when worn by the King Louis XIV’s mistress Louise de la Valiere. The style came back in fashion in the Edwardian era. It was known then as lavalier for French actress Ève Lavallière. A négligée is like the lavalier but contains two gemstones at different lengths. 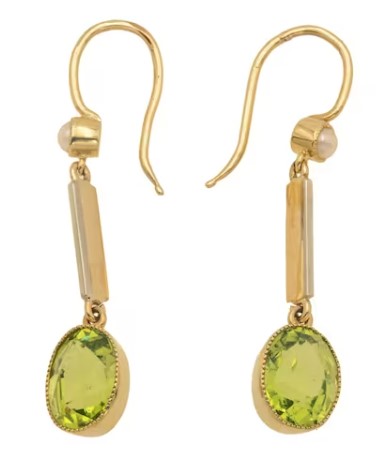 During the early Edwardian era earrings had a singular diamond or pearl. Later, dangle earrings often had a tear shaped pearl or stone at the bottom. Others had pearls surrounded by clusters of diamonds or colored stones with drop pearls. Dangle cameos were crafted to face toward one another.

Large chandelier earrings were made to contain large stones diamonds in old mine cut and smaller ones in rose cut. Filigree work created impressive designs. 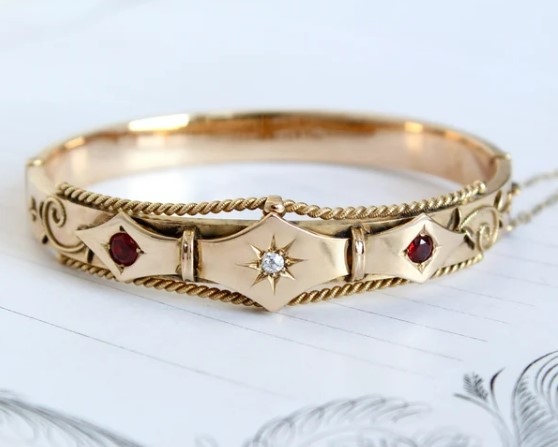 Bangles have buckles, serpents, dragons, diamonds, and colorful stones. Link bracelets feature dangling hearts, with locks and keys or floral motifs. Women of the Edwardian era wore far fewer bracelets than during Victorian times. Often only one bracelet would adorn each wrist. 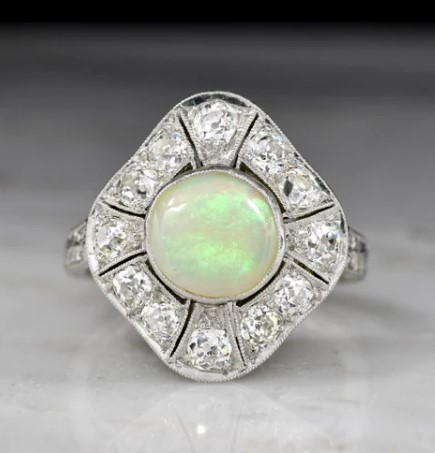 Edwardian Dinner Ring With Opal and Diamonds from pebbleandpolish on Etsy

Popular styles of rings in the Edwardian era included colored round central stones, encircled with a halo of small diamonds or colored stones. Others relied on intricate filigree work and a large stone in the center, in round, oval, or emerald cut. Many are set with three round stones. Five stone rings set in plain bands, feature a larger stone in the center, with stones that taper and become smaller on each side.

Cameo rings were also in vogue, with profiles of women’s faces or Roman gladiators carved from shell.

The End of the Era

In 1914, with the onset of WWI, platinum was needed for the war effort. The party and Edwardian jewelry was over.

Search for Edwardian antique jewelry from reputable dealers on Etsy or eBay.

What is Victorian Jewelry?