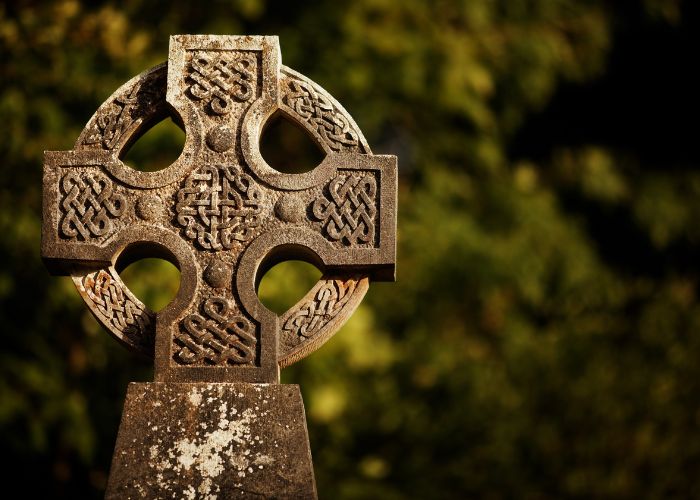 What is Celtic Jewelry? In this article you will learn about the history, materials, and motifs of this ancient art style.

With its long history dating back to the Stone Age, you will find many incredible pieces of ancient Celtic art and jewelry in galleries and museums around the world. Today, Celtic jewelry combines the art from the Celts, with the traditions of Old Ireland and the Christian religion.

The History of the Celts and Jewelry

The Celts were originally from Russia and settled in Germany and Austria, in 1200 BCE. In Austria, the Hallstatt culture were known for their incredible works in metallurgy. A burial site discovered here revealed over 1000 graves, many filled with decorative jewelry items. These fanciful pieces included intricate geometric designs and spirals.

Continual war with the invading Romans, forced many Celts to spread across the continent, landing on the islands of Britain and Ireland in 500 BCE. The Romans never conquered Ireland.

The La Tene period, after 500 BCE, saw Celtic artists in La Tene, Switzerland, develop even more sophisticated jewelry. Objects found at a burial site revealed an ample collection of jewelry including 400 brooches. Styles were influenced by the classical Egyptian, Greek, Etruscan, and Roman styles. Elements representing the motifs of war were found on many of the pieces such as spears and shields.

In ancient Celtic jewelry you will see the use of iron, bronze, silver, and gold, with semi precious stones including amber, as well as red coral from the ocean, and ivory from African animal tusks.

Christianity reached Ireland in 600 CE. The Book of Kells, now at Trinity College, in Dublin, Ireland, is an intricately crafted illuminated manuscript. It’s an exemplary example, but one of many manuscripts created by monks in monasteries to honor and teach religious gospels

Illuminated manuscripts used stylized and complicated animal forms to create patterns, such as interlocking snakes or other zoomorphic images. Interlacing, the use of lines that tightly twist, to form spirals and knots is also used to fill in all spaces on the page. These forms and patterns would later be emulated and transformed into Celtic jewelry.

As always, jewelry loving Queen Victoria (1819-1901) was ahead of the trends. By the 1840s she was already wearing Celtic Revival jewelry.

The famous Tara Brooch was found on a beach near Laytown, in County Meath, Ireland, in 1850. The exquisite Celtic brooch was crafted between the late 7th and early 8th century. Made from 50 different panels of bronze, silver and gold, the highly ornate pieces contain complex filagree, spiral patterns, interlacing, and colored studs.

Given the size and detail of the Tara Brooch, art historians confirmed it was made for a high-ranking member of Early Medieval society. It was used as a status symbol and had the utilitarian purpose of holding his cloak in place.

Dublin jeweler George Waterhouse purchased and placed the antiquity in the centre of his window display of Celtic Revival replica pieces. The Tara Brooch traveled to the Great Exhibition, in London, in 1851, then back to the Dublin in 1853 for the Dublin Great Industrial Exhibition. In 1855, the Tara Brooch was part of the Paris Exposition Universelle. The popularity of Celtic jewelry continued to soar!

Today Celtic jewelry is available in both fine jewelry designs, as well as costume jewelry.

In ancient times, pagan culture told stories through words and performance. Writing it down was forbidden. This knowledge was considered too sacred. Today, much of this information was lost. Art historians and archeologist have developed theories.

Spirals are popular motifs in Celtic jewelry. The symbol had significance to the Celts and is found carved in stone at many burial sites. As nature worshippers the best theory is that a single spiral represents the sun or the galaxy.

There is speculation that a double spiral could represent the summer and winter solstices, or the equinoxes in the spring and autumn.

Double spirals are prevalent on many Celtic grave sites. A popular motif is a counter clockwise spiral, joined with a clockwise spiral. Historians have speculated that when these two opposing forces appear joined, it symbolizes death and rebirth.

Triskele is the word used to describe three spirals attached together. It’s of Greek origin and shortened from the word Triskeles. It translates into “three legs”. 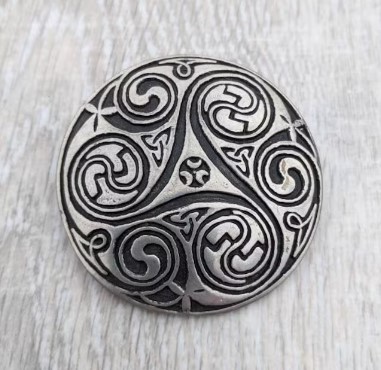 The Triskele is a symbol that has many interpretations. Most notably the Triskele appears at the entrance of Newgrange, in Ireland’s Ancient East. To the farmers that built the 5,200-year-old Stone Age passage tomb, the symbol had significant meaning.

The number three was important to the Celts. They believed that everything good in the world presented itself in groups of three. Think the earth, sky, and sea, or the three phases of the moon.

The Trinity Knot is a pre-Christian symbol representing the Goddess Odin. Also called the Triquet Knot, symbol was adopted by Christians to represent the Father, Son, and Holy Ghost. The three-sided knot encircled in a round also takes on the promise to love, honor and protect. 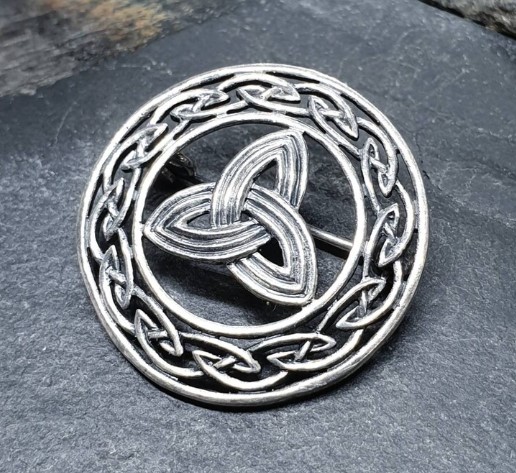 The Lover’s Knot is the symbol created by sailors. It was tradition to weave intricate knots as a gift to the ones they loved. The interlocking squares have points at each tip.

Trees were central in Celts life and the Tree of Life or Crann Bathadh represents nature and harmony. When clearing land, the Celtic people always left one tree standing, as a sign of respect to nature. Each large tree acted as an important destination for ceremonies. In fact, this included the crowning of the local Chieftains. The Tree of Life is a powerful symbol in Celtic jewelry. 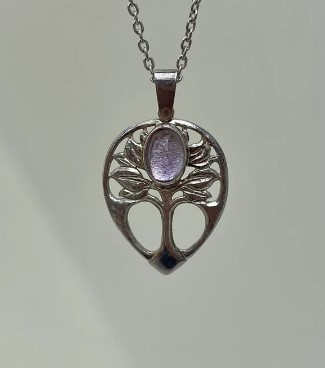 In the early days of Celtic civilization Ogham was the first form of writing. It is comprised of characters that represent letters. Nature loving Celts named each letter after a plant. Words were carved on stone or wood to represent land ownership or signify events.

Ogham Stones contain etching on stones, many of which are still standing in the countryside of Ireland. It is interesting to note that examples of Ogham stones found in Great Britain contain not only Ogham, but writings in Latin and Roman. Irish Ogham stones are written exclusively in Ogham. 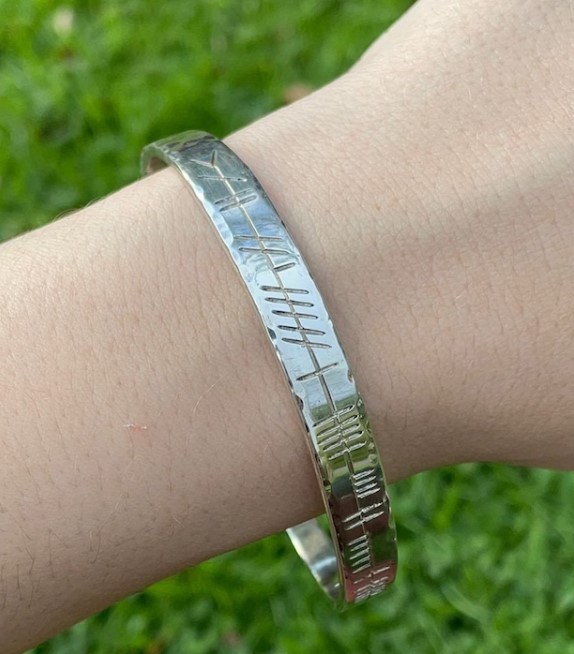 Ogham Bangle from TheIrishJeweller on Etsy

Of course, there is a legend about Ogham. The story goes that Ogma, the son of An Dagda created the language, as the God of Eloquence and Literature, and a powerful warrior.

The Celtic Cross is a symbol that is both Christian and pagan. The circle was the symbol used by pagans to represent the sun. 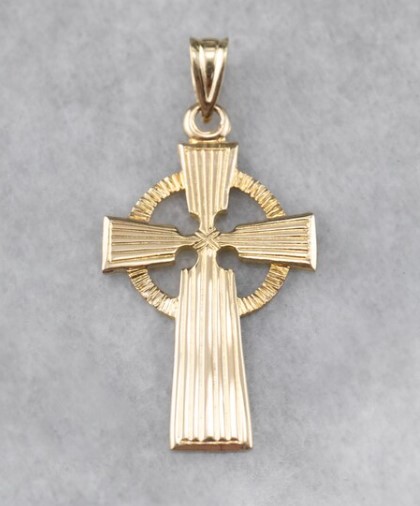 St. Brigid, born in 450 CE., established the first Irish monastery in County Kildare, Ireland. She originally crafted this design out of rushes. It was said that Brigid’s Cross would keep out not only evil, but the risk of hunger and fire. 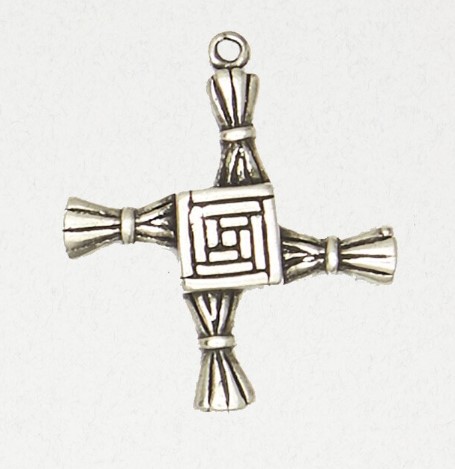 In a story of myth, an Irish sailor named Richard Joyce was kidnapped by pirates and sold into North Africa. Learning the art of goldsmithing, he later escaped, returned to Ireland, and crafted the Claddagh symbol into a ring for his beloved. The Claddagh symbol is instantly recognizable, with a central heart, with two hands around the outside and a crown on top. The hands are a symbol of friendship, and the heart a symbol of love, while the crown represents loyalty.

The Irish have created a beautiful tradition with the Claddagh ring. It is often handed down through the generations. 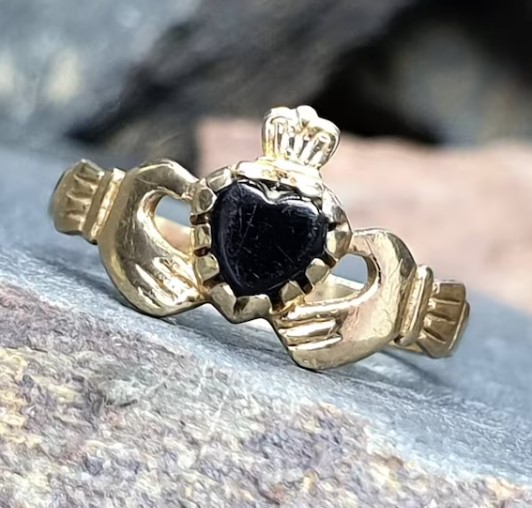 Of course, the Claddagh symbol is also made into earrings, necklaces, bracelets, brooches, and cufflinks.

Irish Druids believed the shamrock was magical. Not only did it contain three leaves, but the shamrock could predict rain by reaching its leaves upward. Clovers were thought to bring luck. A four-leaf clover especially! 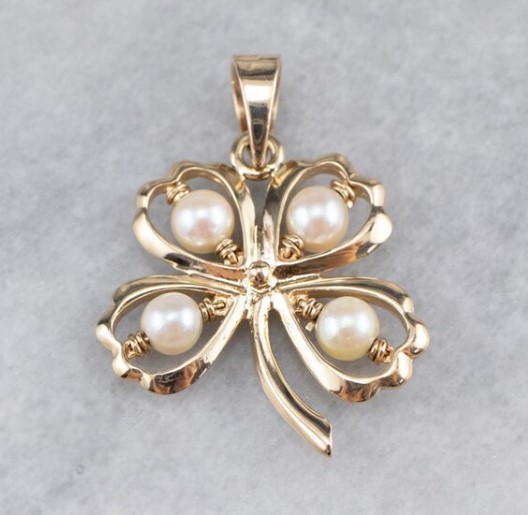 St. Patrick used the shamrock as a way of converting Druids into Christians, by using the leaves to demonstrate lessons about the Holy Trinity.

To rebel against the Crown, the Irish proudly wore the shamrock in the early 19th century. Legend has it that the shamrock is the only way to break a leprechaun’s curse. Most importantly, it is the symbol of St. Patrick’s Day.

For vintage pieces have a look at Etsy and eBay to purchase pre-loved Celtic jewelry.