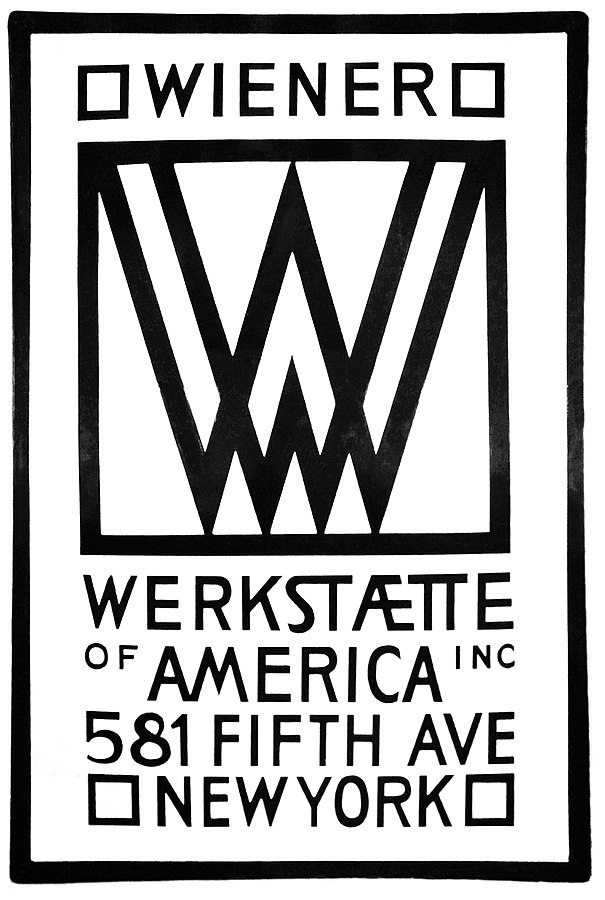 Want to learn more about Vintage Wiener Werkstatte Jewelry? Learn about the history, designers, collectible pieces and where to buy.

“The works of the Wiener Werkstatte show riches that have been concealed inside the material, a treasure that had to be raised,” contemporary Austrian journalist and art critic, Josef August Lux, on the Werkstatte's jewelry.

Brief History of the Wiener Werkstatte

The Wiener Werkstätte (“Vienna Workshop”) was established in 1903 in Vienna, Austria, by Josef Hoffmann, architect; Koloman Moser, graphic designer and painter; and a financial backer, industrialist Fritz Waerndorfer. The original members also included  Dagobert Peche, architect; Karl Kallert, silversmith; and Konrad Koch and Konrad Schindel, both metalworkers. The Werkstatte was a cooperative of artists and artisans with the goal of narrowing the gap between artistic genres, giving each its due for the betterment of the whole, and affording each maximum exposure.

Ceramics, fashion, silver, metalwork, leather work, wood working and the graphic arts were included in the “fine arts” that once defined painting and sculpture. The group determined that they would provide the highest quality materials and workmanship for an elite clientele who would appreciate the artistry as well as the practical usage. The Werkstätte allowed complete artistic freedom which resulted in a  prodigious output of designs executed by many skilled craftsmen and distributed via a large cooperative network.

Jewelry was among the first objects produced by the firm. Josef Hoffmann and Koloman Moser were determined that jewelry would be valued for its artistic merit and not simply for how much it cost. It was because of the Werkstatte that the first museum exhibition composed only of jewelry occurred.

Many of the wearable works of art produced by the Wiener Werkstätte were unique. A piece featured the designer's artistry and the craftsman skill. The value was not in the materials used. These miniature works of art made a statement about the wearer—that she was a woman of the arts and sophisticated. The idea of jewelry as a status symbol was eroding. And the society ladies loved it! They often wore their jewels as a symbol of their independence. They also became unofficial “models,” advertising the message of the Werkstätte.

In addition, a magazine, German Art and Decoration, beautifully photographed the jewelry (as well as all Werkstatte products) to display on their pages. For the jewelry, they included in the photograph the the handmade leather box that accompanied each piece—a keepsake in itself.

The signature style of the Werkstatte for brooches, hair combs, necklaces and belt buckles was an outer framework, usually rectangular, filled with various elements such as sinuous tendrils, flowers and leaves that softened the severe frame. Multi-colored gemstones were used much as a painter uses his palette. This style left a good deal of open space, so that the wearer's garments would show through, adding interest and color.

Following World War I, the workshop had financial problems and problems getting the necessary materials. It never regained its pre-war prestige. A last-ditch effort to establish a branch in New York City failed miserably. By 1932, the Werkstatte was forced to close. 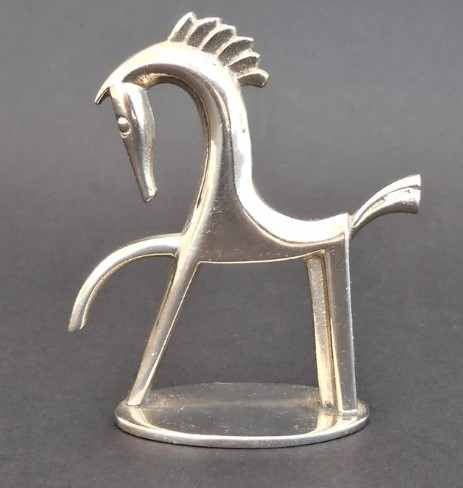 Josef Hoffmann, architect, created jewelry designs that were geometric. In fact, he used the same graph paper to draw his jewelry designs as his building designs. Later, Josef's style became less severe, more sensuous, influenced as he was by Japanese prints.

Koloman Moser, graphic illustrator, preferred designs based on flora and fauna. His signature pieces were pendants swinging from long chains that were worn with loose, flowing clothing.

Josef Maria Olbrich, architect, was one of the original members of the Wiener Werkstatte. He experimented with designing ceramics, musical instruments and multi-shaped windows, as well as jewelry. His jewelry is very difficult to find. His pieces tend to be simple and geometric but with a harmonious fluidity. 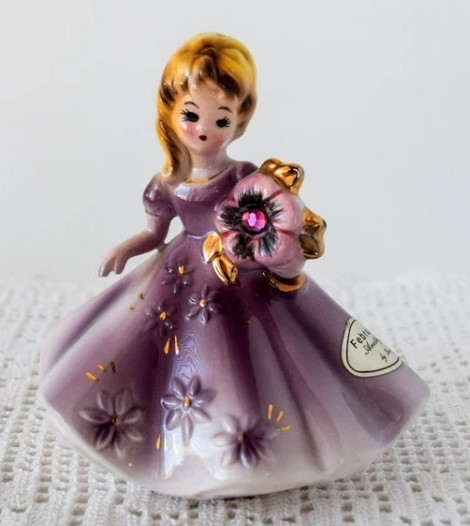 Carl Otto Czeschka, painter, also was inspired by nature. Many of his designs included a vine motif. It was Carl who was at the forefront of the Werkstatte's transition from geometric designs to a more decorative approach and to an inclusion of both animal and human figures.

Eduard Josef Wimmer-Wisgrill, architect, designed sets and costumes for theatrical productions. He was head of the fashion department for the Werkstatte, and his jewelry was an important element in the clothing he created. He was partial to jewelry adorned with leaves.

Dagobert Peche, architect, had a true passion for jewelry. He was meticulous with his designs, creating each piece as one would a sculpture—by considering how it would look from every angle. He favored mythological themes and characters. Many of his pieces were rendered in ivory due to metal shortages during World War I. Josef Hoffman said that he “was the greatest ornamental genius Austria had produced since the Baroque” (a cultural movement in the early 17th century).

Maria Likarz-Strauss, enamelist and textile designer, produced nearly 200 designs for the Werkstatte. Workshop, most of them in geometric or abstract patterns. Her designs were among those that paved the way for the Art Deco style. Maria's sewed thousands of glass beads around a silk chord for the stylish yet quirky ladies of the time.

Max Snischek, textile designer, was most famous for his fashions, but he also worked in enamel and jewelry, his style sophisticated, sleek and often with the angularity that would become Art Deco. 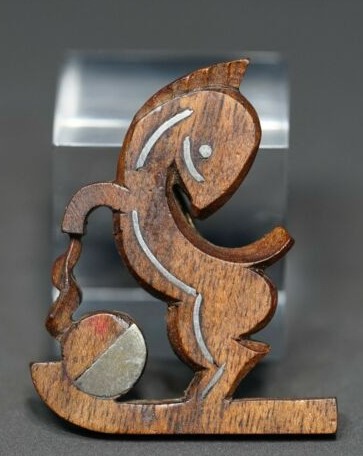 Most of the objects produced in the Wiener Werkstatte were stamped with the double “W” and two monograms, one for the designer and one for the craftsman. It was a way to acknowledge the importance of all three. Koloman Moser designed the monograms—square shaped for the artists and round for the artisans.

You can see examples of these monograms at Lang Antiques.

Other Collectibles From the Wiener Werkstatte

From 1904 for several years the Wiener Werkstaette had its own carpentry workshop. But only few furniture´s were made there.

Most of the furniture known as Wiener Werkstaette Furniture were made by such excellent cabinet-makers as: Portois & Fix, Johann Soulek, Anton Herrgesell, Anton Pospisil, Friedrich Otto Schmidt, and Johann Niedermoser. 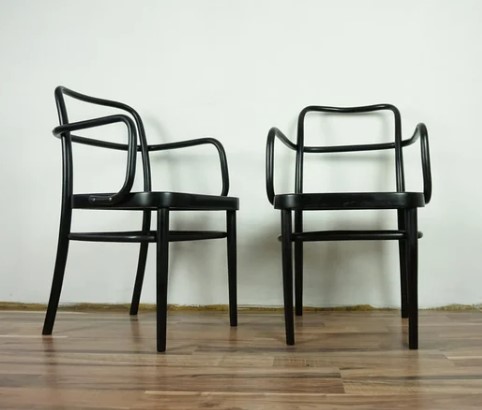 Thonet Armchairs Nr. A 64 F by Gustav Adolf Schneck from Mabodesign on Etsy

Some historians now take measure to the Werkstaette´s articles of association, when they agreed that the Wiener Werkstaette is a production cooperative with equality of designing artists and executing craftsmen and they say that there are almost no original Wiener Werkstaette Furniture existing.

Hoffmanns significance as an early industrial designer for bentwood furniture can hardly be overestimated. For the firm Jakob and Josef Kohn he designed a furniture series which convinced through its simple forms and also had a timeless elegance.

As well as leather goods, enamel, jewelry, postcards and ceramic, the Wiener Werkstatte even had a hat department. After the wartime of the First World War the Wiener Werkstatte was influenced by a new generation of artists and craftsmen. The most important impulses came from Dagobert Peche.

In 1907, the Wiener Werkstätte took over distribution for the Wiener Keramik, a ceramics workshop of kindred spirit headed by Michael Powolny and Berthold Löffler. 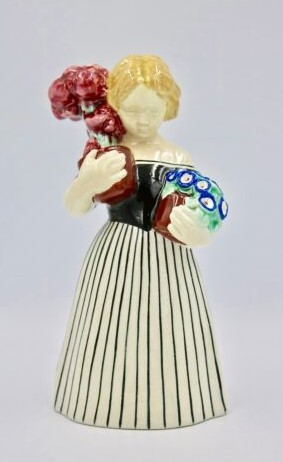 The founding of textile and fashion divisions in 1909 and 1910 brought a further shift in the Wiener Werkstätte's emphasis-- away from the architectural and toward the ephemeral.

Keep your eyes on eBay for when a Wiener Werkstatte item is put up for sale. Click here.

Also, Etsy has a selection of items on their Wiener Werkstatte pages.