Walter's warmth, creativity, and humor were reflected in his jewelry, as was his respect for his customers, employees and colleagues. Each piece of jewelry, whether created with platinum or gold fill, diamonds or rhinestones, was given the same meticulous attention to detail. If you are looking to add some vintage Walter Lampl jewelry to your collection, you have come to the right place. In this guide you will learn about the history, designers, jewelry marks, materials, and tips on how to buy.

Walter Lampl was born into poverty in New York City in 1895. Even as a child, he worked hard and was determined to make a better life for himself and his family. His first job was selling newspapers on the city's streets. In his teens, he bought lengths of chains and cut them, finished them off, and sold them for watch chains. He never got over his fascination with jewelry.

When he was only 26 years old, he opened his eponymous wholesale jewelry company on NYC's 47th Street. He soon decided to design his own jewelry and hired several female jewelry designers, he overseeing every step of the process. His store's slogan was “Creators of the Unusual, As Usual.” Walter created jewelry for a broad spectrum of tastes and budgets, from the finest of fine jewelry to costume jewelry—all beautifully rendered.

His business was a perfect expression of his inherent kindness. His brother Joe was a salesman, as was his son-in-law, Jerome. During the Depression, he hired the husbands of his female employees if they needed work. He assisted in getting his brother-in-law's Jewish family members out of Nazi Germany. When he saw newsboys out in the cold winter weather, he bought up all their papers so they could go home.

Due to its rich history and versatility, Walter loved jade, so much so that he campaigned to have it be named the birthstone for November in 1927. He did not succeed, but it gives great insight into Walter.

In the late 1930s, he was granted exclusive rights to produce souvenir charms for the New York World’s Fair. The mechanical works of art was more evidence of Walter's reputation for excellence. One charm was called, “Tomorrow’s Heirloom, the Theme Charm,” a tiny movie camera with a glass lens. About that same time, he moved his showroom uptown to prestigious 5th Avenue. All his hard work, insistence on quality products and kindness had paid off.

In the early 40s, Walter introduced his enamel heart charms, one for each month with the corresponding flower and birthstone. Many had moving parts, tiny mechanisms, and secret places that could contain a photo or message. The inventory of charms eventually grew to more than 750, depicting every taste, theme, hobby, profession, etc. Some held tiny business cards or folded $1 bills.

Disaster struck on December 7, 1941, and before the end of the month, Walter had designed “The Patriot Pin” with a globe, a pearl representing Hawaii, a Japanese airplane and banners in red, white and blue declaring “Remember Pearl Harbor.” They sold for $1, and Walter donated 10% to the Pearl Harbor Relief Fund. In January 1942, the pins earned $1,630 for the fund. That was like $41,000 today.

On the afternoon of Christmas Eve 1945, during the company party, Walter suffered a fatal heart attack. He was only 50 years old. His grief-stricken employees pooled their talents and money to create a bronze plaque with an image of their beloved leader smoking his pipe and “In memory of Walter Lampl 1895-1945, Dedicated by his Devoted Employees.”

Sylvia and Walter, Jr., managed the company for 14 years. They were successful enough, but Sylvia decided to close the business in 1959. They had offers from prospective buyers, but could not imagine the company being run by anyone outside the family. 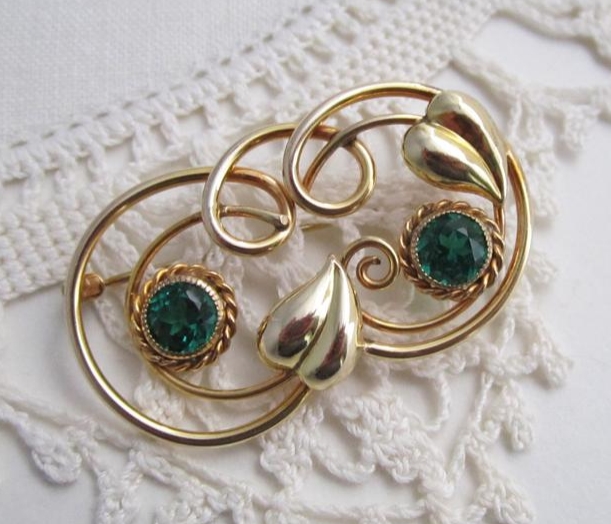 Walter hired women as jewelry designers, and he oversaw the work from start to finish. We have the names of three designers, Nat Block, Maybelle Manning, and June Redding, but know nothing else about them.

There are not many records around, so we cannot know the precise date of most of the hallmarks. Also, some pieces were not marked. 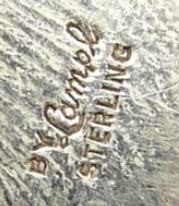 1940s - Crafted in solid sterling silver with a hand-painted guilloche enamel depicting a rose in shades of white, green and pink. Add it to your charm bracelet or wear as a pendant.

1944-1945 - The “Walburt” line named for Walter's two sons, Walter, Jr., and Burton, was produced less than two years, so any Walburt piece is a real find. The mounting is gold-plated and adorned with four oval ruby rhinestones and cascades of round emerald rhinestones.

1940s - Gold-filled brooch featuring a series of rings: one made of gold mesh with an overlay of gold leaves and vines and pink-topaz glass, then a narrow ring with aquamarine glass baguettes, at the top an elaborate bow. Can be worn as a brooch or a pendant.

1941 - One of the greatest patriotic jewelry designs of WW2, Walter Lampl created it shortly after the attack. It has a globe with a Japanese plane above it, a faux pearl for Hawaii and three banners in red, white and blue with the words “Remember Pearl Harbor.”

The great thing about Walter Lampl jewelry is that, since the company closed in 1959, every piece you find is vintage. The good/bad part is that the jewelry was only made from 1921 to 1959, which makes most pieces limited—a good thing. But it also means that there are fewer pieces around to collect—not so good. But the jewelry is so charming, many pieces are unique, and they are so distinctively Walter Lampl that collecting is worth the extra time it may take.

Please see the Walter Lampl pages on Etsy for a beautiful overview of what you can find when you enjoy searching. Another source for vintage Walter Lampl jewelry on eBay.