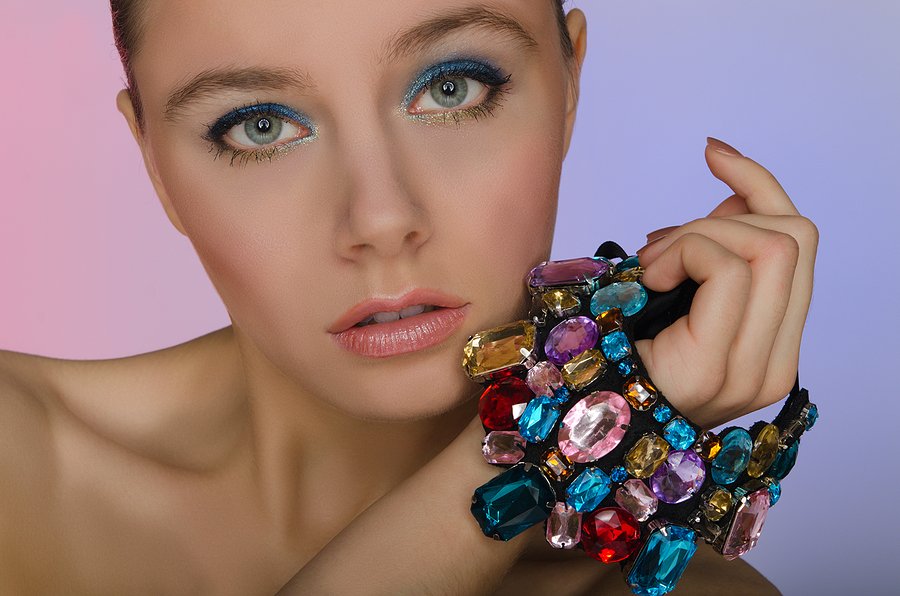 Curious about vintage rhinestone jewelry? Learn about the history of rhinestones, what designers used them, and how to buy.

Long, long ago, along the banks of the Rhine River that flows through Central and Western Europe, beautiful natural stones, quartz pebbles with a high lead content, were found. Jewelers cut the “rhinestones” into little imitation diamonds. Demand was great and eventually the supply was depleted. So jewelers and craftsmen created man-made rhinestones. Since then, rhinestones have been used to create costume jewelry, as much in demand today as it was hundreds of years ago. 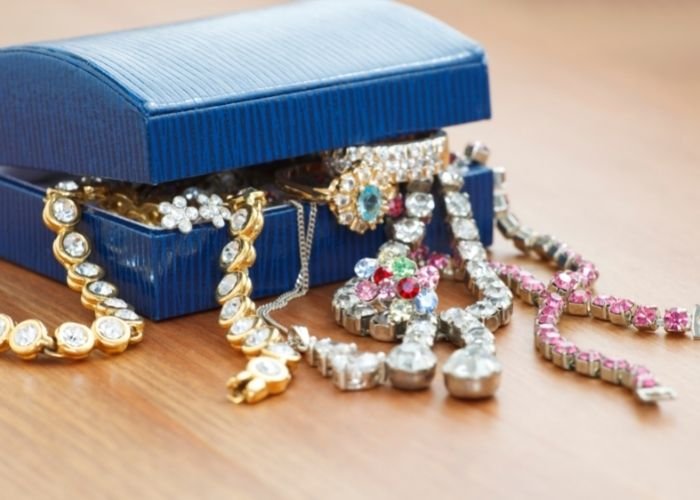 In 1680, jewelers made the first sparkly bead necklaces with the pebbles from the Rhine River.  The rhinestones were perfectly cut and exquisitely polished and, therefore, very expensive, a “must-have” for the aristocracy. The stones dazzled due to their tiny imperfections which caused incoming light to bounce around. They did not require any special backing.

Later, when rhinestones were man-made, they were individually handcrafted, the diamond-like sparkle due to the back side of the glass coated with a metal powder or metal foil that acted as a mirror reflecting light. The process was time-consuming and, still, only the wealthy could afford rhinestone jewelry.

In 1892, Daniel Swarovski, son of a Bohemian gem cutter, invented an electric machine that enabled crystal to be cut much more precisely than by hand. The machine could mass produce high-quality rhinestones with a much higher lead content than other rhinestones of the day.

The brilliance of these rhinestones was superior to anything seen on the market. Swarovski revolutionized the making of these more-affordable rhinestones.

During the Victorian Era, extravagant jewelry heavily adorned with rhinestones was very popular. After a period of more subtle jewelry, the Edwardian Age brought back the extravagance of rhinestone jewelry, often worn in place of diamonds.

Costume jewelry was all the rage in the “Roaring Twenties” with bold geometric designs and dramatically colored rhinestones. Rhinestones remained popular even during the Great Depression. They represented an affordable “treat” and could perk up an old outfit. By the 1950s, young women wanted casual, flirty, fun jewelry. Some of the items were made completely from rhinestones.

In 1956, Daniel Swarovski’s grandson, Manfred, introduced the Aurora Borealis: rhinestones with an iridescent coating that produced a glittering rainbow effect.

There was no place for rhinestones in the hippie fashions of the 1960s, but the mid-1970s brought about the punk look and the disco movement—both put rhinestones back on center stage. Since then, rhinestones have been used for every type of person, for the fun gal, the bride, the business woman, the mature woman.

Many designers created costume jewelry during the 20th century. Here, we give a few examples of the more popular ones, but it is also rewarding to collect a lesser-known designer. First, find the jewelry you most cherish, then begin your collection.

In 1918, Hattie founded her full-scale clothing line and, in 1939, began offering “cocktail jewelry” (costume jewelry) to put the finishing touches on her fashions. While her fashions were conservative, her jewelry was bold. Her jewelry became popular on its own—first with celebrities and socialites, then with all American women. Her bracelets and necklaces, in particular, were adorned with large rhinestones that look like expertly cut precious gems.

Coco Chanel was a French fashion designer who popularized sporty, chic fashions in the 1920s. She was also among the first to make rhinestone jewelry the “cat’s meow” during the Roaring Twenties. Chanel preferred to accessorize with many pieces of costume jewelry rather than be limited to one or two expensive items.

Christian Dior founded his fashion house in 1947. His fashions were the New Look, including his very feminine, long, swirling skirts. His jewelry was as much a part of the “look” as his fashions. Dior and Swarovski have been intertwined ever since. From the single drop-shaped crystal to a cluster of vibrantly colored crystals, Dior fused fashion with jewelry using Swarovski crystals that, according to Dior, “light up and enhance the face.”

Jonas Eisenberg clothing came with a costume jewelry accessory. The jewelry was so popular that eventually the clothing was discontinued. Eisenberg & Sons was highly regarded in the 1930s and 1940s and famous for its authentic-looking replicas of fine 18th-century jewelry. It was also known for the use of Swarovski crystals and colored stones, the attention to detail, and Art Deco designs such as rhinestone-studded bows.

Elsa Schiaparelli started as a fashion designer but also made costume jewelry and took it to the cutting edge of fashion with its high quality and outrageous designs and colors. She designed chunky suites with molded iridescent stones (called watermelons) and aurora borealis rhinestones (developed by Swarovski in 1955). A masterpiece of design, the watermelons, also known as Vitrail Medium, are huge and juicy and look quite regal atop rich, golden settings.

Gustavo Trifari, an Italian immigrant, found his jewelry company in 1910. His costume jewelry was designed to look like fine jewelry. During the 1930s and 1940s, his “diamante” jewelry was the most sought after style with the pieces looking lie diamonds and other precious gems set in metals than resembled gold, platinum or silver. Early Art Deco designs were geometric; later designs were more ornate, such as floral sprays. 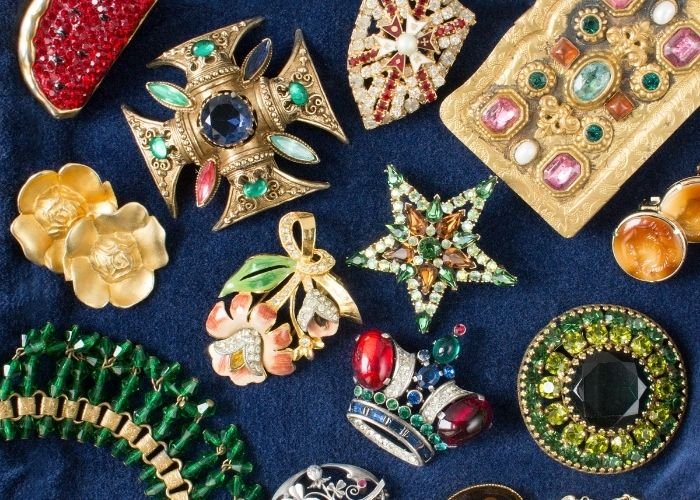 You can find vintage rhinestone jewelry in beautiful condition at second-hand stores, specialty boutiques, yard sales and flea markets. The following points of interest will help you shop more successfully.

The original rhinestones were discovered as small quartz crystals in the Rhine River centuries ago; today, man-made rhinestones are a significant part of popular culture.

Picture Liberace without rhinestones. Better yet, picture Elvis, who wore rhinestones right from the beginning of his career. Robert Redford was decked out in rhinestones as Sonny Steele, rodeo rider, in The Electric Horseman in the 1970s. Michael Jackson wore his iconic white rhinestone glove right into the 21st century. Glen Campbell was the Rhinestone Cowboy, and Sylvester Stallone and Dolly Parton starred in the movie, Rhinestone. Toyota's "Deco Prius" was launched in 2009 decorated with rhinestones, and the COVID-19 pandemic resulted in rhinestone-studded face masks.

The most famous (or infamous depending on your point of view) use of rhinestones was the dress worn by Marilyn Monroe when she sang her personalized version of Happy Birthday to President John F. Kennedy.

Make your own sparkly memories with the vintage rhinestone jewelry available on Etsy and eBay.

What is your favorite color of rhinestone? Let us know in the comments!