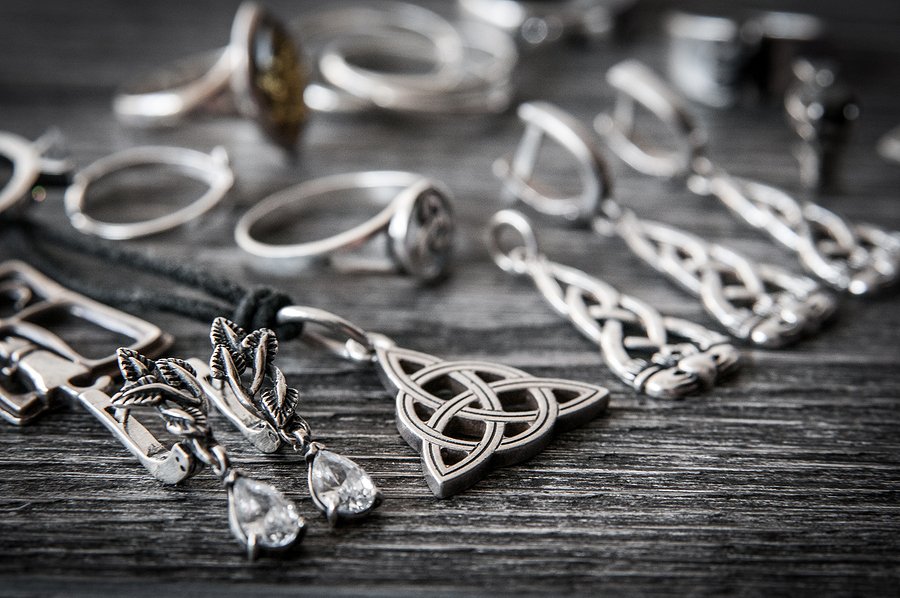 If you are looking for vintage Ola Gorie jewelry, then you have come to the right place. Here you will learn about the history, materials, most collectible pieces, and where to buy.

Ola Gorie is one of the founders of the modern craft movement in Scotland, as well as one of Great Britain’s leading jewelry designers. Her designs are a brilliantly creative union of ultra modern and ancient traditions.

Ola Gorie was born in 1937 in Kirkwall, Orkney, Scotland.  Her parents were grocers and wine merchants. Ola, however, was drawn to a career in the arts and attended Gray's School of Art in Aberdeen and, in 1960, was the first graduate of its jewelry department. She returned to Kirkwall and was inspired by her native islands and their Norse, Pictish, Scottish and Celtic influences. Her jewelry found quick acceptance locally (three jewelry shops in Kirkwall sold her designs), and by the end of the 1960s, was popular across the United Kingdom. Later, she opened her own shop and gained international recognition.

Ola’s designs broke new ground and influenced a generation of designers. Her jewelry comprised clean, sculptural pieces with the subtle highlighting of brilliant sterling silver, and 9- or 18-karat gold. She used the “lost wax casting” method, a technique developed by early Celts, and finished by hand.

The islands of Orkney that are Ola’s inspiration have a magical landscape and evidence of a rich and varied history with folklore that has been handed down through the ages. Monuments and standing stones dating back to Neolithic times and the natural world of seaweed, thistles and pearls are all seen in her collections. In addition, the islands have been a hub of international trade and travel so that Ola’s designs reflect fashion developments from around the world while always maintaining customary meticulous craftsmanship and high quality associated with the British.

Ola retired in 1997, and her daughter, Ingrid Tait, an internationally recognized designer, continues to run the business, although a much scaled down model, where her ancestors’ grocery and wine business stood since 1859.

Since 2007, Ola’s jewelry can only be bought in her shops, via a catalog, or from the website. Ingrid ceased all distribution to third-party vendors.

In 2010, the Orkney Museum held a retrospective exhibition, “Celebrating 50 Years of Ola Gorie,” with her early and iconic designs, original drawings, her tools and some of the ancient artifacts that inspired her.

In 2012, Ola was awarded an Honorary Degree by Robert Gordon University, the first Scottish jeweler to be so recognized. 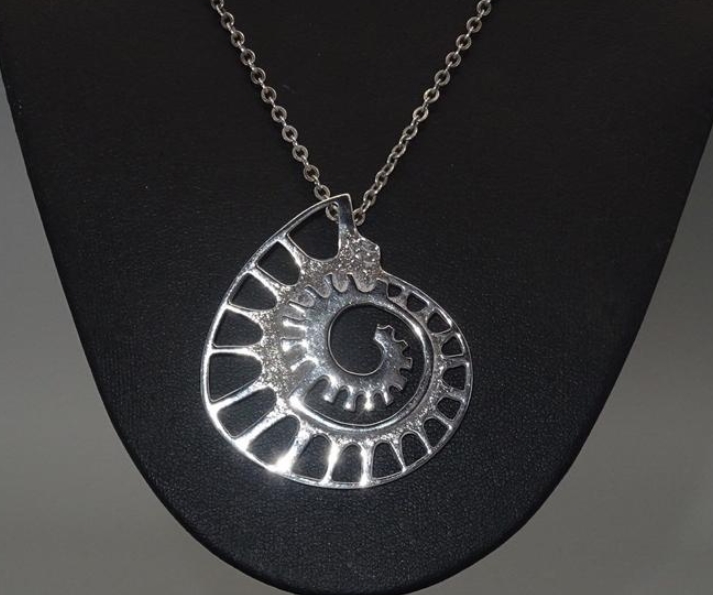 1960s. Handmade silver necklace in a Celtic design, the nautilus shell that is considered “sacred geometry,” a shape that is found all over nature: the galaxy, hurricanes, sunflower seeds, spine cones, etc. 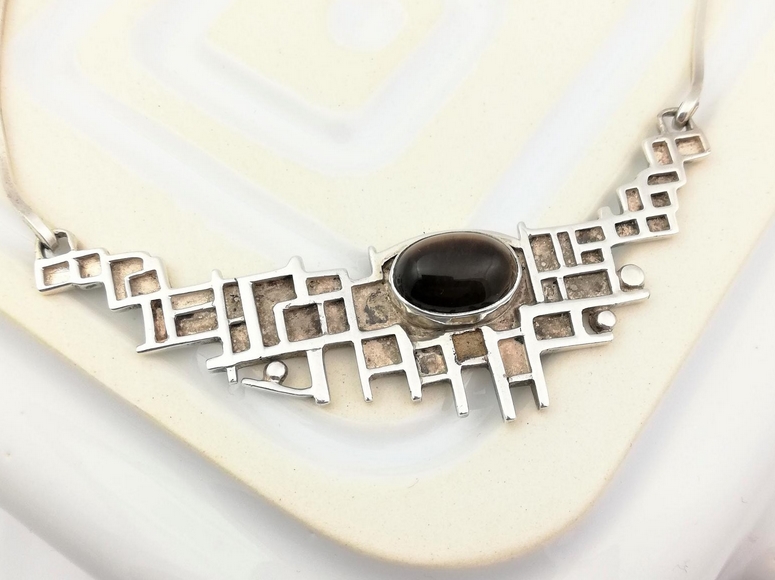 1970s. Handcrafted sterling silver necklace with a central stone that is a real or glass tiger’s eye. It measures 16 inches long. Brutalism was popular in mid-20th century as an architectural style. It was deliberately plain and austere, somewhat crude, sometimes seen as menacing. 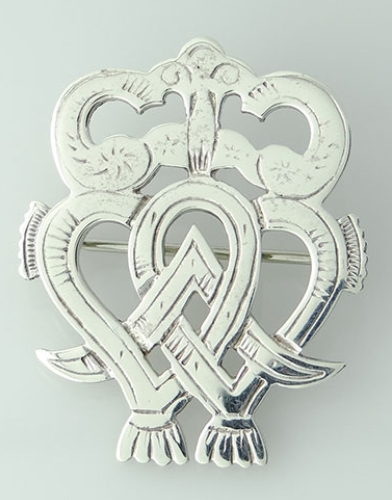 1960s – 1990s, made during the “OMG” period. The sterling silver brooch or pendant is the Luckenbooth, a romantic Scottish symbol of love, dating from the 17th century. It is given as a token of betrothal, affection, and friendship and is very similar to the Irish Claddagh. Measures 1.3 inches by 1 inch. 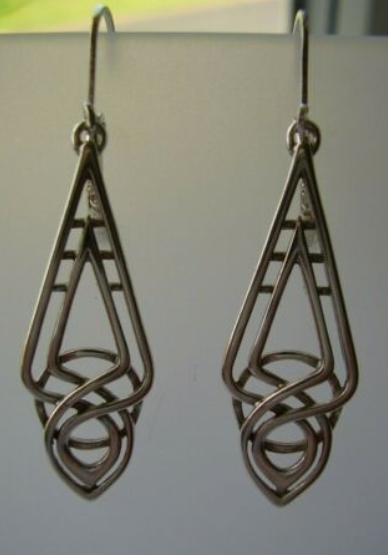 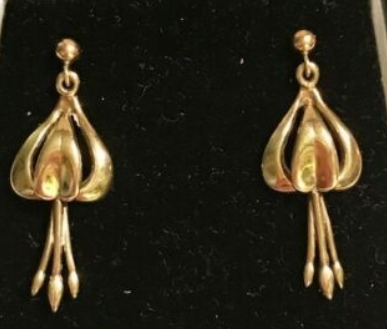 Vintage. These rare Art Nouveau-style gold drop earrings are stunning re-creations of tiger lilies. They are for pierced ears and have a butterfly fastenings. 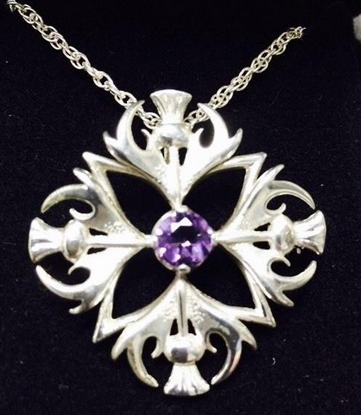 1960s – 1990s, made during the “OMG” period. The thistle is sacred in Scottish folklore and is the country’s national emblem. The legend is that a Viking preparing to attack during the night stepped on a thistle and yelled out in pain, alerting the Scots who could then defend themselves.

Ola Gorie jewelry is filled with meaning as well as the masterful craftsmanship and artistry. It really is jewelry to cherish beyond its monetary value. Please see the collections on Etsy and eBay.