It was the sad end of an era when Lia Sophia Jewelry closed for business in 2015.

Lia Sophia was part of the Remington electric shaver and moustache trimmer conglomerate owned by Victor Kiam. After Victor’s death, his son Tory and wife Elena Kiam took over the brand, re-vamping and incorporating it under the Lia Sophia brand name in 2004.

Lia Sophia was a direct sales jewelry company with independent representatives like Tupperware and Avon. Its mission was to empower women to manage their own careers and achieve their dreams - and it was run largely as a non-profit operation, with substantial rewards going to its all-female sales team. The jewelry was sold through at-home parties by what were then called Lia Sophia ‘hostesses’ or ‘advisors.’ At the time, customers could choose from everyday pieces for less than $20 up to more formal, red-carpet pieces ranging from $110 to $1650. Lia Sophia represented the democratization of jewelry, as anyone from a Hollywood A-lister to a stay-at-home mom could afford to look amazing.

Their collections included reasonably priced, attractive gold- and silver-plated pieces, many with gemstones, and their jewelry became popular all over the U.S. including in Hollywood. Lia Sophia was spotted hanging round some famous necks and wrists in the early 2000s, including Katy Perry, Tyra Banks, Jennifer Lawrence and Eva Longoria. Teen Vogue, People Magazine, and Marie Claire often included Lia Sophia in their influential editorial articles.

Lia Sophia made costume necklaces, earrings, rings, bracelets, cuffs and bangles in modern and even Art Deco inspired designs. Many of their pieces show bubble, circle and triangle designs with dramatic, multi-color or contrasting colors such as a combination of black and red. Their pieces are highly wearable and are now sought-after collectible items.

If you are looking for vintage Lia Sophia jewelry, then you have come to the right place. Here you will learn about the history, materials, jewelry marks, our favorite collectible pieces and where to buy them.

1979 – Victor Kiam purchases the Remington company, and it begins turning profit after years of losing millions. His commercials in which he stars – “I liked the shaver so much I bought the company” - are hugely successful.

1986 – Victor buys Act II Jewelry and changes its name to Lady Remington. He establishes a Lifetime Replacement Guarantee for the jewelry.

2001 – Victor passes away. His son, Tory Kiam takes the reigns of the jewelry business, revamping its image and product line to appeal to younger, trendier customers.

2004 - The company is relaunched under the name Lia Sophia, after his two daughters. Tory and his wife, Elena, a Harvard educated architect and designer, give the company a more modern look, setting up a direct sales operation for stay-at-home moms and women looking to start their own businesses and further their careers.

Elena is the Creative Director and style genius behind the brand. She calls Lia Sophia “social fashion” where women get to experiment with jewelry in a judgment-free zone where they can feel confident and beautiful in the company of their closest girlfriends.”

The line’s popularity appeals to both Hollywood and Middle America, which is not an easy accomplishment.

Lia Sophia jewelry is not branded, so you will not find a stamp or mark. When purchased, it comes with a Lia Sophia tag as identification, but as the tag is generally taken off before wearing the jewelry, the brand’s typical design and look must serve as authentication. Some pieces still have tags, which is preferable for authentication.

Now is the time to start collecting vintage Lia Sophia jewelry. There has been a return to the retro 80s look, and Lia Sophia’s long necklaces, cuff bracelets and cocktail rings are a great way to start your collection. You will find several online sources, but we favor Etsy’s amazing selection.

A rare find. This is a purple faux pearl necklace with a detachable enhancer, so you can wear it with or without. The Lia Sophia name is on both the necklace and the enhancer to verify authenticity: 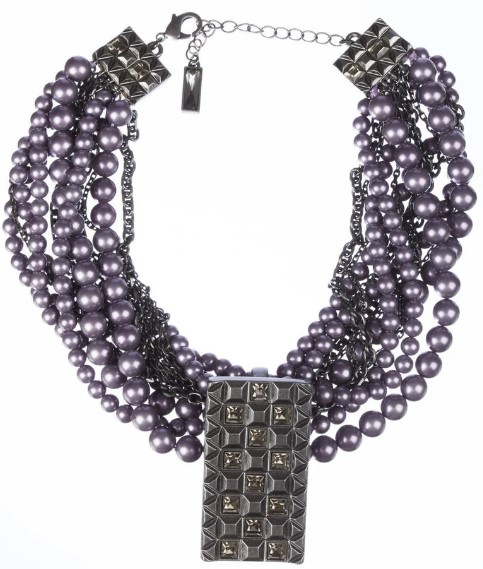 These Lia Sophia estate necklaces typify their distinctive look. They feature long silver and gold tone and abalone shell hoop necklaces. The silver tone and abalone hoops necklace measures 16” with a 3” extension chain, and the e gold tone abalone disc necklace measures 16” long with a 3” extension chain and a 1 1/2” abalone disc pendant. What makes this a good buy is that these necklaces have a Lia Sophia hangtag which makes them authentic pieces: 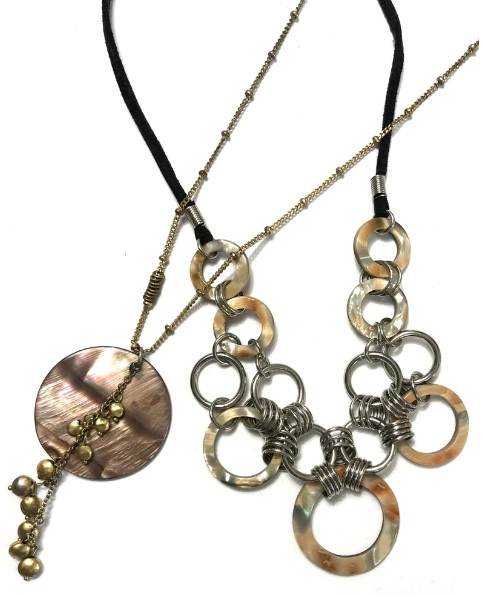 Also typical of the Lia Sophia look is this matching red and blue chunky earring and necklace set on a rubber cord. It’s funky, modern and fun: 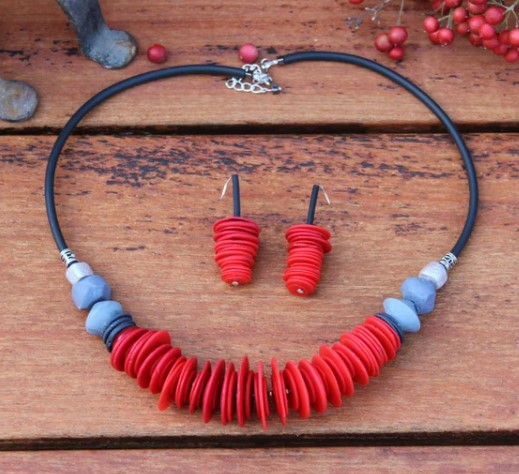 Statement Red Necklace and Earrings from GlArtJewelry on Etsy

No Lia Sophia collection is complete without one of their cuff bracelets. This one is a rare example of a six-panel stretchy cuff with onyx, rhinestones and chatoyant cat’s eye: 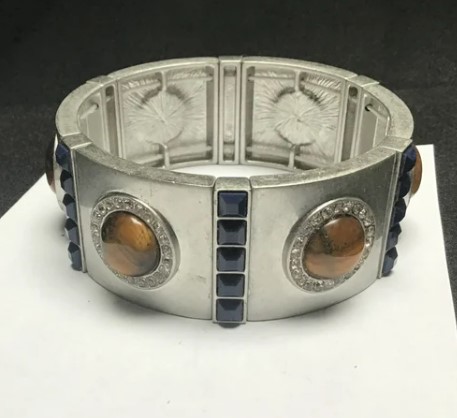 Here’s another extraordinary Lia Sophia hinged vintage cuff bracelet. It’s a limited-edition piece and is made of brilliant yellow, black and cream enamel with rhinestones in a style reminiscent of the Art Deco era: 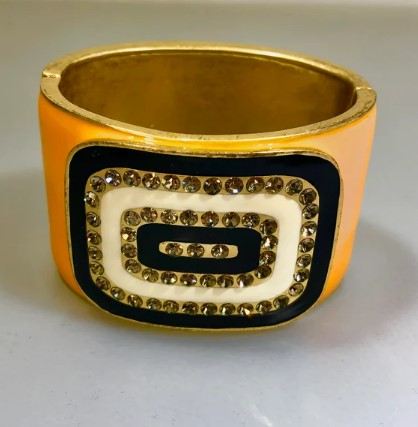 This next piece is a glorious Mid Century modern golden lion face brooch from their Cape Town Collection. It was researched and designed by Elena Kiam herself during one of her many overseas trips: 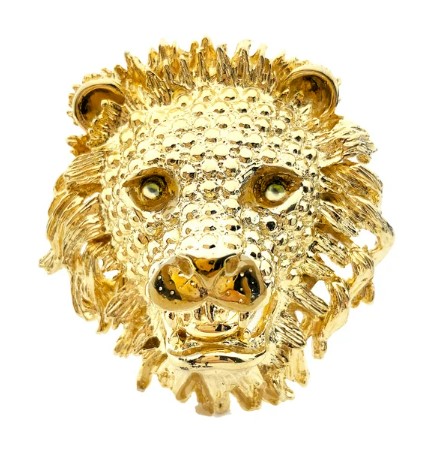 Boho chic. Lia Sophia was famous for its statement cocktail rings – and this one is no exception. It is a gold tone boho/hippie style persimmon orange ring with teardrop, marquis, and round shaped stones. It is rhodium plated to prevent tarnish: 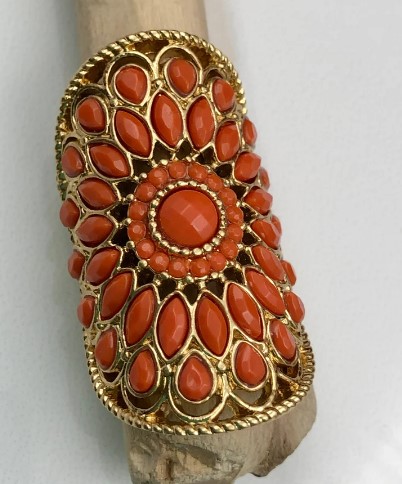 These Lia Sophia gold tone carved hoop earrings scream the 80s. Pair them with flared jeans and a boho top and you’re in a cool time warp: 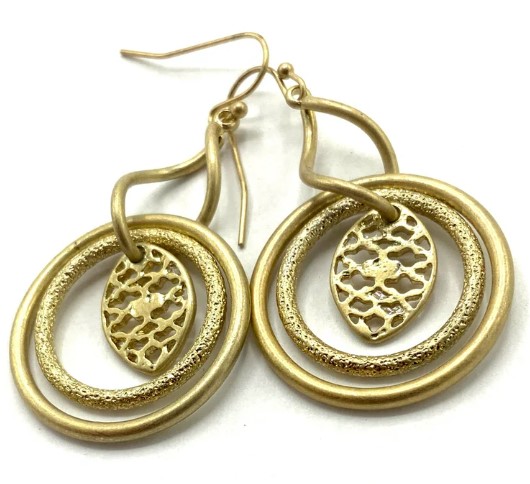 Finally we’ve picked a set of Lia Sophia multi-colored crystal earrings because – well…. they’re so Lia Sophia. The different colored crystals in blue, green and white complement a white summer suit or blue jeans alike – or pick up any of the colors in the earrings to announce your vintage style with pizzazz. 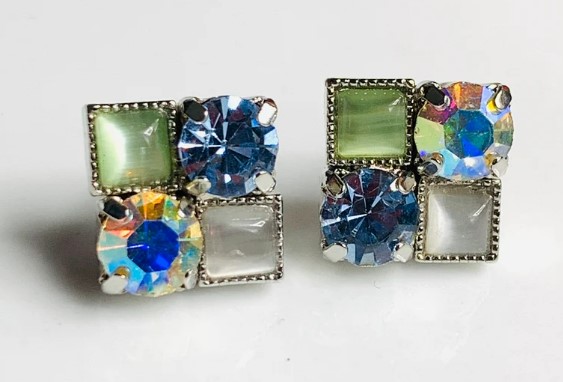 These are some of our favorite Lia Sophia looks. They are as stylish and affordable now as they were back in their heyday.