If you are looking for vintage James Avery jewelry, then you have come to the right place. Here you will learn about the history, materials, most collectible pieces, and where to buy.

James Avery Jewelry is high quality and meticulously crafted in sterling silver, gold and gemstones with unique, meaningful designs cherished by customers across this country.

James Avery was born in Milwaukee, Wisconsin, on December 7, 1921, and was raised in the Chicago area. Pearl Harbor was bombed on his 20th birthday, and he joined the Army Air Force shortly after. He was stationed at Lackland Air Force Base in San Antonio, Texas, thus beginning his lifelong love of the Texas Hill Country.

After serving proudly in World War II, flying 44 missions over Germany, he earned a degree in Industrial Design from the University of Illinois and went on to teach at the University of Iowa and the University of Colorado. At Colorado, he became interested in applying his designing skills to jewelry and created some “just for fun” pieces in his free time.

In 1954, a confluence of events changed the course of James’s life. He returned to the Christian religion of his youth; he stopped teaching; and he spent the summer at his in-laws’ house in Kerrville, Texas. What did not change was his fascination with jewelry making. He set up shop in his in-laws’ two-car garage with a small work bench, a few tools, scraps of silver and copper, a book How to Make Modern Jewelry, and $250 in working capital. Outside of the garage, he hung his sign, "James Avery Craftsman," with the candelabra logo that remains a hallmark of the jewelry still.

He wanted his jewelry to have meaning, both for him and his customers—items that had lasting value. He created pieces that reflected his Christian beliefs, such as crosses, fish, angels, doves, and sold them on consignment in church gift shops and local boutiques. He worked in silver to keep the pieces affordable. His first year in business, James’s sales came to $5,500 (about $53,000 today).

For three years, he worked alone, designing, sawing, polishing, and selling. In 1957, he hired Fred Garcia to work with him, and he issued his first catalog with 39 handmade items. His business continued to grow, and in 1965, he made “James Avery Craftsman, Inc.” official and not long after, bought 20 acres in Kerrville, not far from the garage, to build the company’s headquarters. Fittingly, the first retail store was established in Kerrville. By the 1970s, he employed 35 people and generated $400,000 in sales (more than $2 ½ million today).

James Avery Jewelry is meticulously crafted in sterling silver, 14K and 18K yellow and white gold, and gemstones. The designs honor the things that are important in life and are, therefore, timeless with a universal appeal. James never wanted to produce anything complicated, faddish or “cute.” And to this day, the company never has.

In 1987, the Archdiocese of San Antonio commissioned James to make four vessels for Pope John II to use at Mass while he was visiting the city.

James’s business grew to include 5 manufacturing plants, 80 retail stores, and 3,500 employees. The 1,100 designs are created by the skilled artisans in the Texas Hill Country. The pieces are also sold on the company’s website and in Dillard’s, an apparel, cosmetics, and home-furnishing retailer in the southwest, southeast, and mid-west regions of the United States.

In 2007, James retired (though he continued to design) and his son Chris became CEO/President and his son Paul Director of James Avery Craftsman and Executive Vice President.

In late 2014, the company opened up a showroom/museum next to its headquarters. The displays include James’s earliest designs as well as his original work bench and tools.

In 2017, the company began a relationship with Whataburger, a Texas-based fast food franchise known for its burgers. They honored their Texan roots with a James Avery charm with the Whataburger logo on it. The charm sold out in one day. In 2018, they released a charm of the Whataburger cup. And in 2019, a charm of French fries. The charms are real treasures to collectors.

In 2019, Chris retired and, for the first time, a non-family member was CEO, John McCullough. John had been part of the company family for 14 years in increasingly responsible positions. Chris had no qualms handing over the reins to him. Chris is Chairman of the Board, and James’s granddaughter, Lindsey Avery Tognietti, is Manager of Strategic Initiatives. 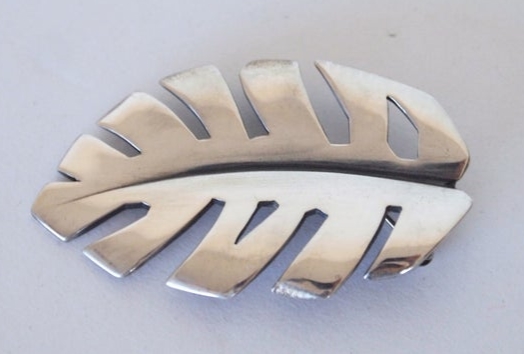 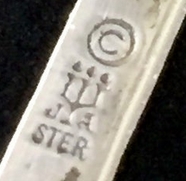 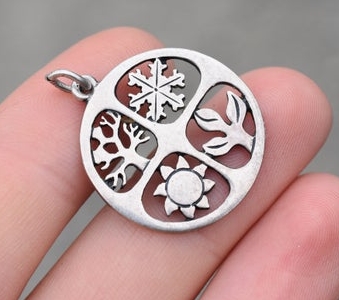 1970s. Sterling silver charm, angel with hands folded in prayer, ¾ inch. Includes jump ring to wear on a bracelet or as a pendant.

1960s. Sterling silver necklace (16 ½ inches) with ichthus, an early and secret symbol of Christianity, and a musical note (1 inch long).

Keep your eye out for retired charms, such as:

Even with all the retired designs, the market is not flooded with vintage James Avery jewelry. It could be that pieces become family heirlooms and get passed from generation to generation. Even so, it is worth the hunt! James Avery pages on Etsy have a generous selection. Ebay has a huge selection of James Avery charms.