The name "Harry Winston" is synonymous with the most luxurious and exclusive jewelry. There is scarcely a red carpet walked by the glitterati that does not include “jewels by Harry Winston.” If you are wanting to add this luxurious designer to your vintage collection, you have come to the right place. Here you will learn all you need to know about vintage Harry Winston jewelry.

Harry Winston’s parents emigrated from Ukraine in 1890, and his father opened a small jewelry repair shop in Manhattan. Harry was born six years later, and he learned about jewelry at his father’s knee—literally. Harry’s mother died when he was seven, and the family moved to California and opened a shop in Hollywood. Legend has it that 12-year-old Harry bought a ring from a junk tray in a pawnshop for 25 cents. He recognized that the stone was a two-carat emerald and sold it two days later for $800.

After Harry graduated high school in 1914, the family moved back to Manhattan. When he was 19, Harry used $2,000 of his savings to open the Premier Diamond Company for buying and selling on the New York Diamond Exchange. He was very well regarded for such a young man, and in only two years, his company had assets of $30,000 in cash and stocks, all of which were stolen by an employee.

Undeterred, Harry began purchasing jewelry from estate sales, mostly precious gems that were in out-of-date settings. He set the stones (sometimes re-cut them) in new, cutting edge settings and sold them for a huge profit. As he became more successful (and wealthier), he bought collections of jewelry for millions of dollars. In 1930, he gained national fame when one of his collections included a 39-carat emerald-cut diamond.

In 1932, Harry closed Premier Diamond Company and opened Harry Winston, Inc. He wanted to design, manufacture and sell his own jewelry. His approach was unconventional; he allowed the gemstones to determine the design. He preferred exquisite, minimalist, timeless settings. Harry Winston, Inc. was one of the most prestigious jewelry companies in the world with some of the most beautiful gems, settings and finished pieces. He was given credit for keeping the New York Diamond industry afloat during the Depression.

Harry was also a pioneer in using platinum to have the diamonds to appear as if they are floating in their settings. He was adamant that nothing should detract from a diamond's natural brilliance and invented the iconic split-prong setting.

In addition to being a designer and merchant, Harry became a collector. Among his collection is the famous Hope Diamond; Catherine the Great’s 337-carat sapphire; and the Star of the East, a 94-carat sapphire.

He died in 1978, and his wife Edna took control of the company. She died eight years later, and the company was then left to their sons, Ronald and Bruce, who fought bitterly over the company for many years. The whole story of the brothers would rival the drama, intrigue, duplicity and downright craziness seen on Dallas or Dynasty in their heyday. Bottom line, in 2000, Ronald and his new partner, Fenway Partners, bought out Bruce for $54 million.

In 2013, the Swiss Swatch Group bought Harry Winston, Inc., and Nayla Hayek, daughter of the late founder of the Swatch Group, is now CEO. 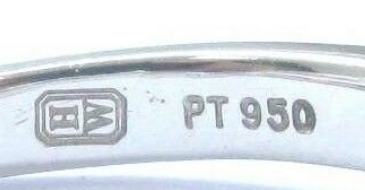 It seems as though “materials” does not quite express the wondrous precious gems that Harry used to create his exquisite jewelry. He used gold and platinum, but he was mostly about the gems, so finally concentrated on platinum because it allowed the gem to take center stage.

Some of the most precious gems that Harry used as raw material:

Any of Harry Winston's jewels will be highly collectible and hold their value for years to come.

Some of his most famous collections include:

Here are some examples of Harry Winston jewelry available online.

There are many online retailers who are passing off fakes as the real thing. Here are a few things you can do to avoid being duped.

Do you own any Harry Winston jewerly? If you have any questions, please leave them in the comments below and I will do my best to help you out!