Want Vintage Gianni Versace Jewelry? Learn about history, marks, materials, collectible pieces, and where to buy in this buying guide.

A Brief History of Gianni Versace

Of course, Gianni Versace also created fashion jewelry to complete the look of his clothing designs. Fashion fans were not surprised as clothing items were already decorated with jewelry like embellishments including chain straps, huge buttons, and pins.

Today, there is also Versace fine jewelry crafted in precious metals and stones.

Like all in-demand fashion designers, Gianni Versace capitalized on his name by developing perfumes and moving into the housewares market.

Born in Reggio di Calabria, Italy, Versace grew up in a household where design was important. His mother was a dressmaker. Later, once he graduated high school, he worked at his mother’s side to learn all the tricks of the trade.

In 1972, he felt it was time to freelance his skills. Moving to Milan, he worked for other brands including Callaghan, Complice, and Genny. By 1978, with his own brand in place, he invited his sister Donatella, and brother Santo to work with him.

Gianna Versace created bold, super glamorous, and theatrical fashion jewelry that was at its best in the 1980s and 1990s. Logo branding was big business, and many pieces incorporate this theme. The designs blend classical and modern design. Today, the style and motifs remain prevalent in the Versace fine jewelry collections.

When Gianni Versace picked a logo for his company, he selected Medusa, from Greek mythology. Legend has it that before she was cursed Medusa was so beautiful it was hard to look away. Afterwards, she was a woman with a head full of snakes, who turned those who looked upon her to stone. Yet, Medusa remained fascinating.

Initially, the logo only had the name Gianni Versace. Then, in 1993, the Medusa head became the symbol for the brand. You will see it incorporated into many of the designer’s fashion jewelry pieces.

Versace who grew up in the Calabria region of southern Italy was deeply influenced by the ancient archeological ruins. One ancient Greek pattern he liked was the Greek Key.

The Greek Key is a band of lines interconnected both horizontally and vertically to form a repetitive pattern. It can be simple or intricate. For the ancient Greeks, it symbolized both unity and infinity. The Greek Key gave Versace the inspiration to form his own symbol which he called La Greca. This he incorporates playfully into his fashion jewelry items.

The designer’s love of Baroque art is also apparent. The term “ baroque” means irregularly or odd in shaped. It referred to 18th century art and was meant as a derogatory term. This backlash was against this fresh style of art that ignored the classical Renaissance style. Baroque style in Italy was produced between 1590-1680 and the art patrons were churches. This involved both architecture, interiors designs, sculpture, and paintings.

Baroque art and architecture are highly intricate and curvaceous with a heavy use of yellow gold. The designer included this swirl effect in many of his patterns. Gold toned metals were the preferred metals of all Gianni Versace jewelry, although some silver tone is also used.

Versace also loved the bold colors of Pop art from artists such as Andy Warhol. These primary colors became part of his collections. He even incorporated some of Warhol’s screen prints into his designs.

Like Andy Warhol, who Versace admired, the designer had success using everyday objects in  his work. This was a theme for all Pop art artists.

One of the most famous dressers he ever created was worn by Hugh Grant’s then girlfriend for the opening launch party for Four Weddings and a Funeral, in 1994. The little-known actress Elizabeth Hurley wore Versace’s black sleeveless dress, with large slashes up the side, held together by decorative yellow gold safety pins.

Both the dress and the actress became an overnight sensation. Afterwards, the simple everyday object known as a safety pin became a regular motif in his work. Safety pin jewelry from Gianni Versace are highly collectable pieces.

Growing up along the Mediterranean Sea, Versace loved going to the beach. Sea creatures became frequent motifs in his designs. 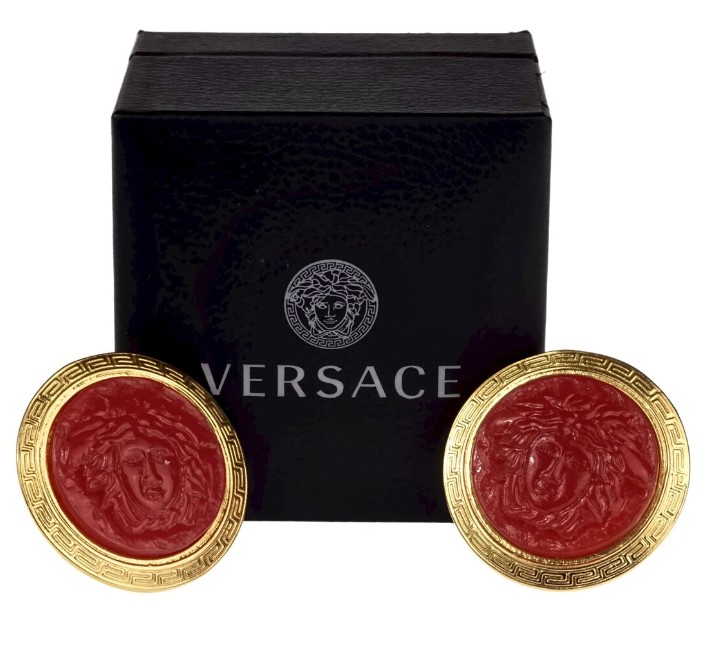 Many of Gianni Versace’s earrings from the 1980s and 1990s are clip on to support the heavy weight of the large designs. Vintage earrings include button styles. Think Medusa medallions, or ancient Roman lion head medallions, encircled by a rope design. Occasionally, you will find some pretty floral motif clips, made with colored enamel.

Look for playful starfish clip on earrings, with colored cabochon cut glass stones. Others have tiny dots of clear rhinestones.

Hoops are always popular, and you will find many varieties on the market. Think gold plated hoops, with interconnecting Medusa medallions and sturdy latch backs.

Drop earrings also incorporate the Medusa medallion, with other Medusa motifs hanging below. As a dazzling add on, some earrings are embossed with rhinestones and elongated rhinestone fringes. Some Medusa medallions in a drop style earring contain dangling safety pins, with hanging Medusa heads. 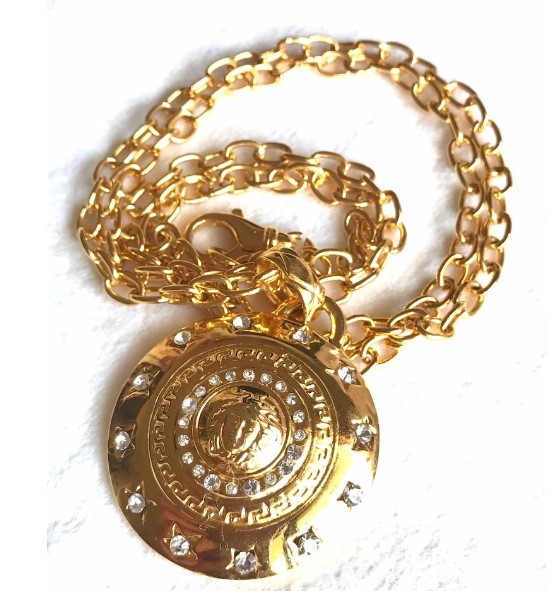 Single Medusa medallions make their way onto necklaces. Interlocking gold shells form sea inspired neck pieces. Other necklaces that capture the imagination include silver toned chokers. Many are fastened together with a series of rectangles, with the word VERSACE cut out to reveal the skin of the neck. Snakes wreath around as Gothic embellishment.

Bib necklaces from the 1990s prompted the designer to send his models on the runway in simple suit jackets without shirts. The entire neckline was filled in with the opulent jewelry. Bib necklaces almost resemble breast plates, made from metals pieced together including medallions, beads, and cylinders, along with glass beads for sparkle. 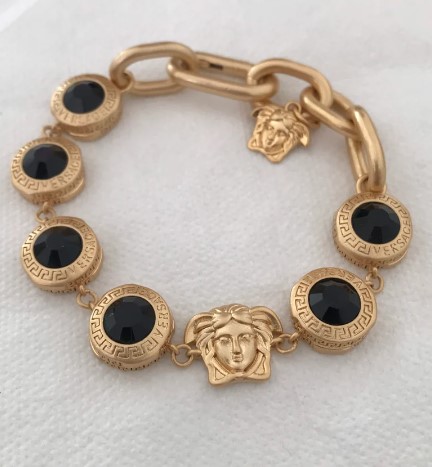 Linked bracelets proclaim the word VERSACE in bold large letters. Medusa heads are often linked together to encircle the wrist, with or without rhinestones. Another motif is the golden sunshine.

Some are slimmer chains with one large medallion drop. Large cuff style bracelets also make a bold impact. Some bracelets were constructed on adjustable leather bands and feature the La Greca symbol halfway around. Others are braided bands with a variety of charms. 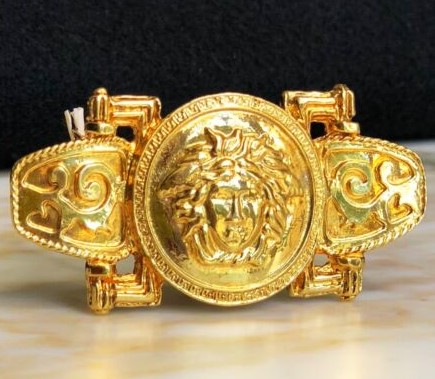 The 1980s and 1990s brought back the brooch. Gianni Versace brooches added even more detailing to embellish his fashions. Medusa pins were abundantly popular and come in lavish varieties. Some have a circular medallion in the center, with a swirling Baroque style shield on either side.

Flower brooches take a contemporary spin, weaving like the hair of Medusa to create petals. 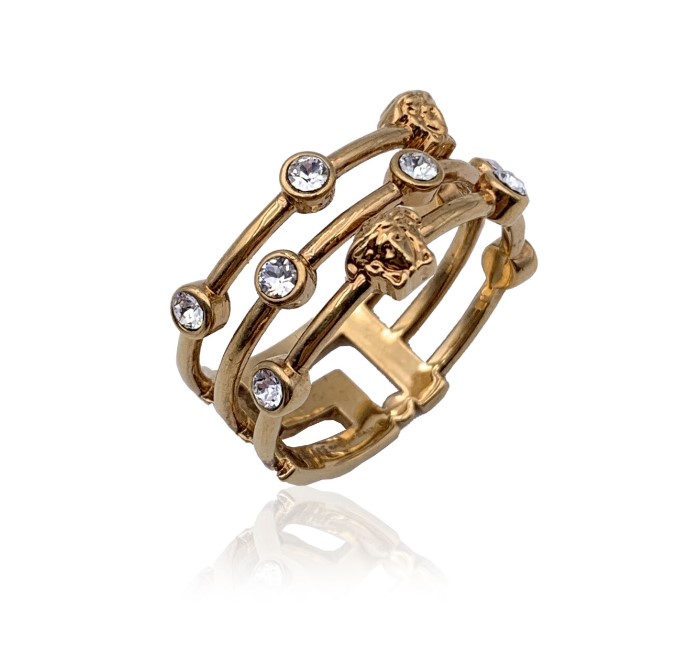 Large cocktail rings dominate the vintage Versace marketplace. These bold statement pieces are perfect for an evening on the town. Glass bobbles set in gold are huge. Always popular are the Medusa medallions.

The Greek Key Meander ring is a band available in various widths. The continuous design wraps the fingers. Some rings in this style are outlined with glimmering rhinestones. Buy more than one and wear them together to really draw attention to your hands. 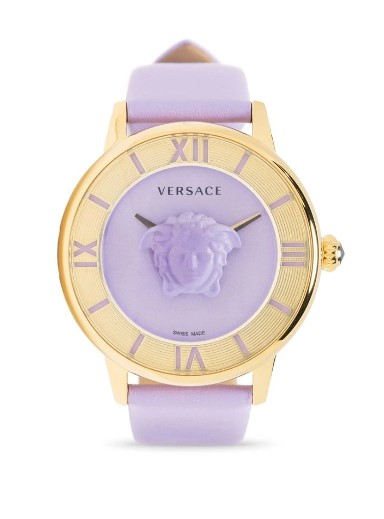 There are a variety of interesting Gianni Versace watches for sale online. The Gianni Versace Green Gold Signature Medusa wristwatch for women has a lime green face, with a signature gold Medusa sitting at 12 o’clock. The yellow gold bezel is engraved with the Greek key symbol. It is all set against a Hunter green leather band.

On other watches, the Medusa golden head dominates the entire face of the watch. Leather bands are embellished with the golden Greek Key symbol.

Many of the Gianni Versace vintage fashion jewelry items on the market today include an original poach, box, info booklet or original case. Look for the mark Gianni Versace or GIANNI VERSACE embedded in the jewelry. Both will have MADE IN ITALY underneath.

Vintage Gianni Versace jewelry is available online through vendors on Etsy and eBay. Remember to carefully inspect pieces before purchasing online, by checking the photographs and the conditions report.