Coral is an “organic gemstone” and, like pearls and amber, is created from living matter rather than minerals. It is made out of calcium carbonate that’s secreted by the polyps that grow in colonies on top of each other, for generations and generation, to make a massive structure, such as a reef. Coral is cherished for its distinct warm colors and smooth, satiny texture. When crafted into beautiful jewelry, coral is as stunning as any gemstone.

Red coral is the most valuable form of coral. The deeper the red, the more it is prized. Coral colors range from bright to dark red, to slightly orange-red, to pink, to black, blue and white. 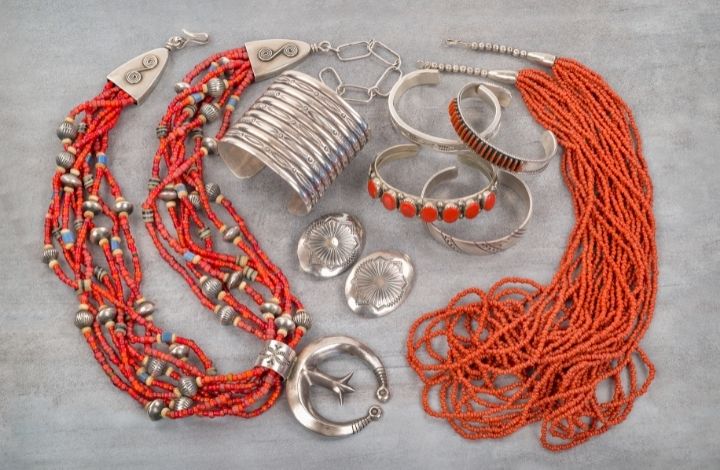 Want vintage coral jewelry? Learn the history and what designers used this soft and beautiful material. Add some coral to your collection.

Our early ancestors, from as far back as 25,000 years, appreciated the beauty of coral and used it for decoration and medicinal and spiritual purposes. Its relative softness made it easy for prehistoric people to carve and shape it and polish it to a beautiful sheen.

Civilizations located near shallow water (especially along the coasts of Morocco, Corsica and Algeria) or those with established trade routes first created coral jewelry. The oldest known finding of red coral dates back to the Mesopotamian civilization about 3000 BCE. Coral was also found in ancient Egyptian and European burial sites. Coral was prized for its supernatural benefits, to guard against accidents and protect from black magic, evil spirits, witchcraft and the devil himself in ancient times. Those beliefs spread to Ancient Greece and Rome. Romans hung branches of coral around the necks of their children to protect them from all dangers. The Gauls from Iron Age Europe adorned their swords, shields and helmets with coral for protection in battle.

In Renaissance paintings, the Christ Child is depicted holding or wearing amulets of coral. Throughout the 1800s and early 1900s, the Italians were known for their elaborate coral carvings. Their styles and techniques found their way to the US, and in the late 1800s, Tiffany began using coral in their jewelry. Coral was especially popular during the Victorian Age. Babies from wealthy families had teething rings made of coral, which speaks to its softness. In the 1900s, it was fashionable to combine coral with large diamonds.

Coral is as much a part of Native American jewelry as turquoise is. Since they were mostly land-bound cultures, we can assume they were introduced to coral by the 16th-century Spaniards who sold and traded coral. Early in the 19th Century, the Navajo named coral one of the eighteen sacred objects.

Coral is becoming rare due to pollution, over-harvesting, and climate change. In 1969, 180 countries joined an international trade agreement to restrict the export of coral, and activists continue to tighten the restrictions. Some species of coral are on the endangered list.

In 2002, Tiffany and other jewelers stopped using natural coral. Other jewelers are using repurposed coral from vintage pieces. With fewer jewelers using coral, the reefs have a chance to recover. Until then, there are beautiful vintage coral jewelry pieces to enjoy—and to collect. Vintage pieces are bringing astronomical prices at auction.

Frederick Boucheron started the French family dynasty of jewelers in 1858 with the opening of his first store in Paris. After Frederick’s death in 1902, his descendants brought a more global approach, opening shops all over the world, until the family business was acquired by a series of conglomerates, including the Gucci Group. Along with his meticulous craftsmanship and unerring eye for the aesthetically pleasing, Frederic is credited with introducing jewelry with both precious and semi-precious stones, and sometimes a “found” material, such as the coral, diamond and wood.

Hattie Carnegie (nee Henrietta Kanengeiser) arrived in the US from Austria in 1889. She worked in fashion at Macy’s until she and a friend opened a shop, with Hattie making hats and her friend making clothing. When they began producing costume jewelry to go with their fashions in 1939, it was wildly successful all on its own. Hattie’s jewelry was bold and distinctive to give her rather conservative fashions some “pizzazz.”

Louis-Francois Cartier began as an apprentice watchmaker in Paris. He bought the business in 1847 from his employer, and the Cartier name went on to become  synonymous with luxury and elegance. Cartier ladybugs were introduced in 1935 and immediately became the “in” collectible of the day. It was handcrafted in solid gold. The body was carved from natural pink salmon coral and bezel set with six European round brilliant diamonds. The ladybug has been a symbol of good luck from time immemorial.

Jerry DeNicola opened his jewelry line in 1957 in New York City. His pieces rivaled the “real thing,” and he named his first line the “Real Look,” which leaned heavily toward marine flora and fauna. His jewelry was exquisite and his gilt ornaments and semiprecious stones competed successfully with expensive fine jewelry. In 1970, the company became part of Capri Jewelry, and the DeNicola trademark no longer used. Such a brief time makes a DeNicola piece highly collectible, but rare and difficult to find. But worth the search if you are lucky enough to find your own DeNicola.

Kenneth Jay Lane was born in 1932 in Detroit, Michigan. He studied at the Rhode Island School of Design and went to New York City to design jewelry for Hattie Carnegie and then designed shoes for Dior, Blass and Norell, eventually combining his talents and designing bejeweled shoes. When he designed jewelry to coordinate with the shoes, celebrities and socialites went wild over it. He launched his jewelry business in 1963, creating costume jewelry as well crafted and exquisitely designed as fine jewelry.

Bernard Passman discovered his talent for carving on his way home from the Philippines at the end of World War II. He worked in main stream careers until his success allowed him to move his family to the Cayman Islands. There, he discovered black coral, which, when carved and polished, has an elegant beauty that belongs with solid gold and precious stones. He gifted Lady Diana and Prince Charles with sterling silver and black coral tableware, a black coral horse and corgi dogs for Queen Elizabeth and Prince Philip, and a gold and black coral crucifix for the Pope.

He died in 2007 and his galleries closed, making his pieces even more collectible.

The jewelry industry has damaged the world’s coral reefs over hundreds of years. Fewer jewelers today use coral so that the reefs will recover. In the meantime, there are beautiful vintage coral jewelry pieces that are worth many times their original cost. The main thing to be aware of is that the piece you buy is real coral. You will find that even jewelry designers of note used coral-colored beads, glass and “faux coral.”

How to Test for Real Coral

If you travel, be aware of where the best quality of coral is: southern Ireland, Bay of Biscay, Canary Islands, Japan, Hawaii, Australia, Mediterranean and Red Seas. Torre del Greco, Italy (near Naples), is known to have the best quality coral jewelry in the world. We are not saying “Yea” or “Nay” to that, but merely mentioning it for your consideration. Closer to home, you can browse the Internet for coral jewelry collections, for example, on Etsy and eBay.