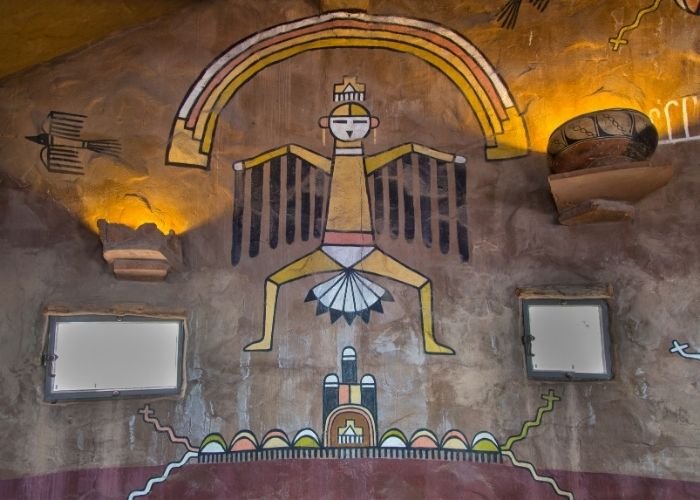 Charles Loloma was many things: a Hopi priest, world traveler, potter, weaver and self-taught silversmith. He became a highly influential jeweler. He popularized the use of gold and gemstones not previously used in Hopi jewelry.

Charles Loloma was born in 1921 in Arizona. He began his artistic career as a muralist and painter at Phoenix Indian High School, He assisted in the reproduction of murals from the Hopi reservation for New York City’s Museum of Modern Art. He later worked on murals in the Federal Building for the the Golden Gate International Exposition in 1939.

Charles served in the US Army during World War II and later attended Alfred University's School for American Craftsmen in Alfred, New York, on the GI Bill. He learned how to make stronger mixes of clay and modern methods of forming and firing pieces. He earned a Certificate in Pottery and, in 1954, opened a pottery shop in Scottsdale, Arizona, where he sold his line of pottery called Lolomaware.

In 1955, he began dabbling in creating jewelry and eventually this new art form became his passion. Ironically, his first efforts were rejected from Native American exhibitions, as not being “Indian enough.” Granted, some of his designs were inspired by cultures from around the world, although he never left behind his own traditions. Noteworthy are his Hopi interpretations of Egyptian deities. He also used materials that were unusual, such as gold, diamonds, ivory and wood. He also explored different techniques for jewelry making, such as tufa casting (tufa is compressed volcanic ash with a unique texture), a labor-intensive process. He also developed the technique of using gems of various heights as inlay (as high as an inch and a half) and included gems on the inside of his pieces, unseen when the pieces were worn. He wanted to honor the inner beauty of the wearer.

In 1963, his jewelry became internationally known and coveted due to an exhibition in Paris. Mamie Eisenhower, wife of the former president, and President Lyndon B. Johnson were among the many to commission pieces. His superb designs led to an artist residency in Japan and a commission for the Queen of Denmark.

In 1974, he won first prize in the Scottsdale National Indian Art Exhibition and continued to win for the six following years.

Some of Charles’s jewelry reflect the Hopi landscape in miniature topographies where gems and woods provide lustrous, flat surfaces contrasted with jagged shapes. Some reflect the skyscrapers in Manhattan. Likewise, his pieces summon up both the earthbound and heavenly, the Stone Age and the Space Age. During his last decade, he used Mikimoto pearls, diamonds and exotic woods he collected on trips through Southeast Asia and the Pacific.

In 1986, an auto accident greatly affected Charles’s health and, despite periods of recovery, eventually led to his death at age 69.

Charles Loloma only used one mark, it is a stylized version of his last name: 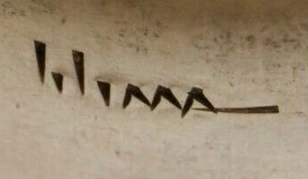 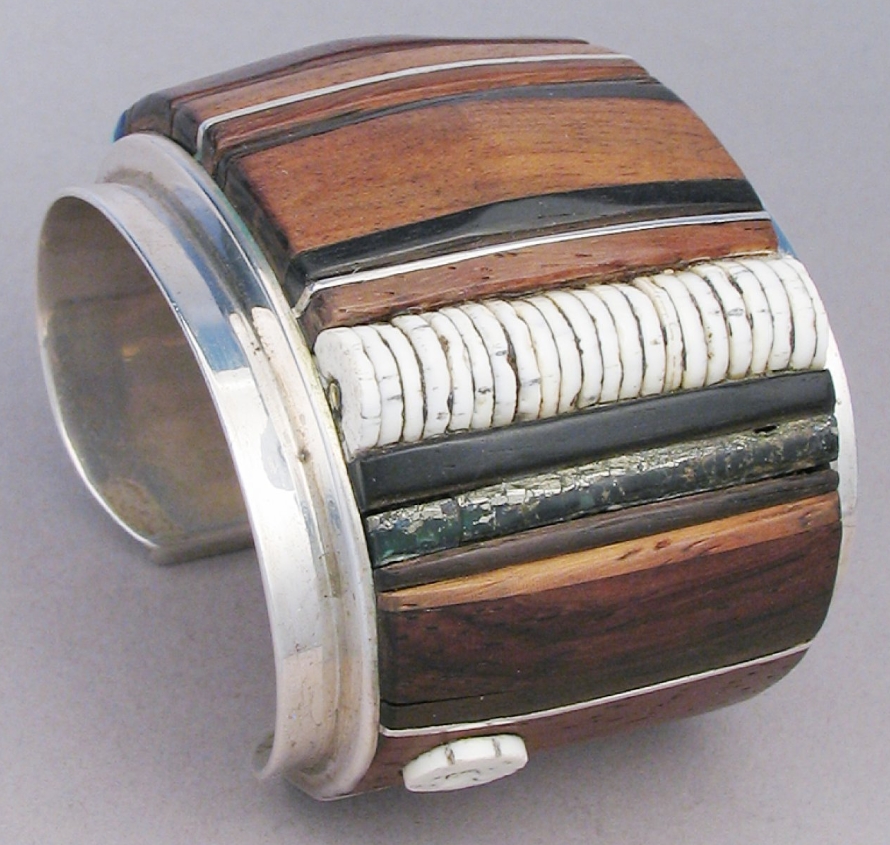 1960s. This is a modern Hopi silver cuff-style bracelet with height inlay. The hollow silver cuff is unadorned along its edges and features a wide channel of stone and height inlay down the center in ironwood, ostrich shell beads, turquoise and ivory. 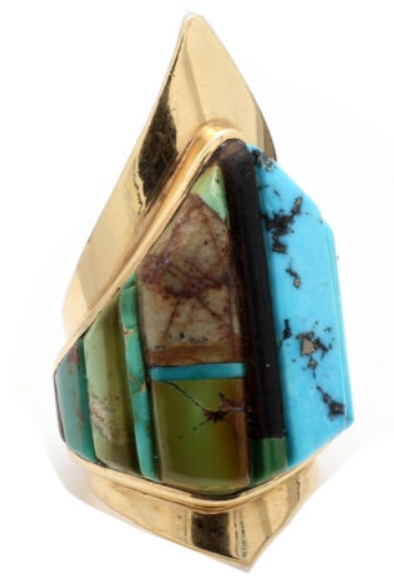 Estate. This is a rare find. A shield ring fashioned in 14K gold with an inlay of different kinds of rare turquoise and coral. 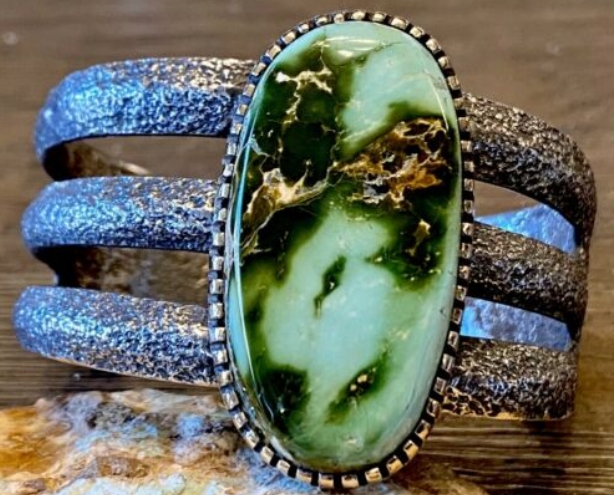 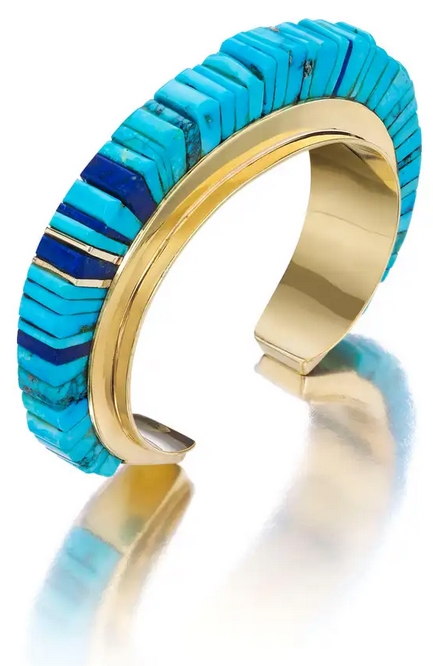 1960s-1970s. This bracelet, designed as a stacked series of varied-width turquoise, 4 lapis lazuli segments, and 2 18K gold rectangles, curves around the wrist. The design evokes traditional bead strands that are wrapped around the arm. While the turquoise is a nod to traditional native culture, the treatment shows an understanding of modern jewelry. 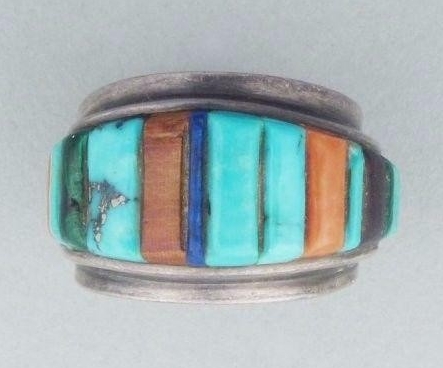 You can find a decent selection Charles Loloma jewelry on eBay. Have a look and see if something catches your eye!