Wondering what is better? We cover everything you need to know about the differences and similarities of platinum vs. white gold in vintage jewelry.

Platinum and white gold had very different origins. Scientists determined that platinum ore came from outer space via a colossal meteorite shower upon Earth about four billion years ago. White gold, on the other hand, was invented in 1915 by a German chemist, but garnered little notice until it was patented in the U.S. in 1920 as a lesser-priced alternative to the very expensive platinum.

History of Platinum and White Gold in Jewelry

Unlike other precious metals, platinum was not used for jewelry until the 18th century due to its scarcity and the difficulty of working with it. Advances in technology remedied the latter condition, and platinum jewelry was quite popular during the time of King Louis XVI who declared it “the only metal fit for kings.” By the late 19th – early 20th centuries, platinum was the setting for diamonds and other precious gems. Also, its amazing strength allowed jewelers to create the durable, delicate and intricate lace-like designs of filigree, as well as soft and elegant milgraining.

Platinum jewelry was the hallmark of Edwardian Era (1901-1910) with skillfully wrought and brilliantly designed garlands, ribbons, bows, tassels with a lightness and airiness never before achieved. In 1912, the already great demand for platinum jewelry increased. Due to the tragic sinking of the Titanic, “mourning jewelry” came into vogue. With black and white being the mourning colors of that time, the jewelry was fashioned from onyx and platinum.  Edwardian rings are typically the second most popularly bought vintage engagement rings today.

The production of platinum jewelry came to an abrupt halt only two years later, with the start of World War I in July 1914. All available platinum resources were needed for the manufacture of weaponry. By the time the war ended and the Art Deco (1920-1940) style flourished in the design of jewelry, platinum had competition—white gold.

White gold is an amalgam of yellow gold and one or more white metals, such as nickel, palladium or manganese, coated with rhodium. It had come onto the scene, quietly at first, and was then welcomed into the jewelry industry. White metals were the rage of the Art Deco period for their cool modern sheen that embodied the opulence and elegance of the Roaring Twenties.

Both platinum and white gold had a seat at the table to display the diamonds, emeralds, sapphires and rubies and the geometric designs favored by the ladies, particularly the flappers. The wealthy had platinum, the common folk had white gold, everyone was able to celebrate, via their jewelry, the confident, free-thinking woman that came out of the circumstances of the war.

And then, another war, another ban on the use of platinum for anything other than war materiel and another chance for white gold, the “understudy,” to usurp the role of the “star,” platinum.

White gold was popular enough during the 1920s and 1930s, but during World War II, advances in the production and use of white gold adversely affected the demand for platinum when it was available again after the war. In fact, platinum did not return to its former illustrious status until the 1990s, where it remains today. 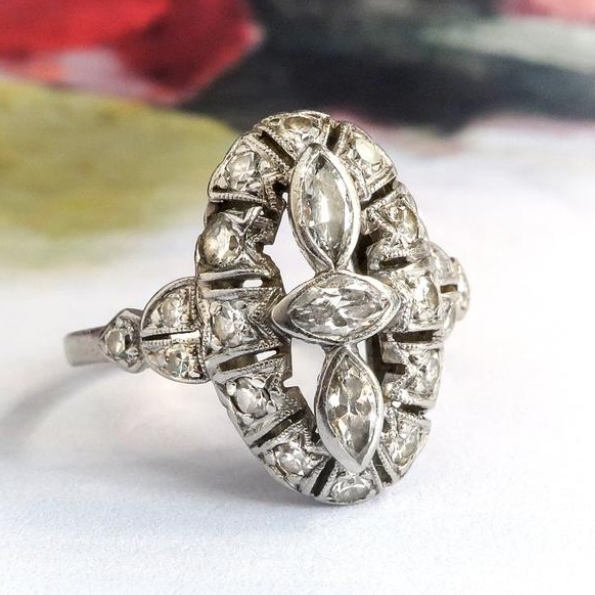 Platinum, undeniably, is a status symbol, and why wouldn’t it be? It is among the finest, purest and rarest of precious metals. It was a tough act for white gold to follow.

The natural icy white luster remains luminous forever, unlike white gold’s tendency to tarnish or discolor due to the alloys used. Those alloys, particularly nickel, also are responsible for the allergic reactions that many have to white gold, while platinum, in its purity, is hypoallergenic. Also, the pure white color of platinum works like magic on off-color diamonds, making them appear amazingly whiter.

Platinum is the strongest, most durable, densest (20% denser than white gold) and heaviest (60% heavier than white gold) of metals. Its strength keeps prongs from wearing and protects those precious stones from falling out. Platinum is unlikely to bend or dent. The thing is that not everyone wants to wear such heavy jewelry; those people prefer the lighter weight of white gold.

White gold has other advantages. It’s less expensive, as we’ve alluded to, because it is immensely more available than platinum. If we could gather together all the platinum ever mined, it would fill an average-sized living room. All the mined gold would fill 2 ½ Olympic-sized swimming pools! Also, being less strong, dense and heavy than platinum, makes white gold easier to work with, and that counts down on labor costs.

When choosing white gold, a consumer is often able to purchase a larger precious gem, particularly a larger diamond for an engagement ring. White gold is also less expensive to repair. For instance, suppose you need to have a ring resized, it will cost twice as much for a platinum ring.

Vintage Buying Tip: If you find 18K white gold that predates 1940, it is much less likely to yellow than later white gold, because there were more white alloys added at that time. Say you find an engagement ring from the 1920s or 1930s (the Art Deco period), you will have a ring that looks like platinum at a far more reasonable price. Art Deco is the most popular vintage style for engagement rings.

The Following video does a great job of breaking down the differences between Platinum and White Gold:

Due to its many industrial uses, gold has been the investment of choice for many governments and wealthy individuals. It’s an investment that can take advantage of future price increases and performs well as a defense against inflation and protects economic catastrophes.

Platinum, however, is becoming a more attractive investment due to the law of supply and demand. As we know, platinum ore is scarce, but the demand has increased and predictions are that it will continue to increase. When the economy is not doing well, platinum is.

The choice between white gold and platinum is a personal choice based on preference and style. They both look identical to the naked eye, with one costing significantly less than the other.

The biggest difference to consider between platinum and white gold is the durability. If you want a ring or piece of jewelry to last you for generations, platinum is the best choice as it will hold up very well over time. If you can afford it, platinum is worth the cost. If you are on a limited budget, and don't mind that your jewelry will wear over time, you can opt for white gold.

When purchasing vintage jewelry in either white gold or platinum, I recommend going with what you love in a price point you can afford. You will find a large selection of both metals in the vintage world. Edwardian jewelry will most often be made of platinum, whereas Art Deco jewelry will be either or both.

Vintage jewelry is considerably higher quality than modern jewelry because most of it was handmade, so really, either metal option will provide you with a piece of jewelry worth investing in.

Click here to see extraordinary examples of both platinum and white gold vintage jewelry at “The Best Vintage Jewelry Shops on Etsy.”

What is Milgrain? A Milgrain Buying Guide

What Is Filigree Jewelry? A Buying Guide

What is an Old Mine Cut Diamond?