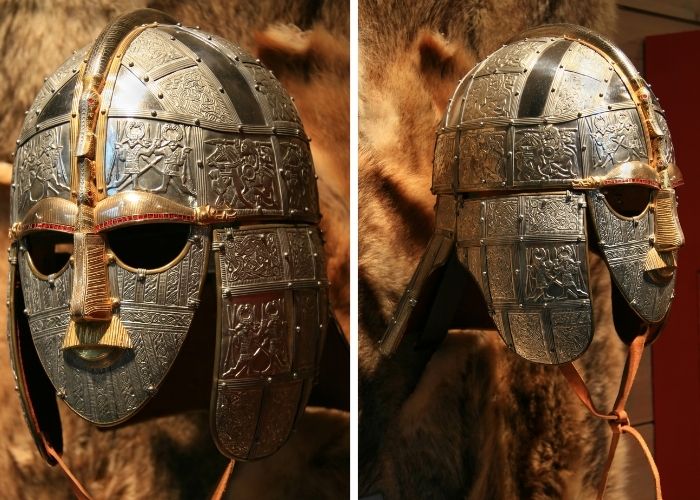 Want to learn about Sutton Hoo jewelry? Learn about pieces found at this historical dig and how it influenced jewelry design.

The discovery of Sutton Hoo and the archeological findings revealed much about the life of the Anglo-Saxons. The decorative art objects found at the site inspired countless jewelry designers, who incorporated not only elements of these artifacts into their works, but styles from the Anglo-Saxon period.

Today the finds from the Sutton Hoo are hoaused in the British Museum, in London, which also sells jewelry creations based on or inspired by the great dig. The Sutton Hoo discovery is having a resurgence through the 2021 Netflix film The Dig, starring Ralph Fiennes and Carrie Mulligan.

Jewelry and Accessories in the Anglo-Saxon Period

Both men and women wore jewelry during the Anglo-Saxon period. Gold was used as a status symbol. People who could afford to wear gold wore plenty of it. Kings gave out gold finger rings, swords, and weaponry to their top supporters. Even the horses were dressed and embellished with gold.

Jewelry crafted in this era is rich in symbols and story telling narratives.

Belt buckles were lavishly decorated and were popular accessories for both sexes. Other pieces popular during the period include cloak clasps and fibulae sets, a kind of brooch used to fasten garments.

Wealthy women wore jewelry, pendants, and amulets around the waist to indicate they were the head of the household.

Simple necklaces and bracelets were crafted from amber or glass beads. More expensive works were made from silver. Gold was reserved for the elite. Necklaces often contained pendants, crosses, and semi-precious stones such as pearls, garnets, and amethysts.

A Brief History of Sutton Hoo

In 1939, landowner Edith Pretty hired amateur archeologist Basil Brown to investigate the earth mounds on her property, located on the Deben estuary, close to Woodbridge, in Suffolk, England.  It was discovered to be a burial mound. The excavation led to the largest archaeological dig in British history.

Inside a ship was revealed measuring 90 feet in length and loaded with precious treasures. Art historians confirmed it was from the early 7th century, during the Anglo-Saxon period, a time before England existed as a nation. After the Roman invasion of Great Britain and the eventual withdrawal, new invaders entered the region including the Angles, Saxons, and Jutes. They formed a group called the Anglo-Saxons and settled mainly in East Anglia, where the Sutton Hoo was found.

To bring the boat to the property, it first was dragged from the river.  Next a trench was dug into the earth and the chamber built to house the ship.

The work and expense signified that the deceased was of great importance, possibly an Anglo-Saxon king. Some historians believe this is the final resting place of King Rædwald of East Anglia. The acidic soil fully decomposed the human remains, so the mystery is unsolved.

In the burial chamber housed at the very bottom of the ship many decorative art objects were found from this Medieval era. Artifacts around the imprint of where the body would have been included an elevated helmet with a human face, an exquisitely patterned golden belt buckle, a sword with a gold and garnet cloisonne pommel and another with intricate garnet cellwork.

Other objects found include silverware, silver bowls and a large platter, all from the Byzantine Empire. Textiles, feasting vessels, hanging bowls, and a large, decorated purse with a few dozen golden coins were also discovered.

Martick Jewellery in London designed a necklace, made from gold plated silver, based on these coins, for the British Museum gift shop. The coin is the pendant, with a small cross dangling down and a garnet bead. Two other beads hang on either side of the coin.

One of the most incredible finds at Sutton Hoo was what is now referred to as the Sutton Hoo Helmet. The helmet is comprised of a domed skull cap, with a sloping neck guard. Deep cheek pieces on hinges were made to be moveable. At the top is an iron crest comprised of a two headed snake, one at the top and one at the bottom, both with garnet eyes.

The facial fittings reveal a flying creature, with the nose as a body, the garnet encrusted eyebrows as wings and the moustache as a tail. The head meets with one face of the snake, and from the side gnashing teeth are revealed. At the end of each eyebrow are the faces of boars, creating two more creatures.

The mask has inspired mini pin badges and cuff links available at the British Museum. The Sutton Hoo Helmet is even the center of a metal keyring featuring Medieval-themed charms, which is exclusive to the museum. The other two charms are the Dunstable Swan and one of the Lewis Chess Kings. 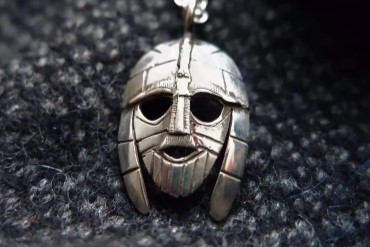 This gold belt buckle, inlayed in niello, or black metal alloy, found at the site, is now housed in the British Museum. Covered in zoomorphic or symbols based on animals, the interlacing, comprised of repetitive knots, spirals and twists is typical of design in medieval art.  Artists in this period used horror vacui - a style in which every space is covered. In Greek the word translates into “fear of empty space”.

The top two round bosses are encircled by two creatures attacking prey. The raised, circular plate between has a snake-like depiction with a tongue protruding at the top. Below the bottom singularly situated boss are attacking birds of prey.

The purse lid was made to cover a leather pouch, which was strapped to the waist in which to hold money. While the leather had already decayed when it was excavated at Sutton Hoo, the plaques that decorated the objects remained. These were made of gold, garnet cloisonné, the ancient technique of binding gemstones to metal, using wire, and decorative millefiori glass. Images contain birds of prey lunging down upon ducks.

Historic Jewellery Reproductions or HJR, in England, now owned by seventh generation goldsmith Mike Shorer. Through commissions the company has designed works for period films, television, and theatre. His father helped to create the jewelry sold at the British Museum, after the artifacts from the Sutton Hoo were originally put on display. HJR Anglo-Saxon works include brooches, rings, earrings, pendants and cufflinks, and works can be custom crafted.

At Master Ark, a company that has been creating Medieval jewelry for more than 30 years, you’ll find decorative disc shaped brooches, in spiral knots and swirls, cast in bronze, silver or stainless steel. Some hold semi-precious stones like amethyst, lapis, and carnelian. The designer also crafts cloak clasps and fibulae sets.

For vintage pieces have a look at Etsy and eBay to purchase pre-loved jewelry inspired by Sutton Hoo, the Anglo-Saxon period and Medieval era.