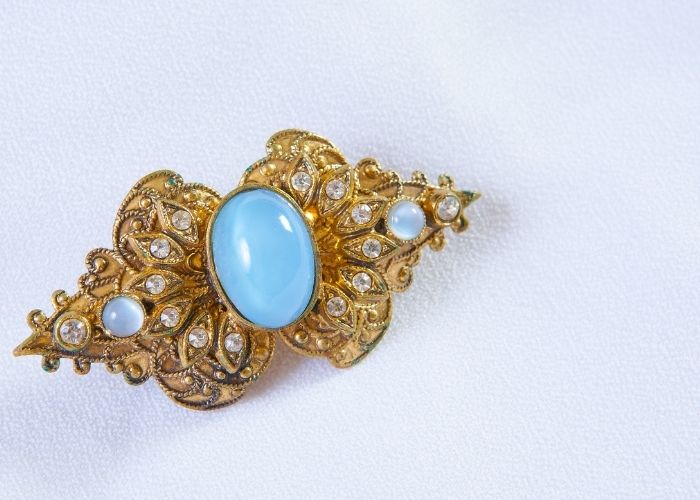 If you are looking to add some vintage Avon jewelry to your collection, you have come to the right place. In this guide you will learn about the history, designers, jewelry marks, materials used, and tips on how to buy.

Avon may be best known for cosmetics and fragrances, but their jewelry, especially that offered from the mid-1970s to the late-1990s, is in great demand by collectors. Pieces created for special collections, such as those designed by Kenneth Jay Lane and Elizabeth Taylor, are hard to find and, therefore, quite valuable.

David H. McConnell founded the California Perfume Company in 1886 with an original and distinctly modern sales plan: ladies going door-to-door selling fragrances and toiletries directly to ladies. Women had the opportunity to establish their own businesses! By the turn of the century, there were 5,000 much admired “Avon Ladies.” Thirty years later, there were 25,000. In 1939, the company became “Avon Products, Inc.” and expanded their products lines, including skin care, talcum powder and vanity sets.

Avon jewelry began in 1963, originally as a free gift for purchasing a particular product or as a premium for buying a certain number of products. The jewelry, characterized by brilliant stones, filigree, and gold leaf, looked like fine jewelry, and it was wildly popular. The demand resulted in Avon’s first collection that customers could buy in 1970. The collection included necklaces, pendants, rings and brooches that held perfume, solid or liquid, a status symbol for the ladies of the 1970s.

By 1975, Avon was the world's largest costume-jewelry producer—for men as well as women. Jewelry representing owls and other animals were popular at the time, as were cameos, bangles, Christmas and Halloween designs, and the ever-romantic hearts. By the 1980s, Avon's reputation for offering high-quality yet affordable costume jewelry began to attract notable designers to the line.

Today, after a complicated series of mergers and acquisitions, Avon is a international conglomerate with sales of more than $10 billion. In 2020, it began its new campaign “Watch Me Now” and introduced a whole new logo. 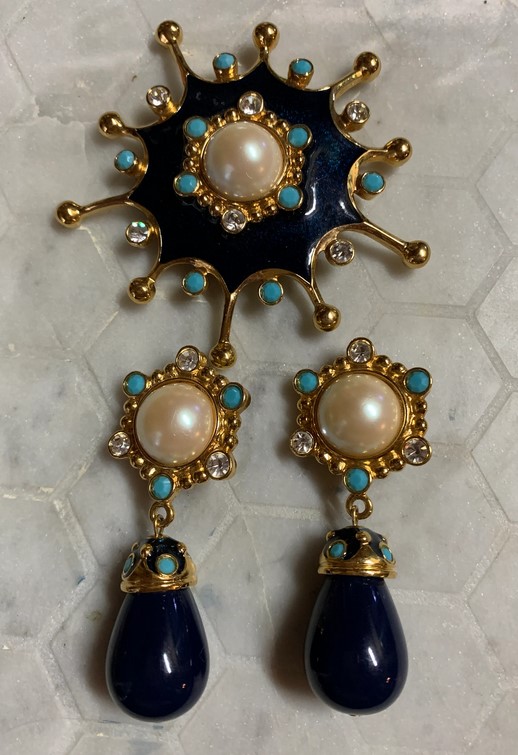 Jose and Maria Barrera collaborated with Avon in the late 1980s-early1990s. Their pieces are some of the most collectible of Avon jewelry. The bold yet often delicate designs translated well to the Avon brand. Collectors will find that vintage Avon Barrera jewelry is worth two to three times the original price. 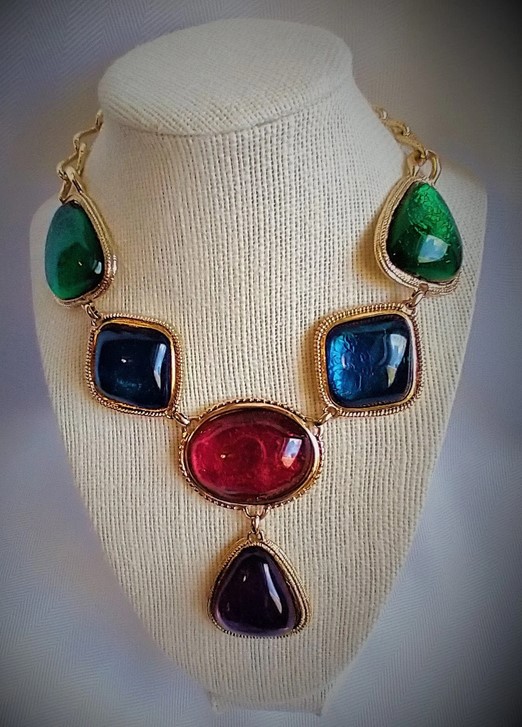 Kenneth Jay Lane’s costume jewelry was in demand by Hollywood celebrities, socialites and royalty. His designs were fun yet sophisticated, and Avon carried his collections longer than any other of their designers. KJL for Avon pieces commanded a higher price than the “ordinary” Avon jewelry, and the same is true today for the vintage collectibles. 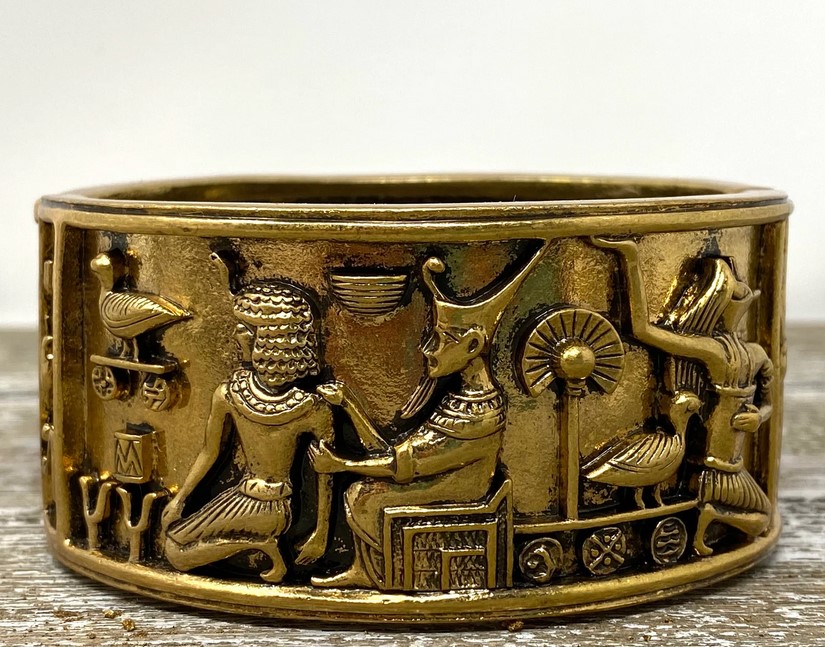 Elizabeth Taylor designed jewelry for Avon from 1993 to 1997. It was the most popular and the most expensive. Her designs are ornately detailed, luxurious and often indistinguishable from fine jewelry. Many pieces were inspired by her films, such as Cleopatra and The Taming of the Shrew. One show piece in particular was the replica of the Shah Jenah necklace gifted to her by Richard Burton. ET jewelry was glamorously wrapped in violet, the color of ET’s eyes. 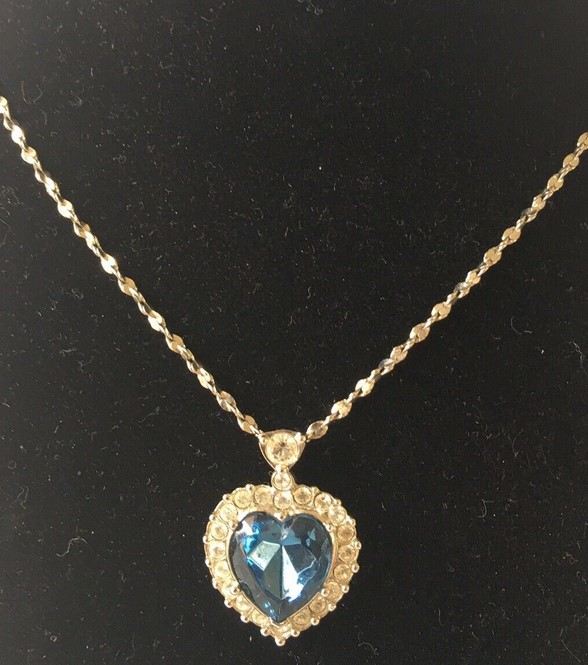 In 1998, Celine Dion worked with Avon to offer a "My Heart Will Go On" necklace based on the jewel Rose wore in Titanic. 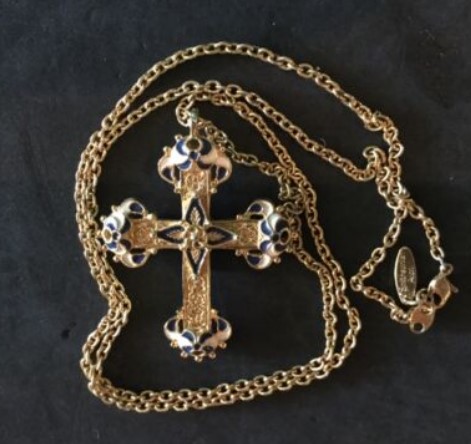 The original cross, 7 inches high, made in the 13th century was gifted to the museum by John Gellatly. The Avon cross, at 2+ inches, was created by designers from Avon and the Smithsonian and signed by both on a metal tag. Crafted in copper and champleve enamel, the cross was highly textured and etched. One side was plain; the other blue and white enamel.

Some initials are merely an internal company code for who manufactured the piece. 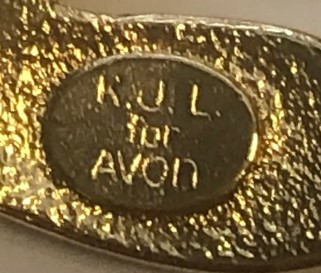 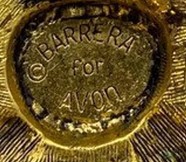 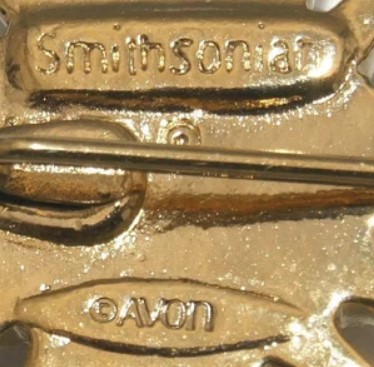 Please note that a Canadian company, Avon of Belleville, made costume jewelry between 1945 and 1971. Those pieces have no connection to “our” Avon.

Here is a link to see all of the Avon marks. 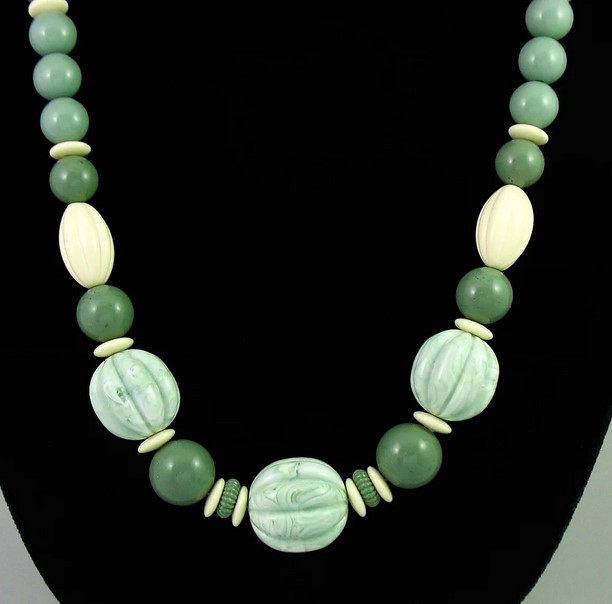 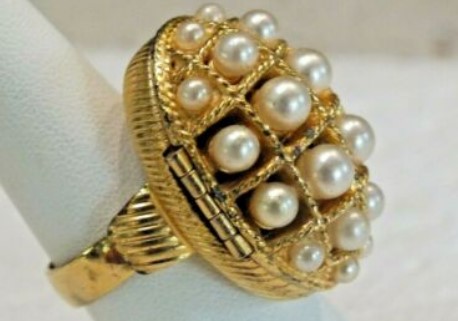 1970s – Art Deco Style statement ring, adjustable so you can wear it on any finger. Notice the hinged front where the perfume is hidden away, yet handy. 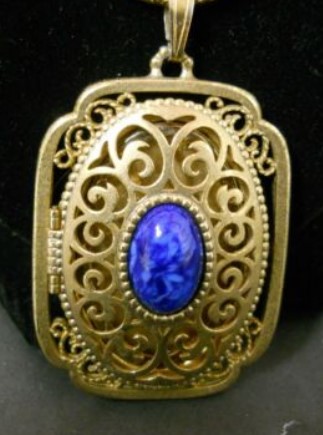 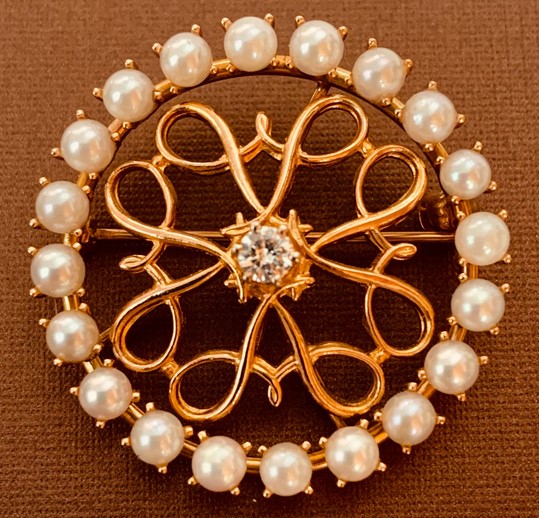 20th century – One of the rare pieces of fine jewelry rendered in 14K gold with 20 uniformly sized pearls and .10 carat brilliant diamond set in the center. This is a once in a lifetime piece for the buyer. 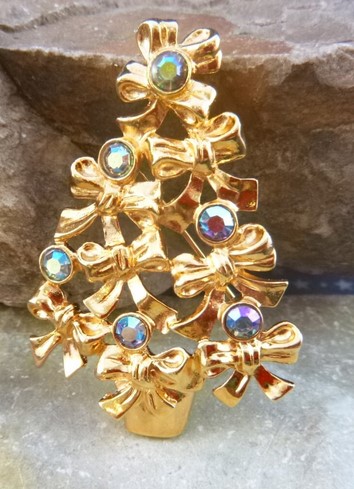 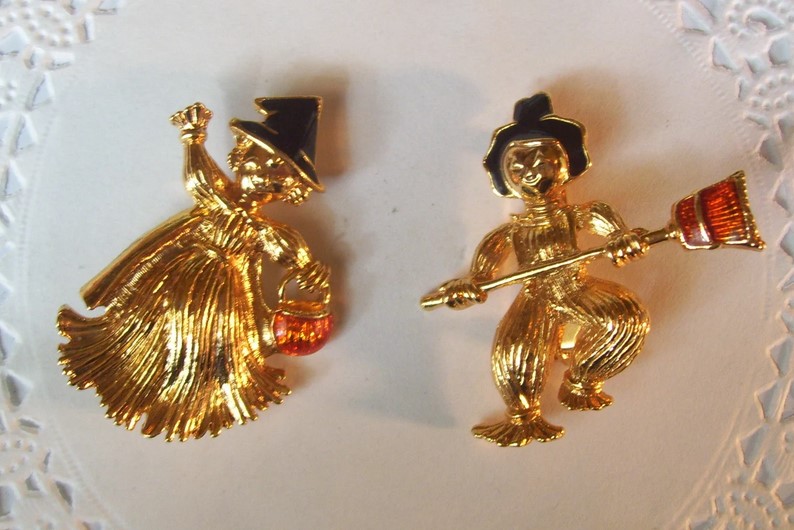 Is Avon Jewelry Worth Anything?

Yes, Avon jewelry is worth something to the people who collect it. Because Avon is a company that has been around for decades, and because they have massive distribution, there is a plethora of vintage jewelry designs available.

The most valuable Avon jewelry includes:

Avon mostly created gold-tone jewelry. There is some Avon jewelry marked with a 14k gold mark, so they did use some real gold, but it is rare.

Most of Avon's vintage jewelry is silver toned and not made with real silver. They do have a section on their current website for sterling silver pieces.

One thing that contributes to the demand for vintage Avon jewelry is that it was limited. The market was never glutted with a particular piece or line. They were regularly discontinued. Another thing is that jewelry was only a small portion of the Avon business. Find a piece from the 1960s, and you have had a very successful hunt!

To see more examples of Avon jewelry, please visit the Avon pages on Etsy and eBay.