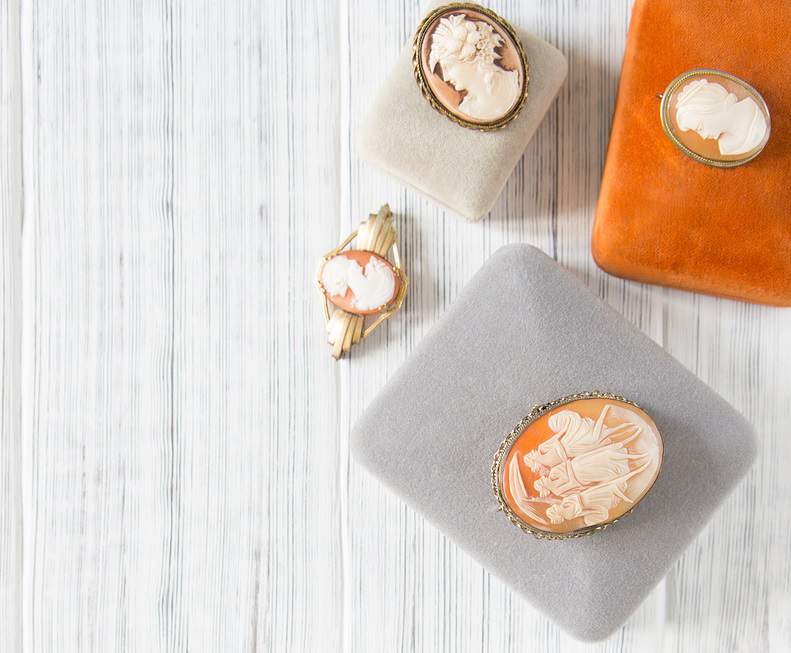 Want to get your hands on Vintage Cameo Rings? Learn about the history, value, the most collectible types, and tips for purchasing. What is a Vintage Cameo Ring?

A cameo is relief carving (a raised positive image that is higher than the background) of a figure or small scene that basically creates a miniature sculpture. These little pieces of art are typically carved into shells, stone, gemstones, coral, lava, mother of pearl and occasionally plastic or glass.

A Vintage Cameo Ring is a cameo that has been set into a ring. Cameos can be fashioned into necklaces, pendants, bracelets and pins. History of the Vintage Cameo Ring

It is thought that cameos get their inspiration from as far back as the 15,000 BC. Here, you will find the use of petroglyphs, figures and symbols carved into rock, to communicate between different peoples and record significant events. This use of carvings was then translated into portable carvings, cameos, that would depict religious, moral and other message.

Early Greeks and Romans used cameos to depict images of their gods and goddesses, mythology and biblical events. Here we see the first use of cameos as a way to showcase beautiful women. During this time period, you will often see earrings and signet rings, as well as some that were mostly just large works of art. You’ll also see some mythological depictions representing love and seduction. Young women would wear these as good luck charms and ways to express desire.

Cameos seemed to take a break in popularity, but were revived again during the early Renaissance and in France with the Neoclassical revival. You can find cameos as coronation crown decorations as well as military accessories such as swords and breastplates. Apparently, Napoleon was so enamored by cameos, that he founded a school to teach the art of cameo carving!

Much like other jewelry trends, Queen Victoria had a hand in making cameos popular. She loved the trend so much so that it eventually led to them being mass produced.

As mentioned, cameos can come in many forms of jewelry. The Vintage Cameo Ring is a beautiful way to showcase a cameo as you often see such ornate mountings.

The rarity of a cameo will determine it's value, not necessarily its age. For example, Renaissance cameos are more valuable than Roman ones because the Romans produced more of them.

The Most Collectible Cameos

As with many other jewelry trends, Vintage Cameo Rings are being reproduced. You’ll want to be sure to follow some of our tips in order to purchase a true Vintage item.

First, you’ll want to try to identify what your cameo is made out of. Try to hold your piece up to get some light to shine through it. If you feel you can see through the material, there is a chance your piece is made of out of shell (which is a good sign). Occasionally, some plastic is thin enough to see through, so this shouldn’t be your only test.

Since these pieces are old, you should be able to see some cracks or crazing. Some items may have been extremely well taken care of and that is where a loupe can come in handy. Even if the items has been well maintained, you should still be able to see some carving marks. These small indentations should help to determine that the cameo was made out of a shell instead of a smooth uniform plastic.

Settings can also help determine the age. Many cameos mounted in brass were from the 1940’s, when they mass produced. If anything is plated, it would be after 1840s. During the 1880s, silver was a popular mounting material. Most quality cameo settings will have a metal marker stamped into the piece.

If you feel your cameo might not be old, try researching the motif online. Often, newer cameos depict the same image, and if you see yours over and over again, chances are it could be a reproduction.

Ask your seller for a guarantee in writing, to ensure a refund if it is not to your liking, or you find the cameo to be not high-quality. Always request a bill of sale that details the item and asserts that the cameo is an authentic, antique hardstone cameo. The name and address of the seller should be included along with a promise of exchange or replacement if the product is found to be problematical. Where to Purchase a Vintage Cameo Ring

Vintage Cameo Rings can be purchased on the internet at sites such as Etsy, Ebay and Rubylane. Vintage Stores and Antique Shows may have some as well. With all methods of purchasing, be sure to use some of our tips above to truly feel confident in purchasing a Vintage item.

Here are a list of some excellent Etsy shops that carry a good collection of items for you to browse through:

How to Take Care of Your Vintage Cameo ring

Like any other Vintage Ring, a Vintage Cameo Ring should be cared for. The cameo is very resilient, which is why these pieces have lasted for so long.

Vintage Cameo Rings are great examples of historical works of art. These beautiful carvings can last many years, if taken care of properly. Hopefully you’ll be able to pass your piece down for many generations to come!

If you have any questions, please don't hestitate to ask, we are glad to help! Leave your questions in the comments below and we will answer!