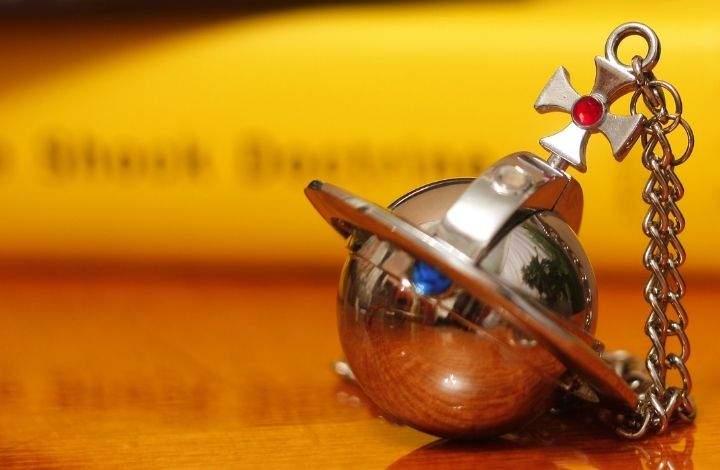 Vivienne Westwood is largely responsible for bringing modern punk and new wave fashions into the mainstream. Her jewelry combines high fashion with tradition British design. It this article we will be talking about vintage Vivienne Westwood Jewelry. If you are a fan of Vivienne Westwood and want to add some of her vintage jewelry to your collection, you have come to the right place.

Vivienne Swire was born in a small village in England in 1941, two weeks after the start of World War II. Her father had been a shoemaker, but he worked in an aircraft factory during the war. Her mother worked in a cotton mill. In 1958, the family moved to Middlesex, close to the Harrow Art School (now the University of Westminster). Vivienne worked in a factory and, for fun, took a course in jewelry making and silversmithing, but left after only one term. There were no artists in her family—what made her think that she could succeed in the art world? Of course, she eventually succeeded beyond her wildest imagination.

She eventually became a primary school teacher, but still created jewelry and sold it on weekends at a street market in London. She married Derek Westwood and they had a son, but Vivienne longed for a more exciting life. Enter Malcolm McLaren and his exciting life! He was manager for the notorious band, the Sex Pistols, who created the British punk movement, and Vivienne became the “Mother of Punk” for her outrageous fashion designs. She first outfitted the band, then sold her fashions and jewelry in a shop she and Malcolm opened that became “Punk Central.” The shop marked the start of Vivienne Westwood Jewelry.

She and Malcolm split up in the mid-1980s, and Vivienne went to Italy to work on a new fashion line with a theme of “taking tradition into the future.” She wanted to combine a royal look with a futuristic touch. It was during this time that she designed her signature emblem.

She used the orb and crown of the British crown jewels and added a satellite ring, like appears around Saturn. The emblem is on everything: labels, garments, buttons, railings and chandeliers in her offices, and perfume bottle stoppers. And it was a favorite design for her jewelry: pendants, necklaces, earrings, bracelets, bangles, brooches and watches. 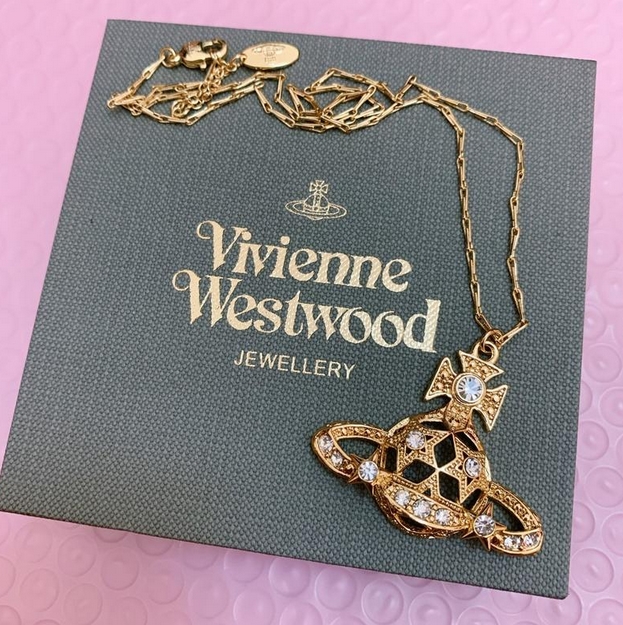 In 2012, Vivienne launched her Gainsborough Palladium Jewelry collection with Mick Jagger’s daughter, Georgia May, as the face of the collection. The pieces are reminiscent of the opulent jewels worn by the aristocratic ladies in Gainsborough's portraits. The pieces also emphasize the lightness and strength of palladium.

Today, Vivienne continues to design fashions and jewelry. She lives in London with her husband and design partner, Andreas Kronthaler. They both are heavily committed to saving our planet.

First and foremost, her hallmark is her custom-designed and immediately recognizable orb. 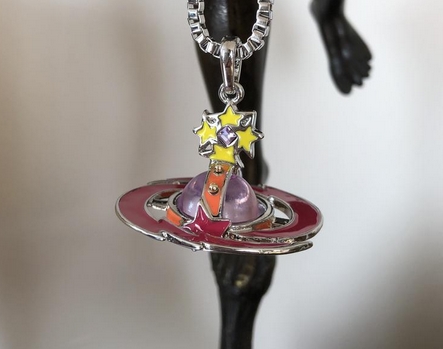 Apparently created during Vivienne’s time in Italy during the 1980s. Fashioned from sterling silver and gold. This large and heavy ring is a simple, though classic, design.

Created in the late 1990s. The orb is made up of colored glass. The chain is silver plated.

Created in the 1990s. The skeletons are bedecked with rhinestones, and all joints move!

All we know is that this was created prior to 2000. This piece is for the guys, but who’s to say!

Vivienne started designing with safety pins as far back as T-shirts for the Sex Pistols. The gold plating over pewter provides a lustrous setting for the multi-faceted white cubic zirconia. The 3D orbs finish off the design.

Just a “heads up” on caring for your VW jewelry. The jewelry is often made from imitation metals and stones to keep it affordable. Store the pieces in air-tight clear plastic bags—never in polyvinyl bags. Use lukewarm water, gentle liquid soap, and a soft tooth brush to keep the pieces clean.

You can get a great overview of VW jewelry on Etsy and on eBay.