Lea Stein is widely known as "the most notable and innovative designer of plastic jewelry of the 20th century.”

If you are looking for vintage Lea Stein jewelry, then you have come to the right place. Here you will learn about the history, materials, our favorite collectible pieces, and where to buy.

Lea Stein was born in France in 1936. Little is known about her early years, except that she was trained as an artist at a young age—training that served her well throughout her life. What is not clear is whether or not she spent part of her childhood in a Nazi concentration camp.

Lea married chemist Fernand Steinberger in the 1950s and began her career working in the fashion industry in 1957. Fernand developed a process of layering thin sheets of cellulose acetate, sometimes as many as 50 layers, and laminating them to make a multicolored “sandwich” of plastic. Lea contributed to the project, using “foreign materials,” such as lace or straw, for the top layer, giving the plastic an endless variety of looks and textures. Each sandwich went through several rounds of baking and cooling, a process that could take up to six months. Then the finished material was cut into unique shapes and stacked one upon another. The material was considered a modern-day marvel, and Lea used it to create unique compositions for costume jewelry from her infinite selection of the colors and textures possible with the “plastic.”

Lea first used the material to make unusual, fabulous buttons for designer fashions. Then she expanded into her distinctive, quirky designs that featured animals, cars, household items, even people. It did not take long for Coco Chanel to hire Lea to make jewelry for her fashion house.

After working with Chanel throughout the 1960s, Lea opened her own shop, “Léa Stein Paris.” Her designs became increasingly elaborate as she developed new methods of working with her chosen medium, plastic. She was greatly influenced by the Art Deco style that was “all the rage” in the 1920s and 1930s and by the earlier plastic jewelry made of Bakelite and Celluloid. She designed “Serigraphy” pins that looked like miniature paintings, usually with women in hats from the 1920s and earlier. (See “Favorite Collectibles” section.) Her abstract designs were adaptations from the Art Deco geometric look.

The vintage period of Lea's jewelry lasted only 12 years, from 1969 to 1981, when her company closed due to the “Asian invasion.” She could not compete with Asian jewelry merchants who not only flooded the market with beautiful, exotic pieces, but sold them at impossible prices. They had lower labor costs and fewer overhead expenses.

Lea went in a whole other direction during the 1980s—she managed a computer business. But a New York City dealer bought out her stock when her shop closed. He began selling it in the US. The result was that the failure of her business made her more successful and famous than ever! She returned to creating her beloved plastic jewelry after a break of nine years and has not yet stopped. She is still creating jewelry in her home in France, her designs as quirky and as coveted as ever. In fact, these modern pieces do not linger long on the secondary market; collectors snap them up as quickly as possible for their future value. Her jewelry has two periods: vintage from 1969 to 1981 and modern 1991 to present.

During her modern era, the popular designs include the tortoise, ladybug, and porcupine. If you come across a panther, do not pass it up. There are only a few that made it to market, because Lea and Fernand were not happy with the finished product. 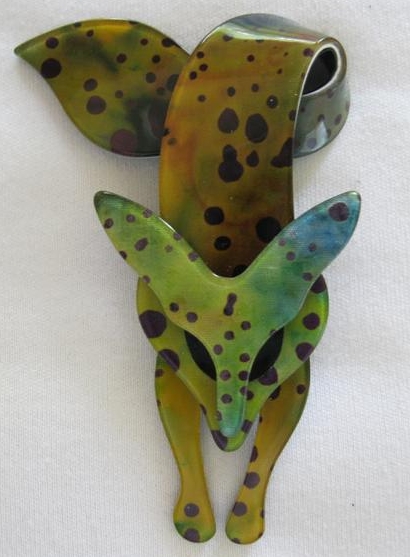 All of the jewelry is made from cellulose acetate (aka “rhodoid”), but Lea inserted many different materials into the acetate, such as:

1970s – No collection is complete without a fox. Some Lea Stein aficionados collect only foxes. This crawling fox pin/brooch was created in brown/tan color variations, completely with celluloid. Foxes come in countless designs and colors.

1960s – This is a very early piece with a straight pin and French trombone clasp, but it is not marked, as many of her pieces during that time were not.

1960s – Made completely with celluloid acetate, signed by Lea Stein.

Lea continues to create her jewelry. She makes one or two new pieces each year. Sometimes she re-creates her vintage designs. The fox remains her most popular piece as it has for decades. Her new jewelry is apparently only available through her, but I have been unable to find just how that is accomplished.

Etsy has a fabulous and fun selection of vintage pieces on the Lea Stein pages. Another excellent source for vintage Lea Stein Jewelry is eBay.