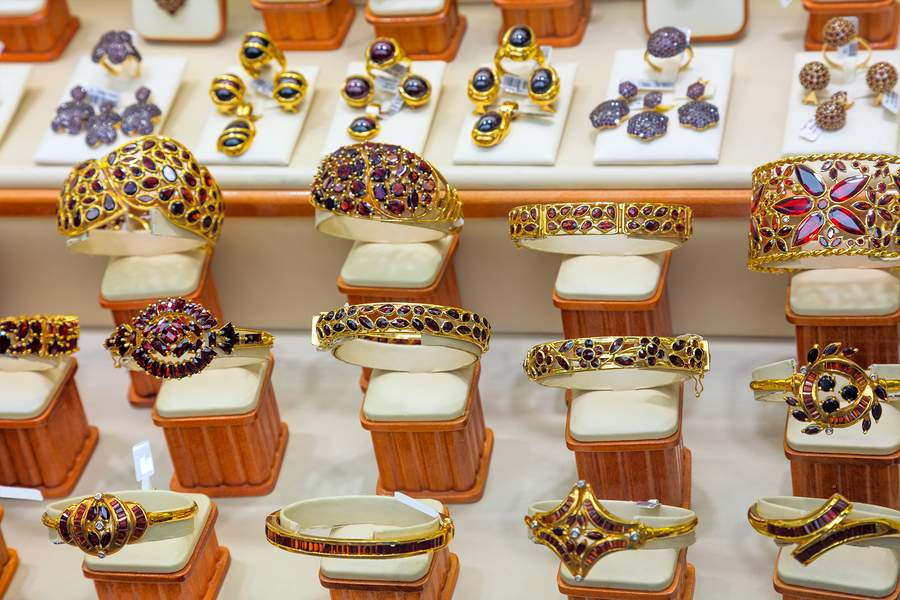 In the following table of contents, you will see the topics covered in this article. Click to be taken to that section, or just start reading from the top.

What is a Garnet?

Garnet is not a single mineral, but rather a group of several closely related minerals. The most widely known color of Garnet is dark red, but garnets come in a variety of colors including, orange, yellow, green, purple, brown, black, pink, and colorless.

When the term "Garnet" is used, it is most likely referring to the dark red form, other colors of garnet are given more descriptive gemstone terms.

Garnets have a variety of names including, almandine, andradite, demantoid, grossularite, hessonite, pyrope, rhodolite, tsavorite, spessartine, and uvarovite. Two types if green garnets are called tsavorite and demantoid. They are the rarest type of garnet and are more expensive than red garnets.

Garnets have a hardness of 6.5 - 7.5 on the MOHS scale. Garnets are never heat treated or enhanced, and the colors are always natural. Garnets are a naturally brilliant gemstone, and are valued based on the combination of carat weight, color, cut and clarity.

Garnet is the modern and classic birthstone for the month of January.

Some examples of Garnet varieties: The name “garnet” comes from the Latin word “Garanatus,” meaning “seedlike,” in reference to a pomegranate. The history of garnets are rich and vast, I will just be skimming the surface in this article. The oldest garnet jewelry dates back to 3000 B.C. A necklace containing garnet beads were found worn by a young man in a grave.

Red Garnet necklaces have been worn by the pharaohs of ancient Egypt, ancient Romans used carved garnets in signet rings to stamp wax seals, and they were popular with the clergy and nobility of the middle ages. According to the ancient Jewish text known as the Talmud, a garnet provided the only source of light on Noah's Ark.

A strong Garnet jewelry industry based on red pyrope garnets started in Czechoslovakia in 1500, and until the 19th century, it was the world's largest source of gem garnets. Traditionally, Czech garnets were set with a large number of small stones, which were close to one another like the seeds of a pomegranate. Fiery red garnets were highly popular in Europe and were frequently used for jewelry in the Victorian times, they were incorporated into everything from rings and brooches to buckles and necklaces.

The Symbolism of Garnet

Garnets are a symbol of the womb and are associated with women and the feminine life-force. They were worn as a protective talisman against negative energies. In the middle ages, garnet was used to enhance truth and faith, and to dispel melancholy.

Watch the Following Video to see the Colors of Garnet

Garnets come in a variety of colors, and the purer the color, the higher the value.

The purer the color and the closer it is to the spectral red, the more valuable the stone. Also, the distribution and depth of the color within the stone will affect its value. A lighter red is less valuable than a deeper red. Some gemstones show streaks or bands of lighter or darker colors when viewed from the top or the sides. Consistent color throughout the stone is more valuable.

Cut refers to the quality of how the stone is cut, not the shape it is cut in.

Garnets are faceted to reflect the light entering the stone and bounce it around to show off the gems brilliance. If the facets are not lined up properly, the light leaks out and the stone loses some of its brilliance.

Many garnets are cut into standard shapes and sizes for use in jewelry. Red garnets are often cut into cabochons and beads, they commonly have high clarity and are very transparent. Some garnets, such as the fine-quality tsavorite are cut into shapes that maximize the stones carat weight. Demantoid is often cut to exact proportions that allow the best possible display of its fire.

Garnet is a type 2 gem. Type 2 gems are usually found with inclusions and a high quality specimen would be eye clean rather than almost loupe clean as in the case of a Type 1 gem.

Garnets with visible flaws are not as valuable as stones without flaws.

Garnets can be found in all sizes and weights. Some garnets, like almandine, are common in larger sizes so there’s no dramatic rise in value as size increases. Other garnets, such as demantoid and tsavorite, are more commonly found in small sizes, so their value goes up significantly with size. Garnet Vs Ruby - How to Tell the Difference

Red garnets and rubies can be very similar in appearance to the untrained eye. Because rubies are more valuable than garnets, garnets can sometimes be passed of as rubies. Luckily, there are ways to tell them apart.

If you hold up your stone against a bright light source, you can examine its spectrum. The spectrum is the rainbow created by moving the stone around.

Also look for double rainbows within the stone.

The color of red garnets and rubies is often slightly different. Vintage jewelry is a huge market and it can be hard to sort through the choices. You want to make sure you are getting what you pay for. Always be wary if a price seems to good to be true - because it probably is.

Shopping online is a great way to take your time to find vintage jewelry. I personally love to shop on Etsy for my vintage jewelry; there are many wonderful and knowledgeable sellers to browse through.

Where to Buy Vintage Garnet Jewelry

I will list my favorite shops on Etsy for buying vintage garnet jewelry. These shops all have excellent customer feedback, GIA certification, and excellent return policies.

Buying vintage garnet jewelry is not too difficult of a process. Being armed with the knowledge from this article will help you navigate the vast selection that is out there. Work with your seller to make sure you are getting high-quality jewelry, and you will not be disappointed.

If you have any questions, please leave them in the comments below! I always answer and am here to help.